Only four small appearances over six months, is the early 60s Krypto Kraze dying down? If the Super-Pooch an advantage or a liability? Let's check...

In Superboy #107 (above), crooks head to Smallville with Green Kryptonite in their trunk. Krypto gets owned and then never returns to at least warn his master. FAILURE

In Adventure Comics #313, he and the Legion of Super-Pets stop Satan Girl, whose Red K powers work only on humans. FEAT

In Superman #165, a meteor is about to hit Lois Lane in her spaceship and Krypto is sent away even though I'm sure he could help. What?! FAILURE 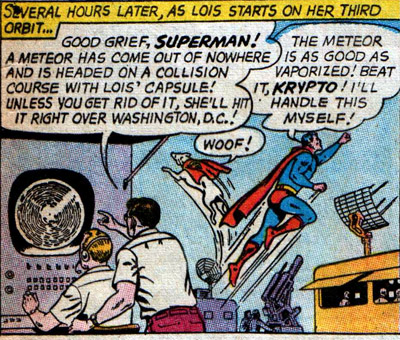 Ah, but it turns out everything in this story is a big super-hoax in which Saturn Girl plays the part of the sorceress of myth Circe, and Krypto digs out the fake tomb... and what does this have to do with Lois in a space capsule again? Whatever. I guess it switches the rating to FEAT. 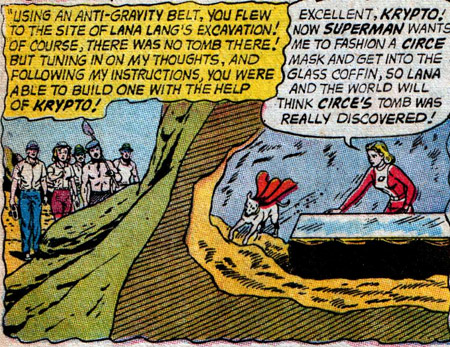 Finally, in Action Comics #309, Krypto shows up to take part in a television variety program celebrating Superman's life. I guess that's a FEAT, if a rather silly one.

Note that two of those appearances are as part of the Legion of Super-Pets. Is he transitioning from solo star to team player?
Comics Krypto Legion Silver Age Supergirl Superman