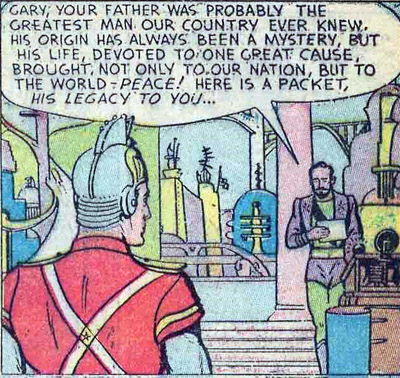 Gary Concord, the Ultra-Man! New character! Gets the cover feature and the first story! And after Hop Harrigan is the second All-American feature to get a Who's Who entry some 50 years hence! The year is 2239 A.D. - the FUTURE of Earth-2, and helmets are in fashion... On the 4th of July celebrations, Gary gets a the full account of his highly-celebrated father's story and discovers he is the son of a time traveler. The strip then goes on to tell the father's story, but not completely, it ends on a cliffhanger... So proto-DC has a new hero, but we're going to spend a number of issues telling his DAD'S story?! 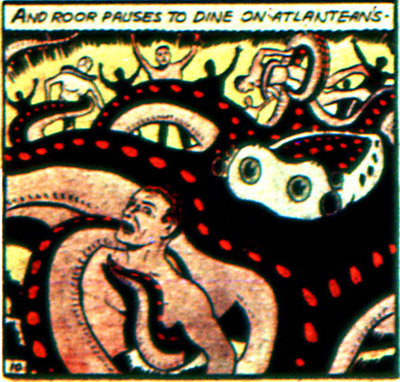 Superman's all well and good, but at this point, his stories all kind of look the same. He fights common criminals or the odd bald scientist, lifts a few cars over his head, you know... But buried at the back of each issue of Action is the wildly imaginative Zatara strip. This month, our favorite stage magician (at least until the Man They Call Reveen Zatanna) is in Earth-2 Atlantis convincing Roor the cute killer octopus to devour sponges magically disguised as Namor. After Roor take a long drink of water, the sponges fill up and he explodes. #Sad!

From Cotton Carver: "The Revolt of the Pirates" by Gardner Fox and Ogden Whitney, Adventure Comics #43 (October 1939)

The famous explorer (his strip ran in Adventure from issue 35 to 65) once made his way to the Skartaris of Earth-2 (called Mikishawm) which was, though feudal, decidedly more high-tech than our own Inner Earth.
Comics Golden Age One Panel