'Tis the season and all that. Our little group of beloved friends had our gift exchange last night, and whereas I gave a number of games, books and comics, I did receive some as well. Relevant to this blog's interests then... Games: Looterz, Samurai Spirit, Lego Dimensions-Ghostbusters and Aquaman. Books: emoji versions of MacBeth and A Christmas Carol. Comics: Junji Ito's Cat Diary: Yon & Mu. Movies: Swiss Army Man (I've been wanting to see it since forever!). Misc.: Elyse nitted all of us some patterned washcloths, I got the Dalek one (below). Thanks to my many podcasting partners for the lovely things! 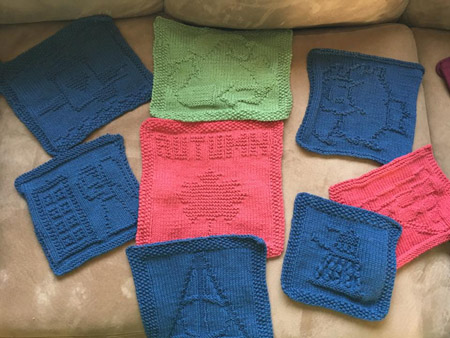 At the movies: Nocturnal Animals is a dense, rich film nominally about a woman (the always excellent Amy Adams) who receives a novel manuscript from her estranged ex-husband (the equally good Jake Gyllenhall), which takes her down memory lane and a deserted highway in West Texas. Memory and the hicksploitation thriller are treated as equals on screen, and on at least one level, the film is about how we invest ourselves in fiction, and make connections that aren't necessarily expected. Adams' character once told Gyllenhall's that he shouldn't write about himself, but perhaps she shouldn't READ about herself. But at its core, Nocturnal Animals is a drama about discomfort. Its (to me innocuous) opening sequence had several people leaving the theater in the first 2 minutes, and the thriller elements (bullying on a dark road, the persistent threat of rape, etc.) create more. And this is indeed about characters who are uncomfortable with themselves and their choices, who are filled with regret and powerlessness, and hopefully learn to move on. And for all the acting power brought to bear by the two leads, the supporting players - Micheal Shannon (well on his way to becoming one of my favorite actors) and Aaron Taylor-Johnson - steal the show.

Netflix: Disney's Treasure Planet is an imaginative pirate romp based on the Robert Louis Stevenson original (which I haven't read since I was a boy, I admit), with some strong action beats, a relatively adult flavor because of the source material (people do die), a cute alien sidekick for the kids (Morph), an all-star cast, and a fully realized science fantasy world. So why isn't it an animation classic? Part of it may be the dated CG environments that are noticeable in combination with Disney's high standard of character animation. There's also the film's resistance to going full musical, an artifact of the early 2000s, so it brings you to the edge musically and lets you down with cheesy rock ballads that though written for the film, are just superimposed on the action. But if you can ignore the technicals, it's still a grand adventure that despite the vintage pedigree works well with spaceships, black holes and Precursor technology.

The Man from the Future is a Brazilian time travel comedy that has a lot of fun stealing from other films, especially Back to the Future 1 and 2, but with definite winks at Timecrimes, Terminator, and others. Essentially a crazy love story that doesn't take itself too seriously, the protagonist must, if he's to get the girl of his dreams, solve the puzzle of his life. He goes back into his own history several times until, well, you'll have to watch it to see just what he's able to manage (or learns he should even try to manage). Though some of the science is necessarily bonkers, it still has a scientific spirit in that our guy figures things out through trial and error. There are weaknesses. Some of the Brazilian references to the past will go over most heads, the acting is a bit... big at times, and the subtitles are filled with grammatical errors. But these are minor complaints, the movie is actually a lot of fun.

I'm not sure the Australian indie Terminus knows what it wants to be... It evidently comments on today's America (and by extension, the Western world), with a war that's out of control in the Middle East, Rust Belt hardships, and financially desperate people. In a suffering small town falls an alien pod that heals people, even regrows the limbs of war vets. Shades of Body Snatchers at first, you start to wonder if you're actually watching Cocoon and then Contact (the aliens make us build something), and though played as sinister, they may actually be doing humanity a good turn. But the film gets too caught up in hiding its hand from the audience for us to care all that much. The war in Iran being called Operation Terminus, a seeming key to unlocking the title's secrets is mostly a red herring, for example, and the fact this isn't an alien invasion retread in the end doesn't mean you didn't actually have to watch all those tired tropes play out before the twist. In trying to be clever, Terminus kind of loses the plot. Meh.

Self/Less has a very interesting idea - that for a price you could transfer your mind from your dying body to a fresh one, but what happens when you discover the truth of where those bodies come from? - but then devolves into a not very memorable action thriller starring Ryan Reynolds. Plenty of missed opportunities here seeing as he had the comedy chops to make the transition from an old body to a new one much funnier, but I also can't understand why his older self, Ben Kingsley, affected such a strong accent only for Reynolds not to then have it. It's already pretty difficult to recognize Kingsley's character in Reynolds' (would a hard one-percenter have any of the opinions he has as a young man?), and they go and create a discrepancy like that. I do appreciate how the title is a four-way pun that encapsulates the film's themes, but Self/Less is just too badly thought-out to really gives those themes their due.

Young Ones is a family saga set in a near future when water has gotten scarce and farmland is dying, shot like a washed-out western (though those stylish flourishes are perhaps a bit too precious). Three chapters each focus on a different man, starting strong with the ever-watchable Michael Shannon, before moving on to son-in-law and son. The catalyst in each of their stories is the main science fiction element, a walking machine that does the work of a pack animal, but also watches, unemotionally and relentlessly, with its electric eye. There's something of a lull in the middle, perhaps, but Kodi Smit-McPhee, who isn't one his first postapocalypse - just look at this kid's filmography - is the heart of the film and carries you through to the end, his chapter actually managing to expand the wide, but in reality tiny world of the film whose theme is blame, and just how we can stop sin from plucking on sin. The "machine" may be the only one able to.

Upside Down is a fairy tale wrapped in absurd science fiction trappings, about a Romeo and Juliet separated by physics. In this science fantasy, two planets hover close to one another, a world of have-nots Down Below, and of haves Up Above. These worlds are so close to one another, a building can span the distance and create the means to go from one to the other. The silliness fairy tale element is that matter from one world will always be drawn to that world - you can't fight gravity - which is a fine excuse for mad visuals of people falling upwards, ceilings as full of people as floors, and so on. Visually, it's often a treat, effects done in that painterly style that made me think of Zack Snyder (only without the cynicism). But this story of one man's quest to break the chains of gravity so he can be with the woman he loves often falls prey to cheesiness. The modern soundtrack is terrible and takes you out of this other world, Jim Sturges' narration is totally lame, and there are just enough longueurs to let your mind drift off and wonder of Kirsten Dunst is being typecast because she knows how to do the upside down kiss. And never mind the climactic action beat that looks like a Mario Brothers game. I did enjoy the world building, which kind of mixed elements of Gattaca and Brazil, but it's a pale reflection of those films.

I Origins is another Mike Cahil/Brit Marling original (Another Earth), one that test the "faith" of atheistic scientists who ask people of faith to revise their world view based on their research. Can they do the same when the spiritual world seems to intrude on their data? The plot follows a pair of scientists in their efforts to prove that the human eye evolved and wasn't some sort of "intelligent design", one of them ignoring the sheer amount of coincidence that led him to the love of his life parallel to this. In the second part of the film, the technology developed leads he and his wife to some inescapable conclusions. As with Another Earth (and other Marling indie genre pictures), I Origins is visually and symbolically rich, and rewards the attentive audience member, not just to stay ahead of the game, but to draw the right conclusions at the end. An ode to open-minded skepticism.
Geekly roundup Holidays

Anonymous said…
Surprised nobody seems to be bothered by Nocturnal Animals weird slant on abortion shaming.
December 18, 2016 at 12:20 PM

Siskoid said…
Anon: I'm not sure that's what's happening there.

Tony: And all it would have taken is a line of dialog that said accents were part of muscle memory, or actual speech therapy as part of the convalescence. As it is, it's a distracting plot hole. I can believe I'd have to retrain myself to speak with a new mouth, but total loss of accent when cognitively controlled by another mind?

If that mind exists, of course. If you're just brainwashing people into thinking they're other people, then the movie falls apart completely because there's no real point. But even if we deduce this logic, which is fine, it fails the dramatic needs of the story. It's not played as a reveal (ahhh that's why he doesn't have the accent), it's played like his mind's really in there, but is rejected by the body over time unless anti-rejection drugs are taken. Self/Less is just slightly out of focus on those points.
December 21, 2016 at 10:00 AM