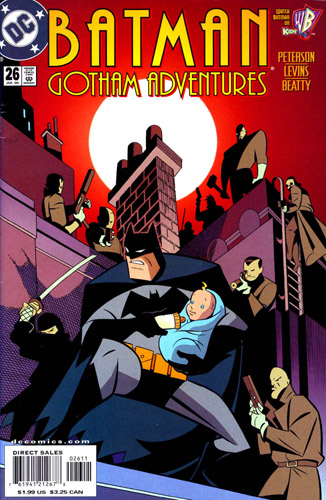 IN THIS ONE... Batman protects a baby wanted by all the mobs and the FBI.

REVIEW: Let me start with a couple of small caveats before I plunge into my glowing review of this issue. First, the surprise revelation that "Kristov" is a person (albeit a baby) isn't much of a surprise at all, since the MacGuffin has a person's name. So it seems entirely silly that Batman would be looking for an "it" instead of a "he". And the idea of encoding state secrets in a baby's DNA veers perhaps too much into science fiction for an otherwise grounded Batman story, especially if that DNA can be "read" as easily as shown. But like I said, these are minor failings considering what else we get.

Batman fighting crime with a baby in his arms, trying to protect the little tyke not just from "all the mafias", but from the Feds and possible threats like Ra's al Ghul as well, makes for interesting visuals. It's sweet and weird and badass all at the same time. And it's not just crime. Batman has a busy night. I love the shots of him doing things like driving a city bus to the hospital as its driver struggles with a heart attack, or his putting a blanket over a homeless man. And then there's that scene where he disarms a mugging by simply standing there with a baby, daring the criminals to do anything that would put it in harm's way and incur his wrath. And then how even those crooks know more about taking care of a baby than he does, and give helpful advice. And Batman changing a diaper on a roof top, guided by Alfred? Brilliant.

We were at Medium-High, and then it turns out Batman let the FBI take a sample of his blood, passing it off as the baby's, to "prove" little Kristov really didn't have state secrets in his DNA, risking that one day, the Feds could match it with Bruce Wayne's and blow his secret identity. All so the kid can have a normal life with his parents. And that's beautiful.

REREADABILITY: High - A lovely story with some cool and unusual moments, but also a lot of heart.
Batman Comics DCAU

American Hawkman said…
My headcanon is that this is where Amanda Waller got his secret identity from.
January 6, 2017 at 11:17 AM