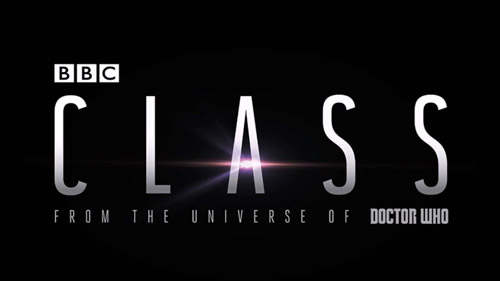 IN THIS ONE... Class starts when Shadows attack Coal Hill Academy, with special guest appearance by the Doctor.

REVIEW: Coal Hill School has been renovated and rebranded as the Coal Hill Academy, and it's been involved in some many temporal crises by now, it's basically sitting on a rift in space-time. Basically, it's Torchwood meets The Sarah Jane Adventures, and an overt rip-off of Buffy (which Doctor Who has been using for shade since the series came back in 2005), and it immediately makes me question just who this was made FOR? If Who's other two spin-offs were really to meet somewhere in the middle, its tone would be, well, Doctor Who. Instead, we have a school setting and teenage protagonists, but mild cursing, a pointless and gratuitous reference to someone fiddling with himself, and gory violence (Ram at least has the courtesy of being traumatized). The Doctor never appeared in Torchwood, probably so the character wouldn't have to exist in the PG-13 world where younger viewers might want to follow him; he stuck to SJA instead. But Capaldi does show up to send the Class series off, and that just feels wrong. You can definitely feel the pilot struggling with its tone, harking back to Torchwood Series 1. It's almost as if writer/showrunner Patrick Ness (A Monster Calls, the book) had a mandate to include post-watershed elements.

So okay, there's nothing particularly original about the set-up, but the show may live on the strength of its cast of characters. The fact that I wasn't sure of each of their names after it ended isn't a good sign, but I do find it interesting that each of the kids is essentially a companion type who normally might have traveled with the Doctor. We have Tanya the whiz kid, Ram the jokey jock, April the kind and enthusiastic organizer, and Charlie the alien prince passing off as human (between him and his treacherous guardian Miss Quill, I couldn't help but think of Turlough). All of them brave, all of them resourceful, and most of them sort of outsiders. The episode is pretty efficient in its introductions, with each character not only being given at least a stock personality and interests, but also a distinct family situation. I find myself interested in at least some of the parents, and there's a lot of diversity among the larger cast.

The most intriguing, by design, is the Charlie/Quill combo since they are aliens, dumped on Earth after their world was destroyed. Essentially playing the Luke Smith role, Charlie is a fish out of water pretending to be from Sheffield. His mama bear is the snarky and sarcastic Miss Quill who is really annoying as a character. As a teacher, she's a terror, but even if the show wants to "melt her heart" eventually, she just sounds a single note in the opener (though her prom signs were a nice touch). She's a terrorist (sorry, freedom fighter) punished with a bond (sorry, enslavement) to the prince, which makes her unable to ignore his protection, use weapons, and other limitations. Charlie keeps a secret interdimensional storage space/portal that holds the souls of his people, which apparently can be used as a weapon, so that might turn up again. And whether he is gay or simply unaware of gender, his asking another boy to the Autumn Prom - perhaps playing on "feeling like an alien" teenage angst - adds another wrinkle. Ram gains a futuristic prosthetic leg by the end of the episode, which may play a role (and looks cool), April is obviously pegged as the heart of the show (but see below), and Tanya is sadly marked for technobabble - I pity her already. Too early to say, but they're a generally likeable crew. 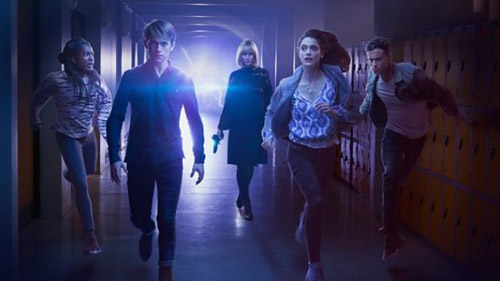 As for the plot, Prince Charlie gives the Shadowkin a reason to descend on the school. As monsters, they sometimes look cool, sometimes like cartoony effects, and sometimes like rubber suits based on the Swamp Thing. They are, in fact, much more effective when they are simply shadows, in particular that sequence where one holds down April's hand. Through weird science that could only come from the Whoniverse, the Shadow King and April get to share a heart, phasing in and out of each's reality, which I guess sets us up for more Shadow action down the line. How her particular heart condition will manifest itself in other episodes remains to be seen, but other than give the group a warning sign in time for the finale, I wonder if it was necessary beyond the climax.

The Doctor shows up just a little too late to save Ram's date, which is more or less where the episode threatens to jump the rails. Rachel's death, her insides splattering suddenly on Ram's face, feels tonally wrong, both before and after the TARDIS lands. Before, this is a Sarah Jane Adventure with slightly scarier monsters and older teens. After, the Doctor shows up and his world is a lot less bloody even if it isn't any less lethal. And that poor girl really didn't deserve that kind of treatment. Cutting a football star's leg off (temporarily) has much better shock value and could have been done without the disgusting kill shot. If the Doctor had materialized a bit sooner, we could have moved more rapidly to a "talky" resolution, the kids being brave and standing up to the enemy, and the Doctor's warm pride in humanity (give or take a wave of the new sonic screwdriver, which is going to take some getting used to - I don't think I like that square design). The inclusion of the Doctor is a bit problematic because 1) it undermines the idea that this gang can handle the avalanche of problems Coal Hill is about to get, and 2) there's a strange callousness to the Doctor essentially washing his hands of Earth and the school by assigning this makeshift group such a mission. I do like how he makes a student's death Miss Quill's responsibility and prolongs her punishment. The fact that this is Capaldi's Doctor doing all this kind of justifies it. There are Doctors I couldn't imagine giving this show such a send-off. AND there's a pretty terrific moment when the Doctor sees the names of the school's dead and disappeared and fails to recognize Clara's, though it definitely bugs him. See Theories for who else is named on that memorial.

Talked a lot about story and character, but what about the look and sound of the show? Well, the direction likes to gives us odd perspectives, which I always like in my "alien invasion in domestic environments" shows, and I like the comedy editing of Charlie's story. The effects are uneven, but the three worlds we see (his, the Shadows' and his people's afterlife) are all distinctive and beautiful. Did everyone where school uniforms only in April's imagination? Because that was pretty hilarious. The opening sequence zooms us in on psychedelic horrors images - I neither like it nor dislike it - but while I wasn't surprised Class had a more poppy sound than other Whoniverse shows, the theme (Alex Clare - Up All Night) did surprise me as it went reggae at the end. I'm not sure what to make of it, honestly. And perhaps that's true of the show in its entirety.

THEORIES: Why did they need to rebuild Coal Hill School and rebrand it? Maybe it's just normal expansion. It was already pictured as small campus, and indeed, its address on Foreman Street is at odds with Remembrance of the Daleks' contention that it was on Coal Hill Road. It may be on both now, with different entrances for the Middle School and the Academy (High School) and its glassy modern facade. But the Whoniverse - and this part of Shoreditch in particular - is a dangerous place. Could there be an unseen story/event where, especially in the wake of Clara's absence, the school was damaged in some alien intrusion? The clue may be on the school's memorial. Obviously, Clara and Danny Pink are on the wall towards the end, but so is Mr. Dunlop's, a teacher from Series 9's The Magician's Apprentice. How did he die? Now, there is some confusion on the board, because we saw him alive and well AFTER Danny's funeral, but his name appears earlier, but he has to have died (or vanished) before the 2016 school year in which this is set. There's an untold story there which may account for the school requiring emergency renovations. Who else can we spot on that board? Well, very early on are A. Okehurst, J. Gibson and D. Hatcher, characters killed by the Cold in the first Doctor Who novella "Time and Relative" which took place before An Unearthly Child! As did Remembrance of the Daleks, of course, so the school's then headmaster H. Parson is also included. Foreman, S. then of course refers to the Doctor's granddaughter Susan.

REWATCHABILITY: Medium - There are things I like to the set-up, but if the question is whether I'd be watching this if it weren't part of the Whoniverse, I'm afraid not. Too derivative and tonally inconsistent.
Class Doctor Who

LondonKdS said…
"Academy" isn't just a rebrand, it refers to a system since 2000 where English (specifically English, not in other parts of the UK) schools with "academy" status can operate independently of local councils, under the direct but looser supervision of the Department for Education. This often involves some kind of private-sector or charitable involvement, and there are sometimes allegations of hidden money-grabbing or ideological motivation involved.

Knowing this political background is necessary to follow the implications of some future developments in the series, which I'm saying nothing about.

Other than that, it's hard to comment further without spoiling. But I and many other fans thought that this first episode was the worst of the show - in Britain the second episode, which is much better, was released on the same day which helped.
January 23, 2017 at 8:17 AM

Siskoid said…
Thanks for the background, Toby! I suspected the word implied something as to the workings of the school, or it curriculum, or something, but it's interesting that there might be actual socio-political commentary... It's all going to fly over my head, isn't it?
January 23, 2017 at 8:31 AM