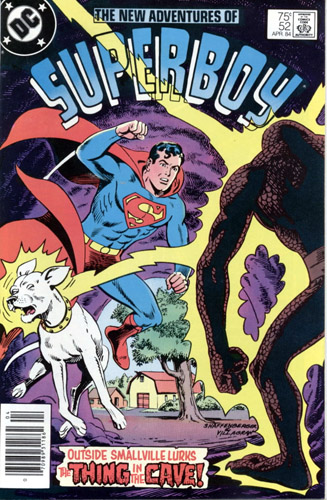 In the final months of New Adventures of Superboy (it would end with #54), Krypto shared his last New Adventure with Superboy, a strange tale about Smallville's resident hermit, who Pa Kent remembers even HIS Pa talking about how the old mute lived in the woods when HE was a boy. Well, "Old Dave" comes into town for supplies every once in a while, and this day, needs saving by who else but the Mutt of Steel.

As the day goes on, more machines go haywire, and Superboy sure is glad his dog is around to catch cars and such. 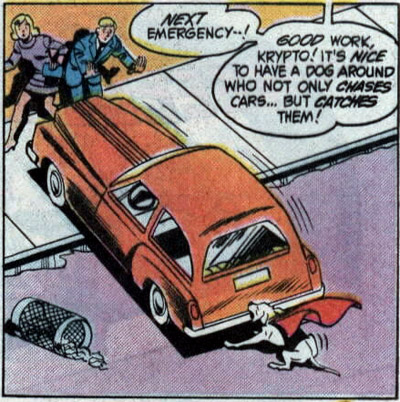 Well, eventually the Kryptonian duo follows the clues to Dave's cave, since the old coot might somehow be responsible. Well, would you believe he's a stranded interdimensional alien? 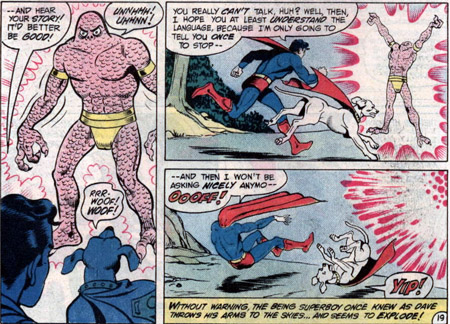 Smallville is a real magnet for alien types, isn't it? Anyway, dude's all glowy and Krypto gets absorbed in the glow, which forces Superboy to pressure the energy back into the alien (I dunno, I guess it's science), and to his relief, Krypto's fine. 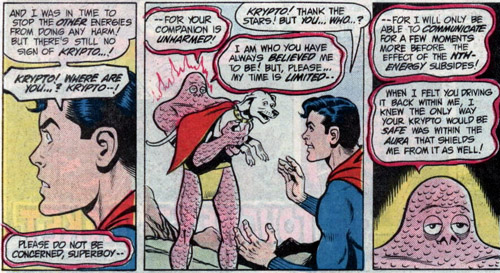 His energies dampened, "Dave" can finally - and telepathically! - tell his story. He was simply teleporting (as you do), when interference sent him to 19th-Century Earth, powerless to teleport away. Finally, there's enough electricity in the area to recharge his batteries, but the energy interaction has proven dangerous. As Dave's power of speech disappears once more, Superboy makes him the same promise he once made Mon-El: SOMEday, he'll free him from his prison. (I don't think he ever did, did he?)

Then in New Adv #53, Krypto gets one last cameo: 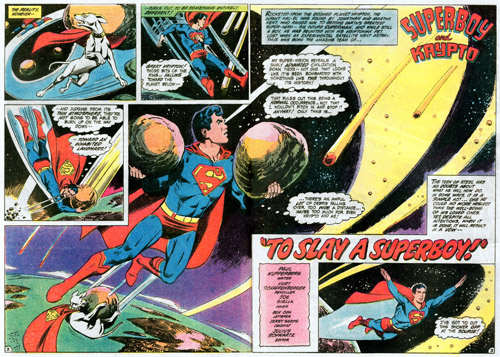 Superboy of course interrupts playtime to save the planet below, and that is THAT, for the canonical pre-Crisis adventures of Smallville's Super Dog. We're not far from his last adventure with SuperMAN either...
Comics Krypto Superman