Al Pratt makes his debut in All-American #19, but not yet in costume. After being treated a bit like "Mac", the scrawny weakling who gets sand kicked in his face and later becomes the Hero of the Beach in all those Charles Atlas regimen ads, he trains under boxer Joe Morgan (who will eventually be credited for training Wildcat as well). Despite his size, he goes back to the villains and kicks their asses, leaving "The Atom"'s calling card. You gotta get some better threads, there, Al! 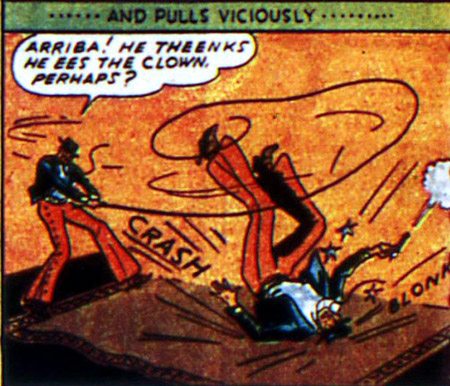 From The Whip: "The Orphanage Benefit Part 2" by Gardner Fox and Sheldon Moldoff, Flash Comics #10 (October 1940)

The Whip versus a look-alike, which has nothing to do with the Atom, but I did want to finish up the books that were on the stands in August of 1940. And I do so like the Whip. The action is definitely more fun than that of the Flash or Hawkman at this point.
Atom Comics Golden Age One Panel

Anonymous said…
We had a The Atom here on Earth-Prime:

Anonymous said…
I just noticed, even the comic refers to its protagonist as "The Mighty Atom", which is Joseph Greenstein's exact professional name.
December 14, 2017 at 3:47 PM