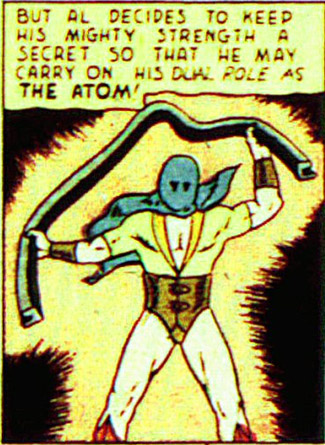 Al Pratt gets a costume in his second appearance, and though he's just a short boxer, the comic decided that was enough to give him improbable strength, as the above panel can attest! I wouldn't want to meet THIS guy in the ring!

Hey, maybe it's symbolic. He's not quite so insanely powerful one the narrator's done retelling his legend. 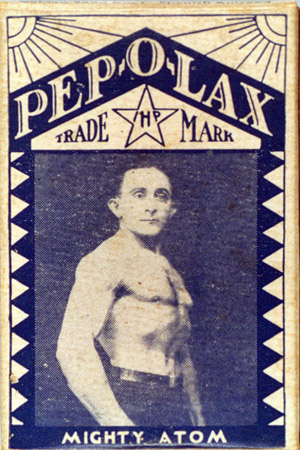 At 5'4" - 3 inches taller than Al Pratt - Greenstein nevertheless made a name for himself as a diminutive circus strongman billed as "The Mighty Atom", and was apparently able to bend horseshoes and nails with his great strength. His interest in unlocking the mental powers associated with strength was sparked by an incident in which a Texan, obsessed with Greenstein's wife, shot him between the eyes at 30 feet. He somehow survived, the bullet flattened on his skull! He was still doing incredible feats of strength for audiences at age 84, when he finally succumbed to cancer. That's some JSA vitality right there!

Further parallels with the Golden Age Atom include the story of his seeing a "No dogs and Jews allowed" sign on a building, and having fled Poland exactly because of this kind of bullshit, went to get his baseball bat, and proceeded to knock it off. 20 Nazis rushed out and jumped him. They didn't fare well, several ending up in the hospital. He also taught the NYPD jujutsu.

And it runs in the family. Just a couple years ago, Greenstein's 93-year-old son appeared on American's Got Talent pulling a 3500-pound car with his teeth!

So wait, how many Justice Society members were real people?!
Atom Comics Golden Age One Panel

Mr. Morbid's House Of Fun said…
Wow. Never heard of this Mr. Greenstein until now, but yeah I'd say he REALLY was the real-life Al Pratt based off the information you provided. Ha ha, no kidding about how many other real life JSAers' existed. Well at least the non-super powered ones like Dr. Midnight, The Sandman and Dr. Midnight.
December 19, 2017 at 7:13 PM