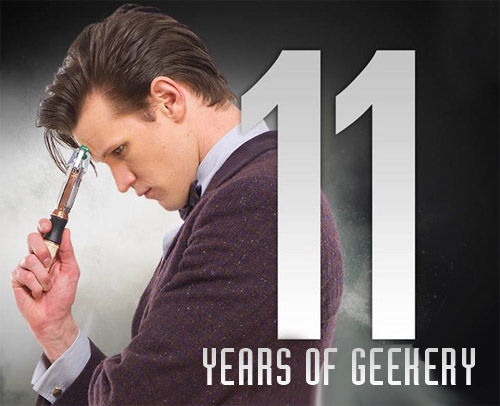 Eleven years ago, I sat down with Blogger and started this adventure. For most of that time, 2 posts a day in addition to any other projects I might have had. It's kind of like having discipline, but I kind of see it as another way of goofing off. In that time, I've posted 7869 times. You've probably not read that number of posts, but whether this is you 7869th time on the blog, or the first, I'm using my bloggerversary to thank you all for your patronage. You bastiches are keeping me in the game.

Down to a single post a day
Taking stock of the last year, 2017 was when I cut down to rarely more than one post a day. Back in late February, I was facing increase pressure at work and decided to drop my DCAU reviews. Doing daily reviews is why there were two posts a day, more or less to prevent the blog from being (originally) Trek-centric, or (later) Who-centric, X-Files-centric, etc. When those pressures let up, I found I preferred the one-a-day schedule. If reviews of long-running franchises is your thing, they're still around, just a slower pace. We're getting new Trek now, and of course, Doctor Who is heading for a big shake-up next year (which I've been calling for for YEARS now, this blog is full of proof, including this past year's The Companion Is the Time Lord feature that cast a lot of actresses as the Doctor).

Year 11 Highlights
In the real world, 2017 was even worse than the terrible 2016. Meanwhile, on the blog:
-In addition to a sizable chunk of the DCAU, I also regularly reviewed Doctor Who, Star Trek Discovery, and Class.
-On the podcast front, I kept up my end of the bargain with the Fire and Water Podcast Network, and guested on a fair few others. Recently, I've been blessed by the Wright On Network, invited to take part in many episodes of Straight Outta Gallifrey. Seeing as I don't have a Doctor Who show of my own, it's a great place to drop some Whovian knowledge and opinion!
-Movies, movies, movies! Perhaps one of the things made possible by dropping daily reviews is that I've been able to watch a lot more movies. They turn up as capsule reviews (much more manageable) every Sunday. Indeed, I've run (and in some cases, am still running) a number of "movie marathons" to guide my cinematic path - Movies I really ought to have seen by now, Movies with Doctor Who titles, and December's Cons & Heists.
-Krypto's just finished his second year as a regular Saturday feature (following in the foot steps of Superman and Jimmy Olsen) and he won't survive a third. We're in the 80s now, Crisis is on the horizon, and grumpy old John Byrne didn't want ANYTHING but Superman to survive Krypton's explosion, so not as many opportunities for the Dog of Steel in the next few decades. What next for Saturdays after that? Keep your cape on, kid, that's a LONG ways away.
-I've revived a couple of comics indexing features, specifically Dial H for Hero which I'd dropped sometime in the New Adventures of Superboy era. Racing towards contemporary day now, and should hit the 2000s' H-E-R-O series soon.
-Some might remember my New Year's resolution to play more board games, then review them. Seems to have dropped off my radar in the second part of the year, but hey, t'was fun while it lasted.
-One type of text that recurred several times falls under the heading of "Geeks Anonymous", sharing stories and anecdotes about what makes a capital-G Geek. 2017 was the year of exploring exactly what that meant.
-The most ridiculous thing to happen to me this year, geek-wise, was a petition started by one my sillier friends to make get me cast as the new Doctor. I'm much happier with the choice they actually made.

So, what's next?
In addition to what I've already mentioned, you can expect new-ish features to see more action - RPG Licensing Fun, Who's Who in the Crisis, etc. - and of course, One Panel proceeds apace. While Tuesday is "Canada Day" at the Fire and Water Network, and thus my featured post for that day, I'm going to endeavor to always add extra content on days where I post my guesting on a pod. That way, people who are principally readers will have a little something on those days, to avoid weeks where three podcasts may well come out. Otherwise, having resurrected Dial H means I might resurrect other long-running features like my coverage of Amalgam comics, Batman and the Outsiders, and/or Brave and the Bold and Marvel Two-in-One. Who knows, I might even jump into a major sci-fi franchise with reviews, although perhaps keep them to once a week. In short, I haven't made definitive plans for 2018 because I'm in the middle of so many things already.

tomg said…
Thank you for all of your projects. I read your work on several sites (such as the Legion of Superbloggers) and I always enjoy unwinding while reading your posts.
December 9, 2017 at 7:00 AM

American Hawkman said…
Happy anniversary! I'm still very grateful you revived Dial H, and hope we kick back into the DCAU reviews someday... I liked those.
December 9, 2017 at 1:26 PM

Anonymous said…
Been a huge fan of your blog for a very long time, glad it's as rewarding for you as it is for us. I feel kind of bad when there's a post of yours I can't say anything useful about, because that can be taken as lack of interest -- but rest assured, even the posts where we don't add any observations, we receive them eagerly and gratefully.

Brendoon said…
It's been great!
I'm amazed you've been fitting this in with any work at all.

I've been especially enjoying the Krypto's...
It's been a surprise how many of the bronze age ones I've read.
I'd thought my childhood "comic education" was FULL of holes; more holes than a zombie in a shotgun range in fact- but not, it seems when it comes to Krypto.

Anonymous said…
It's truly a delight every time I visit the blog. Thank you for sharing a bit of yourself each day with us.

LiamKav said…
I completely understand wanting to cut back on your posts. You're giving us something to read in our spare time for free! Any complaining would be churlish.

I do miss the daily reviews, and was looking forward to you getting to Justice League. Have you considered maybe alternating between a review and something else each day? Or is it the actual watching of the programs that's the big time investment?
December 15, 2017 at 8:31 AM

Siskoid said…
It's a number of things. Watching a show takes time, but no more than most articles of a similar size require in research (though it's gotta be done in one go, as opposed to a bit here and there). The commitment is probably worse, knowing you have to get through one every day (or every other day, with some measure of frequency anyway), and that's especially tough when you're not engaging as much with the material (Voyager would be the earliest example, but in the DCAU, I was in the middle of Static Shock, with The Zeta Project on the horizon).

LiamKav said…
Maybe do the Batman Beyond "Return of the Joker" movie and see how that makes you feel? But whatever you do is cool.
December 18, 2017 at 7:58 AM