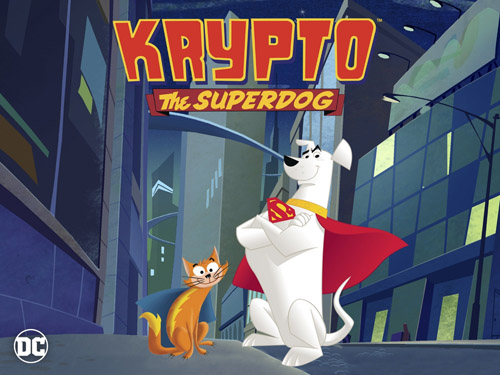 I'll admit I haven't seen a whole lot of the Krypto the Superdog animated series, but it just wasn't made for me. By people LIKE me, maybe. It fully embraces the super-pets concept as I would, and rummages around DC's archives for dogtastic co-stars. BUT it's clearly pitched at a younger audience, and I just can't get into the silly humor and safe action.

In the series, Krypto is handed off to a 9-year-old boy called Kevin Whitney, because this era's Superman will always be a deadbeat dad to his dog, and only Kevin knows Krypto is really "Superdog!", an identity he transforms into by running around in circles at super-speed. Samuel Vincent voices Krypto with a younger timber than I expected - dogs have gruffer, older voices in my head - as indeed, all the animals can understand each other in this, and thanks to a universal translator thingie, so can Kevin. Much as it was in the Silver Age comics, when Krypto goes out on his own, it's usually to help other dogs, fight space cats, etc. What pleases me most is the animal supporting cast that becomes increasingly important to the series: Streaky, Ace the Bat-Hound, and all the members of the Space Canine Patrol Agents (as the Dog Star Patrol, but note the Dog Star did appear in the comics in connection to the SCPA). Pretty cool.

While I don't have much experience with the animated series, I did acquire the 6-issue tie-in comics series. We can talk about it next week!
Krypto Superman TV