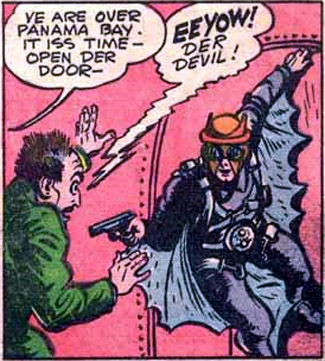 Around this time, probably due to the popularity of masked heroes, aviator ace Hop Harrigan took to wearing a mask and using a winged suit that predicted base jumping equipment and allowed him to soar out of the confines of his plane. "Der Devil" was not a name that stuck, but let the Ratzies believe what they want.

Is there something about aviation heroes that inspires this kind of thing more than other types of adventure heroes? I'm thinking specifically of the much-derided era of the Blackhawks where they were given superhero outfits and gimmicks. I think Hop got a better deal on that score.
Comics Golden Age One Panel