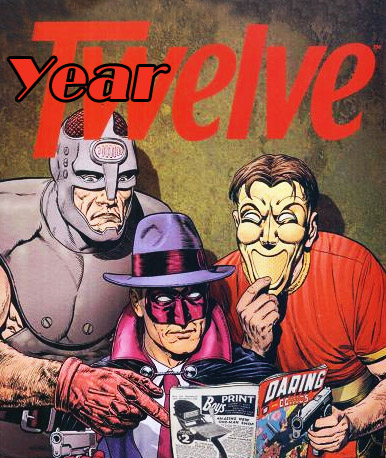 It was twelve years ago today Siskoid's Blog of Geekery was launched, just this space to post reviews and jokes about whatever geek stuff I took an interest in, from comics to sci-fi to movies to role-playing games and more. Here we are, 8282 posts later, and whether you've been around reading them since the beginning or started today, I want to thank you. It isn't a private journal. This stuff is for you.

Year 12 Highlights
Last year, I said of Real World 2017 that it was worse than the terrible 2016, and 2018 took us further down the slippery slope. For me, blogging and podcasting was an island where I could escape to, and hopefully a port in the storm for like-minded folks.
-Star Trek and Doctor Who kept on giving and I kept on reviewing, with Battlestar Galactica getting a weekly spot in the rotation unless there were more pressing concerns.
-In podcastery, my shows on the Fire and Water Network, as well as my partnership with Straight Outta Gallifrey kept going at a steady pace. In 2018, the surprisingly popular First Strike: The Invasion Podcast rolled to its natural end, while FW Team-Up started taking a monthly slot (guests keep showing up at the door, everyone's got a favorite team-up and I'm always booked 6 months in advance as a result!). Look for new podnerships in 2019; there's someone across the Pond I have trouble saying no to (see below).
-Movies are still a major part of my fandom right now, as anyone reading my Sunday capsule reviews will realize. 2018 is the year I embraced TCM and my DVR as classic Hollywood films are/were a bit of a blind spot for me. So much to see, so little time. Also fueling my addiction is Letterboxd, a film tracking site that's practically my home page. My thanks(?) to Michael May for introducing me to it. Can't wait (read: dread) to publish my movie-watching stats...
-After trying (maybe not that hard) to get some kind of RPG set up, I put some thought into a Bard-only D&D game, which led to actual play (as reported in This Week in Geek every few weeks).
-I thought Krypto's Saturday feature wouldn't last a third year, but I was wrong. It's still going and we're only up to about 2005. It won't last a fourth though. Or I may be proven wrong again. Still, starting to think of replacements. You want a slow burn with no end in sight? Just look at One Panel, which presumes to be able to show one panel from every DC comic ever published (so long as I can find one). Been going for a long time now, and we're only in Spring of 1941.
-One feature I DID finish was Dial H for Hero. It's now fully indexed, though I hear DC is set to bring it back, and so shall I.
-The non-feature I started that's gonna last me a couple years is a weekly exploration of the blog's post categories (or "labels"). Catering to both disused labels (what am I gonna say about Babylon 5?!) and popular ones (isn't Comics a bit broad?), it provides variety and shakes the cobwebs loose of potential resurrections. Still in the "A"s so... that's gonna last a while, and hopefully, your favorites will come up sooner than later.

So, what's next?
A lot going on that's already scheduled, so it's hard to say what will come up spontaneously in the new year. As Krypto's weekly spot gets cleared, there may be room for retro-gaming reviews, depending on how much action my C64 Mini gets. The only definite plans I have are on the podcasting front, since those require teamwork and thus more planning. If all goes well, all the current shows are meant to continue, and since he announced it himself on the last episode of Gimme That Star Trek, it's safe to tell you I'll be collaborating with Ryan Blake and a bunch of other fine people on two shows coming out of his UK studios: One an improv comedy show where interdimensional watchers interview fictional characters, and the other Hero Points' answer to Doctor Who role-playing games. It's gonna be fun. Hope you join me on some of this stuff.

Celebrating a 12th Anniversary means we're entering Year 13 tomorrow, so expect everything to fall apart. Start rubbing your rabbits' feet! It starts tomorrow with This Week in Geek, a day delayed because of this post. OH NO! WE'VE BEEN DERAILED ALREADY!!!
Holidays Straight Outta Gallifrey Websites

Anonymous said…
I love this blog and appreciate you doing it every day. I now can discuss with some ability "Dr Who-ese" with my Wholigan friend.

Anonymous said…
I agree with Anonymous, but just want to point out that I got here before the Anonymous. Signed, Anonymous
December 9, 2018 at 12:19 PM