February 28, 2019
I don't know when it happened exactly, but as the 30s gave way to the 40s, I could swear racist Yellow Menace strips started giving way to racist Jungle Adventure stories. Here are four examples from May 1941's Quality Comics. Lion Boy has almost exactly the same origin as Timely's Ka-Zar, but is a little more Tarzan or Mowgli-like (no pesky parent to help him around the jungle). This righteous jungle hero rides lions into action and in this particular comic, avenges the poisoning of a noble zebra. Ok, that's pretty cool. 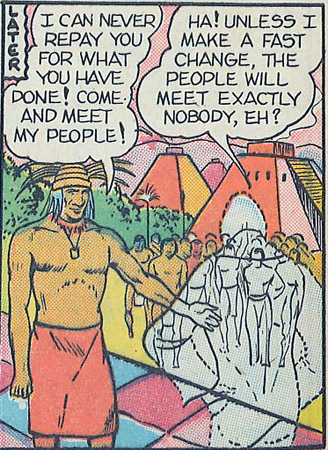 From Invisible Justice: "The Face of Tezcapoca" by Art Pinajian, Smash Comics #24 (July 1941)

The Invisible Justice strip shows that there are more jungles than those in Africa. The vanishing hero finds a tribe of Aztecs in the jungles of Panama and helps them against Fifth Columnists before trolling them thoroughly. 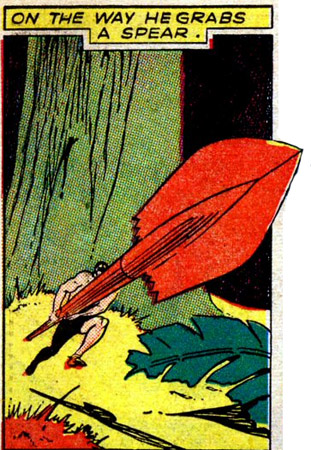 The proof of Jungle Adventure's rise in popularity is however to be found in pure superhero strips. If guys in tights who routinely get into urban punch-ups go to the jungle for MacGuffin reasons, then you know the subgenre has become a fad. Case in point, Doll Man, here shown sticking a native with a spear. I like the perspective and have decided not to show the grotesque racist caricatures that inhabit this tale. 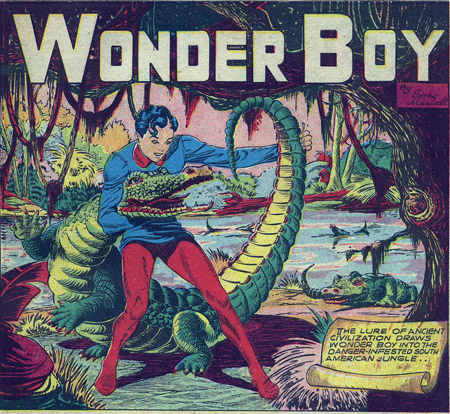 And finally, an equally overt superhero-in-the-jungle story, as Wonder Boy, last survivor of the planet Viro, visits South America and uses the "strength of a thousand men" to beat on crocodiles and natives. He makes friends with the latter, but makes the croc eat its own tail. Al Bryant really knows how to combine my two main complaints about Jungle Adventure comics: Racist colonialism and animal cruelty. Nice art though.
Comics Golden Age One Panel

vgmclassics said…
It’s always interesting looking at stories like this and asking what exactly could have been done different, when media like the Three Stooges, the Marx Brothers, and the Little Rascals and all their comedic exaggerations were popular and leads to the question of when are exaggerations objectively right and when they’re objectively wrong, which I’m sure is still worth asking today since comically caricatured media exists even today like The Simpsons.
March 11, 2021 at 6:44 PM