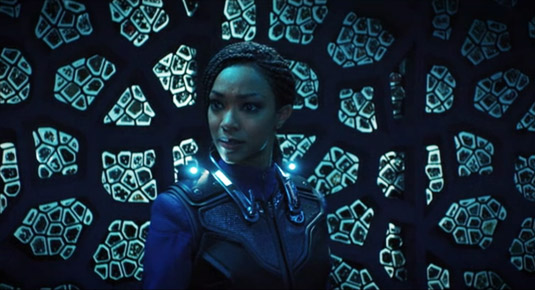 CAPTAIN'S LOG: Discovery must prove its worth to a now-insular Federation.

WHY WE DON'T: They're jerks.

REVIEW: Not gonna lie, when Discovery finds the Federation and everyone's wide-eyed over the crazy-advanced ships in the fleet, I was having alllllll the feels. Star Trek fanfare EARNED, show makers! And it's mostly in reaction shots and dialog, because it's very hard to see much of anything inside the cloaked construct. Our better glimpses include a toothy Voyager-J, and a USS Nog (confirmed by the production as an Eisenberg class - don't make me cry, guys).

That sense that "we're home" is of course short-lived. The Federation is down to 38 member worlds (from its peak of 350) and its fleet correspondingly smaller and strapped for resources. I think the Admiral jumps the gun when he immediately orders the ship retro-fitted, its spore drive reverse-engineered, and its crew to be re-distributed among the fleet. It makes sense in a real-world way, but not in TV way, so of course Discovery's family will have to show that it's better that they stay together. Your mileage may vary on these kinds of "proofs" generally, but they're the impetus for a quick mission and by the end, enough of a reconciliation with Starfleet that they can accept the status quo. And because of the initial mistrust, Saru allows himself to be kept as a guarantee so Burnham can actually captain a mission. A quick word on the Admiral, I thought at first he might have a French-Canadian accent (a first for the franchise, but since the show started filming in Toronto, something we might now expect), but no, the actor's accent is actually Israeli and the character's name, Charles Vance, more Golden Age of Science Fiction than Québécois.

But before I could process my disappointment, a warm WTF-type elation at their casting  of David FREAKING Cronenberg as creepy interrogator Kovich who does a number on Georgiou. If that's what's actually happening. Her distracted look at the end could just be her thinking about her future (perhaps as pertains to the Section 31 series she's meant to helm one day), because she seems largely in control during her debriefing, even going so far as disabling the holograms (with echoing voices, maybe because they're so advanced they could otherwise pass as human) asking her questions with harmonically-sequenced blinking. I guess this is an S31 trick, because holograms weren't in common usage in her time. Georgiou is a character that always seems a bit over-powered, this time, questionably so. Perhaps what does a number on her is learning that the Terran Empire fell centuries ago, though the altruistic Federation endures. Kovich is a fascinating low-key character, and I hope we see more of him. The other debriefings are played for comedy, which is fun.

The mission of the week has the ship race against the clock to find a cure for a disease that has stricken a Kili ship (one of those few members), another instance of the production predicting the current state of the world, inadvertently relevant to COVID-19. The mission turns into Nhan's last stand when it turns out a Barzan family is taking care of a large collection of seeds and plants from across the galaxy, including the sample needed to synthesize a cure. We're told she has insight, and that Barzan attitudes and culture are the key to resolving the issues that come up, but we're not really told. Family is extremely important to them, and it motivates Nhan to stay on the botanical ship and eventually return to Barzan, but I find it odd to keep Nhan around only to dismiss her by the fifth episode. I've come to like her - and her goodbye is emotional - but perhaps the cast was just getting a bit too big. Other Season 3 favorites are at least getting more play - Culber, who is part of the Away Team here, and Adira, who I like giving credit to the whole crew early on. The plot plays out as a ghost story, with a man trapped in-between transporter beams (with very different consequences than what happened to Boimler on Lower Decks earlier this year), and Burnham once again shows how good she is figuring things out and connecting with people. It also showcases Stamets, Tilly and Jett Reno as a dysfunctional science team bouncing off each other and coming up with the [TECH] solutions.

With the very mobile Discovery allowed to stay intact and act as the Federation's eyes and ears outside its contracting territory, it'll be able to explore some of the show's new and outstanding mysteries. The case of Burnham's mom scares me most, because I really don't want her to be the cause of the Burn. I'd rather the Burn be something else entirely, if only so everything doesn't somehow hinge on Michael. The new mystery is a piece of music the Barzan are playing in a recording, which is the same tune Adira had inherited from Gray. Thematically, this would seem to be about the things that connect us, and that Federation members, past and present, share. It's the song of reunification. They stress the point so much that it kind of feels like how All Along the Watchtower was used in Battlestar Galactica, like there's more to it than that. Let's hope the show goes in a different direction with the seeds (ha!) sown here.

LESSON: Exploration is a luxury we should always be able to afford.

REWATCHABILITY - Medium-High: Lots to squee over, but Nhan's departure seems to come out of nowhere.
ST Reviews: DIS Star Trek