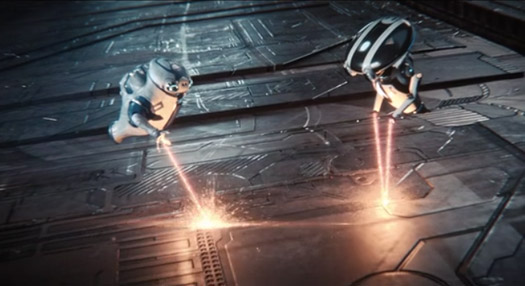 WHY WE LIKE IT: The refit! (But do I mean of Discovery or of Georgiou?)

WHY WE DON'T: Who's the most insubordinate officer in Star Trek history? Mariner, or Burnham?!

REVIEW: I suppose it's pretty exciting to upgrade Discovery with 32nd-Century technology. It probably wouldn't survive against other ships otherwise. Those weird detached nacelles, the programmable effect is now all over the ship, and interfaces become more holographic. Linus has a recurring gag where his personal transporter has him pop up in the wrong spots. And somehow, it's Book's ship that gets the coolest "super tech" moment as it changes direction by splitting apart and reconfiguring the other way.

But that's because Burnham once again goes off-book (ha!) to save her love interest (they'll finally kiss) from a Syndicate work camp, not just for personal reasons, but because he's found a black box that might help Discovery triangulate the source of the Burn. She takes his ship and Georgiou (always up for a rogue mission), and so it goes. All very worthy in terms of the greater arc, but Burnham disobeying orders has become a drinking game, and her superior officers make a good point at the end that they might have made the same call, had she trusted them. As an adventure, the mission is pleasant enough, with lots of action, a strange environment (the Starfleet debris field being scavenged by the baddies), and Georgiou being quite entertaining "playing" the part of a hardass scavenger who throws her weight around and dominates every room. Otherwise, it's a little routine. A prison break, a helpful Andorian looking for redemption, ticking clocks, a lot of running and Stormtrooper-level shooting. The climax is cool, with guys getting vaporized by ship weapons and a big wrecks crashing into the liberated facility, but that's all eye candy rather than interesting plotting.

I don't know where they're going with it, but Georgiou has gone from distracted (after whatever David Cronenberg did to her) to having crippling flashbacks à la Batman at various points. Is it the Secret Origin of Mirror Georgiou? Is it what will allow the franchise to access her good/heroic side? The quick flashes we get include the seeming death of a person named "San". Already, we have a softening of the character in her teasing Michael about her relationship to Book, but they're going to push her hard so she can be a viable series leader in the future.

Meanwhile, Discovery is on stand-by as an emergency responder because of its jump ability. We get captain briefings where they throw a lot of new words around to give us a sense that the Trek universe isn't just the same old people (though the Bajorans are said to run one Syndicate Exchange). To Linus' comic bits, add Tilly dealing with Grudge (you're telling me Tilly is NOT a cat person?!), and cast members getting brief scenes where they react to the new tech. Easily the best part of Stamets' growing friendship with Adira, even accepting her visions of Gray as given, since he had similar experiences with Hugh when HE was dead. Stamets was hard to swallow when he was introduced, but he's grown into a favorite. I love him, and Hugh, and Adira, so the dynamics growing between these particular crew members are appreciated. The ship is on stand-by to intervene in a thing, but then it's called off... that whole aspect seemed a simple plot convenience.  When Burnham returns, she gets demoted to Science Officer (which she touchingly thinks is absolutely correct), so... who will be the next XO? Make your bets.

LESSON: It's not easy being blue.

Allen W. Wright said…
I'd place my bet on Tilly for later, but probably a 32nd century native like Willa for the short term to cause trouble.
November 25, 2020 at 11:04 AM

Siskoid said…
Tilly would REALLY be jumping over a lot of officers, but she's eminently promotable over the next few years. I also thought of Willa, but there's a shot in the trailer for the next episode of the crew warmly applauding. If it's THAT moment, Willa would not get that reaction. Who's NOT in the crowd scene? Lt. Rhys, normally Tactical Officer. Could he be the anointed one?
November 25, 2020 at 11:17 AM