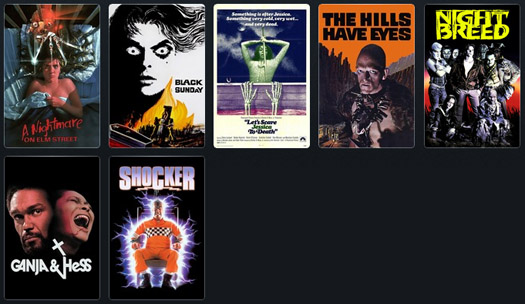 I got a copy of Outside In Trusts No One, a book of wonky essays on The X-Files and Kolchak; I have a piece very early in the book.

In theaters: It's highly possibly that everything I think I know about dreaming, I learned from A Nightmare on Elm Street. Getting to see it in a theater, with teenage pukes making a ruckus in the back (the real horror), I was able to confirm that its dream science was actually pretty weak. But Wes Craven's first, and least comedic, entry in the franchise is immediately iconic, with shocking kills and bizarre imagery, and from the get-go, an original mythology that carried its fear demon into the sequels. The synth score is a little dated, but they mix in terror sounds like Freddy's knife scrapes so it works. When I was a kid, it was usual to debate the individual merits of Jason and Freddy (this culminated in someone actually making a Versus movie), and I always came out defending the latter, and I can see why. Nightmare is a lot more clever, not just because of its unique kills, but because Craven has found a way to make that "you idiots, don't go there!" trope work because characters are following dream logic. In a dream, you WOULD follow that whispering voice, and if you didn't, the next doorway would take you there anyway. Bonus points for introducing then killing Johnny Depp. Bonus bonus points for having John Saxon working with a comically useless police force, just like he did in Black Christmas (an homage, surely!). And lesson learned, folks. Drinking loads of coffee and watching scary movies before going to bed WILL cause nightmares. Nancy should have seen it coming.

At home: Officially Mario Bava's first film, Black Sunday (AKA The Mask of Satan) looks like a Universal Monster film, but wow, is it ever shockingly gruesome for 1960! A loose adaptation of Gogol's Viy, the film has the virtue of being steeped in Ukrainian folklore (or possibly, faux-lore), which means old horror buffs won't know all the tropes by heart. The demon-witch at the center of the story has things in common with several Old World monsters (including vampires), but is her own thing. Bava is a few years away from what is considered the first Giallo film, but this is Giallo before Giallo, trading strange colors with wonderfully Gothic black and white cinematography, but also pulling no punches with visceral body horror - those Italian directors sure like to make you squirm, don't they? I do think the ending is a bit pat, and of course, the English dubbing on Italian movies of this era is always an annoyance to me, but visually, Black Sunday is as strong or stronger than the most highly regarded Universal Monster films it is emulating.

Let's Scare Jessica to Death is a title that implies some collusion, but it may only be on the part of the film makers. It's an odd title that may lead you astray as you try to decipher just what's happening, or is perhaps the ultimate (but unconfirmed, and too convoluted) key to unlock the film's mysteries. Without going into that third explanation, the film is about Jessica (Zohra Lampert) coming to a farm with her husband and friend to live a simpler life after 6 months in a sanitarium. And so, are the horror elements really happening, or is it all in her mind? The film keeps the ambiguity up for a long time, even after you think you've figured it out, because its point of view is unreliable. Extreme close-ups on Lampert's face and whispers on the soundtrack keep us in her head, and wow, what a performance. Incredibly naturalistic and engaging. Never felt like I was watching an actress. Let's Scare Jessica works as a drama about a woman losing her grip on reality just when she thought she was getting better, and it works as a mystery, a thriller, or Southern Gothic, and a horror film, depending on how you interpret what you're seeing.

There are two keys to understanding what Wes Craven wanted to express in The Hills Have Eyes. Within the movie itself, a scene where an eerie sound is shown to be the simple result of wind going through a water speaks to the mundanity of the "monsters" in this story. Behind the scenes, Craven based the film's script on the legend of cannibal Sawney Bean, which he viewed as illustrating how supposedly civilized people could become savage. So when a family gets lost in the desert and attacked by mutant hicks from the hills, they themselves eventually turn savage to defend themselves. This is why the the bad guys are killed in horror movie fashion, with sadistic traps and bloody knife blows, while the initial attack is more likely to feature guns and people coordinating on C.B. radios. So I get it, it's about turning the victims into the monsters, but it still left me a little cold. While there's some nice visceral film making when we are essentially in the caravan family's heads, any scene where we are instead in the hill people's only make them seem silly and over the top, defusing any tension the film actually has. It doesn't quite work as a horror film for me.

Clive Barker's Nightbreed of course benefits from the writer-director's considerable imagination, but things fall apart in the last act, sadly. First things first. Setting the story in Calgary and rural Alberta is an unusual and appreciated move, and casting David Cronenberg in the not-inconsiderable role of the creepy psychiatrist treating the protagonist is perhaps a stroke of genius. The twist, I suppose, is that the community of freaky monsters living under an abandoned cemetery are really not as monstrous as the humans in the story, and without them, Nightbreed is more dark urban fantasy than horror. My first impression of Craig Sheffer was in fact that he looked a lot like David Boreanaz, and between what happens to him supernatural-wise and the underground city of demons, big Angel vibes came off this thing. So that third act... The movie just devolves into the kind of shoot-em-up action movie climax that was already on its way out in 1990, with an over-the-top small-town police chief chewing up the scenery, and ultimately, a sequel-aspiring ending that leaves one a little dissatisfied. Suddenly, it feels like a TV pilot that was never picked up. I watched the Director's Cut which does have one LESS late-game villain intro, but the effect is the same.

Vampires and blaxploitation through an art house filter, Ganja & Hess is a strange and often difficult watch because on a technical level, it has several problems. Sound is often terrible, the narrative is sometimes disjointed, and there are definite longueurs that make you wonder if they're trying to reproduce an immortal's boredom. It does create the sense that we're watching a documentary though, with real unscripted conversations, and the natural (if maddening on screen) pace of life. And the film has several other things going for it, like interesting composition, an unusual take on vampirism, and Marlene Clark's memorable performance as a woman who is forced into a certain kind of life only to be abandoned to it. The subtext is really everything. This is a film about the black experience, with African culture (Hess' vampirism comes from having been stabbed by an ancient tribal knife) being converted and destroyed by Christianity (which has its own blood rituals, such is white hypocrisy). That this happens WILLINGLY speaks to the dangers of assimilation, and in Ganja, we have a further development - once assimilated into the melting pot, you get nothing for your sacrifice. Interesting ideas to ponder, and the film's poetics rescue it from its languid pace and technical issues. But I'd be in no hurry to revisit it.

When I saw Shocker back in the day, I had no way of recognizing Mitch "Skinner" Pileggi from The X-Files (it was 3-4 years away), but what a hoot to do so on rewatch decades later! And he does such a good job as a demented serial killer that I actively resent the movie going into supernatural territory and turning him into an electric ghost that, like Fallen (NINE years away) jumps into various other actors and loses all the visceral energy of his horror killing by using guns and electro-blasts. It's quite obvious that Wes Craven is trying to - all together now - capture lightning in a bottle and remixing elements from A Nightmare on Elm Street - vivid dreams that connect to the mass murderer, sins of the parent, and a super-powered revenant - but in terms of mythology, it's all over the place, and the crazy climax is nonsense that doesn't follow any rules, not even those internal to the flick. I respect the ballsy insanity, but I kind of unplugged from the story once Pileggi zapped himself out of it.
Geekly roundup