"My dream is to tear up your dream." 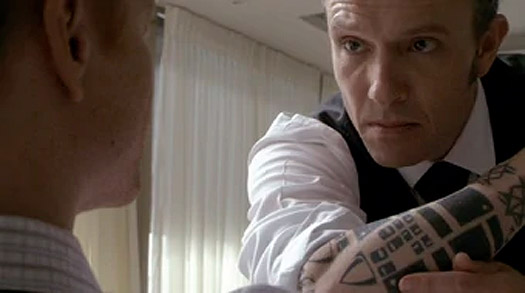 SO SAY WE ALL: Vergis comes after Graystone for stealing his chip. Clarice infiltrates Daniel's lab. Zoe goes on a date with Philomon.

REVIEW: The terms of timing, the introduction of Vergis at this point is rather well done. The Adama plot has sufficiently taught us about "blood for blood" and his reaction to Graystone's theft of his technology is in proper context. We're not too sure what his game is, trying to buy the Caprica City Buccaneers, etc., but the final revelation that it's part of a focused effort to make Daniel pay for the deaths of two men Vergis considers family - more than the theft itself - is sufficiently chilling. If the Buccs are important to him, then he'll force him to give them up (because money's tight, because he feels guilty), then go after the next thing he loves and the next and the next, until Graystone Industries has been destroyed. Yeah, sure, fine, but we should also be scared for Amanda at this point. Either way, Vergis makes for a fine, surprisingly righteous villain.

Every other plot line is sort of at a standstill, comparatively. Clarice gets Amanda drunk so she can copy Zoe's apotheosis program from Daniel's lab, but hasn't it been destroyed? Good scenes with the STO's chief seductress, but unless Graystone was mistaken (or lying) about the program, it shouldn't get anyone anywhere. I guess the whole apotheosis prophecy is better defined by this point, an attempt to create a tangible (so to speak) after-life where one's soul continues (or is even duplicated) through a virtual avatar. Lacy gets a meeting with Barnabas (James Marsters!), the Jansenist terrorist behind the bombings and none too trusting of her holy quest, but he's gonna need more convincing. And Joseph is still looking for Heracles (we don't see him or Tamara at all).

So after Graystone, Zoe perhaps has the most to do, and it's not a subplot I'm particularly enamored with. Her crush on the incel creep Philomon ramps up as she sends him a dating app invite to meet her at V-Club, where she has to spin a yarn about using a Zoe avatar to push away the pervs who don't fancy the girl wearing the terrorist's face, and not having enough money to change it. At least they don't try to sell her glasses as a magic secret identity device (after using the old trope where the secret download device notably flashes and beeps, anything's possible). There's not much more to it than that.

CAPRICANADA: The holobands' virtual tour is shot at the Aerospace Technology Campus where Graystone's giant board room and Graystone and Cyrus's walk-and-talk. Vergis Corp on Tauron is Central City in Surrey BC, a kind of campus/shopping mall combo, part of Simon Fraser University (not to be confused with the Flash's Central City, which is played by Vancouver, but you can see this Central City on that show as Stagg Industries). The Graystones's shindig is held at UBC's Museum of Anthropology. Vancouver's Teryl Rothery (Evelyn) is a recognizable face from many Canadian-based productions, including her turn as Jean Loring in Arrow, and recurring roles in Travelers and before Caprica, in Stargate SG-1.

ALL THIS HAS HAPPENED BEFORE AND IT WILL HAPPEN AGAIN: When we're scanning channels, there's a mention of the Book of the Word, what the original series called the Sacred Scrolls. Tauron, as seen here, uses the matte painting that was Libran in The Plan (oops?). Is there a connection between apotheosis and Cylon resurrection as created by the Final Five, or alternatively, the duplication of "souls" in the other seven models? In The Plan, just before the attack on the Colonies, the Hybrid says "Apotheosis was the beginning before the beginning".

VERSIONS: Deleted scenes include Duram unpacks a machine that can match a mugshot to all their info on the web (or "mesh") and testing it on colleagues; and Amanda begging Daniel to see the Zoe avatar, but he doesn't tell her it's gone, only that it wasn't really her (as Zoe watches and touches her mother... as the robot, with no reaction from anyone).

REWATCHABILITY: Medium - Bit of a place holder. The Graystone stuff is strong, but every other plot line gets short shrift.
Battlestar Galactica