One Panel #543: Everybody Needs a Manhunter 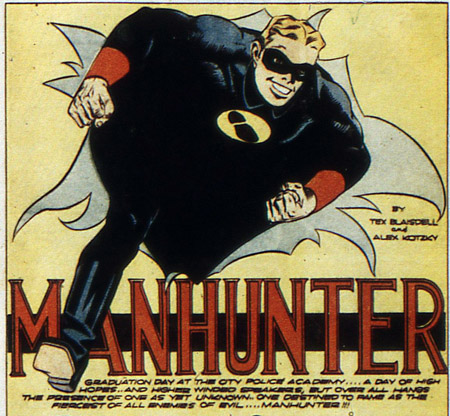 From Manhunter: "The Origin of Manhunter" by Tex Blaisdell and Alex Kotzky, Police Comics #8 (March 1942)

DC (National) already had a Manhunter, but the strip was called Paul Kirk, Manhunter, which didn't quite cement the trademark. A year late, Quality comes out with Dan Richards, Manhunter, and leaves his real name out of the title. With his dog Thor and a footprint on his chest(???), this beat cop fights crime on his off hours and has a claim to being the first MASKED HERO named Manhunter. Paul Kirk gets a mask and costume only NEXT MONTH. Hm. I wish I knew what was happening in the comics community behind closed doors on that one!
Comics Golden Age One Panel