Being a look back at cards from the Star Trek CCG, and what I thought of them back when they were fresh and new... in EPISODE order. We just saw Balok, and he needs a ship to fly.. 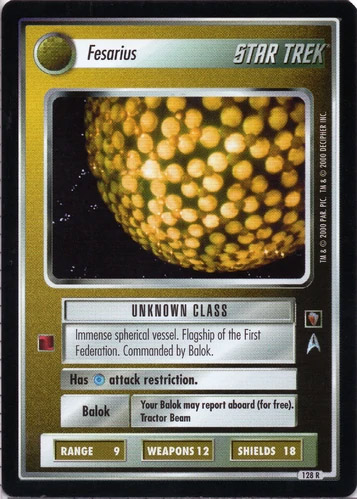 PICTURE: Without another ship in the frame (the Enterprise was digitally removed from the shot), you can't really tell a ship's proportions, but placing a lot of it out-of-frame really helps make the ship look big. Sure, the effects are silly, but not overly so. A good and scary 3.6.

LORE: Short, telegraphic lore. There's a brief physical description, and mention of the mysterious First Federation (not to be confused with the affiliation), plus a matching commander that has to be aboard anyway to staff it. Okay, though not very exciting. "Unknown Class" is even more boring. A 3.

TREK SENSE: Balok's ship was only, so far as we knew, staffed by him, so his presence in that box is quite natural. You don't get the Fesarius without Balok. The free report to the ship works in a similar vein. He did seem to live aboard. The ship has a Tractor Beam that could hold the Starship Enterprise easily, and besides is certainly big enough to take in shuttles. It should even be able to carry entire starships! The attack restrictions are interesting. Balok's bark was certainly worse than his bite, so though he threatened the Enterprise, it was just a test. The First Federation turned out to be a friendly entity, much like the affiliation of the same name. Range is fast for the 23rd century, which works. It's such a huge ship, the Weapons and Shields should be high to match, and they are. The Weapons aren't THAT high, but the 1st Feds are supposed to basically be friendly (plus, Weapons 12 is huge in the 23rd century). It's close to indestructible in that era too. A good simulation worth 4.1.

STOCKABILITY: Wow, big Non-Aligned ship, much better than the Husnock Ship, but wait, you can't attack with it at your leisure. It's got Federation attack restrictions. Well, that still leaves Borg, but Borg have pretty high SHIELDS themselves. Tell you what: Put Captain Kirk aboard, and you can pretty much attack anyone. Now that we have that solved, there's the matter of staffing. Balok is the only personnel that can staff the ship. On the one hand, that means it can't really be commandeered, but on the other, it makes it impossible for you to use any other personnel to staff it. Decipher helps by making Balok reportable directly to the ship for free. Can't wait? Ready Room Door can download him directly there. And as long as you're obligatorily using a matching commander aboard his own ship, you might as well have Captain's Log and Dedication Plaque on the table. 11-15-21 attributes is even better than what's there now. Whether you use it to attack or not, those SHIELDS will provide protection against most any ship. Even a Borg Cube can't score a direct hit on this ship (not without a Kurlan Naiskos anyway). And WHAT Stellar Flare? ;-) A real sanctuary, and the vessel you want to hunt down the Borg Ship dilemma with. A good 3.8.