I Wouldn't Play D&D with the Legion

Category: Legion
Last article published: 27 February 2021
This is the 124th post under this label 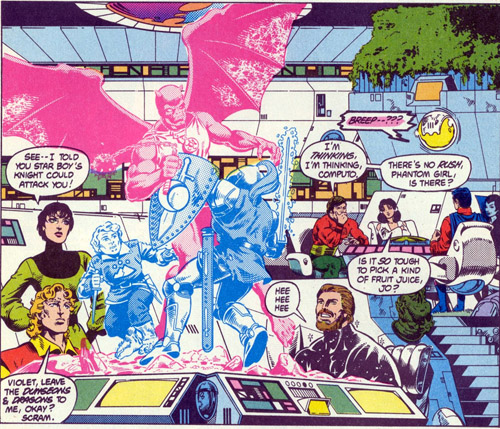 I won't deny it was fun to see Sun Boy and Star Boy (are they paired because they essentially have the same name?) playing Dungeons & Dragons whenever they had some downtime in the '80s Legion books. However, I just can't get into the way the role-playing game hobby morphed between then and the 29th Century. You might think it's cool that there's an impressive holographic display, but it's got more in common with the chess set aboard the Millennium Falcon than it does table top role-playing. My complaints:

1. Well, it's D&D. Obviously, it's the game with the biggest market penetration and pop culture resonance. I guess it COULD survive, as a brand, to the far future. But if I'm both friends with Legionnaires and still myself, that's probably the game I want to play the least. Tired, not wired.

2. They play it like a wargame. Anytime we see a D&D session, they're always fighting one another with different avatars. There's no concept of a GameMaster (my prefered position), so you might imagine the computer is playing that role. Ok, sure. But why aren't the players cooperating "against" its scenario? Even from session to session, they may not be playing the same avatars, so it's really just a video game at this point.

3. The size of the party. As I've said, it's NOT a party because they're competitors, not collaborators. But then, even though other Legionnaires (like Violet here) hang around and comment, no one else ever plays. In a team that numbers 30+! The console is at least made for four, so I have to assume Dirk and Thom are not very fun to play with. In fact, Dirk sends Violet packing here (girls ruin everything). So now I'm thinking these two have a game based on all the toxic nerd clichés. Where's the Mountain Dew?! 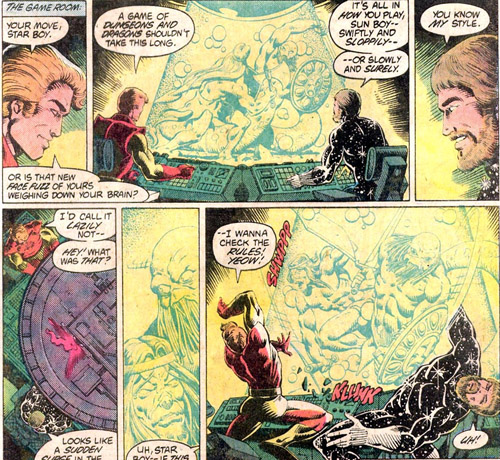 Yeah, ok, no. If your "miniatures" can attack you, I really *am* out. I'll be in the other room running GURPS for Lightning Lass, Shrinking Violet, Bouncing Boy and Polar Boy.