Learning to Fly - Position 11: The Cannonball

Category: Learning to Fly
Last article published: 7 November 2011
This is the 11th post under this label

Being a series of vignettes aimed at educating the super-powered reader about the various possible permutations of the flight posture. 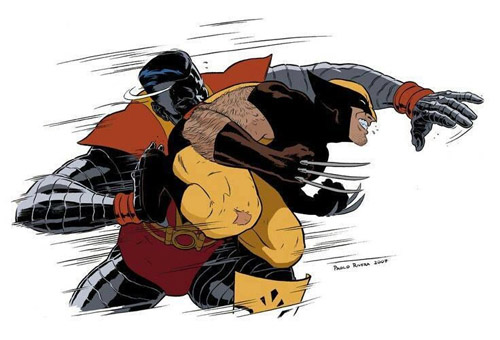 The question may be: If you've been thrown, are you actually FLYING? Well, some heroes fly using jet packs or artificial wings, so ASSISTED flight is definitely covered in the brochure. Who's to say Colossus's mighty arm DOESN'T count as a method of assisted flight? I'm not gonna tell him otherwise. Are you?

But in terms of positions, while Wolverine (in the most famous example) often starts as a "cannonball", he usually distends pretty quickly, claws out to make sure he's in the most offensive of postures by the time he hits the enemy. But for long distances, it may be better to tuck in, especially if you're a dense little guy. While normal anti-grav flight has a speed controlled by one's will, the cannonball runner has to apply skill and physics to the problem. When is it better to straighten out so you show the small profile? To distend and let friction slow your speed? You get a lot of options, but you need to practice.

If you can't fly under your own power, though, getting catapulted may be your only recourse...
Comics Learning to Fly X-Men