What a Card: Lt. Bailey

Being a look back at cards from the Star Trek CCG, and what I thought of them back when they were fresh and new... in EPISODE order. The Corbomite Maneuver keeps on giving... 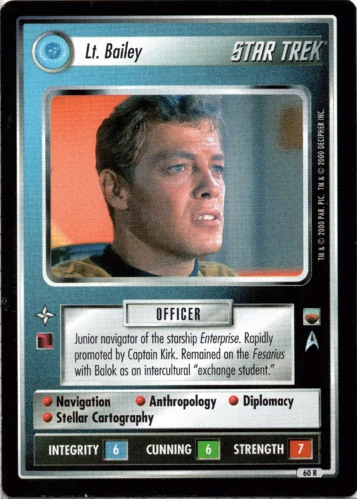 PICTURE: Bailey had to look scared or else it wouldn't be his card. Well, he's more like worried, but I think the close-up still delivers. Pastels in the background are all over the place, but not disturbingly so. A 3.5.

LORE: Some good stuff. We get the usual, such as his post, but also that he was (too) quickly promoted to the bridge by Kirk. And of course, there's his final fate. I don't much care for the words in quotation marks, but it was from the show, so. A better than average 3.3.

TREK SENSE: Too bad that last line didn't inspire a special skill, but I think the standard skills are fine. As a navigator, Navigation is of course a must, but so is Stellar Cartography, especially with the old TOS-style helm station that separated the pilot and navigator positions. And then you have the other half of his character, the one that spends time on the Fesarius. In that role, he needs Anthropology and Diplomacy. What is painfully missing though is Youth - he was quite naive and inexperienced and WAS promoted very quickly. So don't let the Lieutenant rank fool you. His panic under pressure has dropped his Integrity some, and shows a less than stellar Cunning. Strength should probably be at that level too, since in battle, he would have been just as panicky. The basic framework is fine, but some things are missing, others, inexact. A 2.9.

STOCKABILITY: OFFICERs are good but not excellent in an OS deck because OS Equipment doesn't do much with them. The OS Phaser does add SECURITY, so there's that at least. From his skill box proper, we can make out some good skills. Diplomacy and Navigation are relatively common, Stellar Cartography too, but they see plenty of use (he's a Study Badlands kind of guy). Anthropology is less frequently seen, but no less important, especially with Voyager-era dilemmas (and there's always The Guardian of Forever's card draws). In a strict OS deck, all his skills occur pretty much with the same frequency - about 3-4 times, with 1 or 2 extra from Mirror personnel. So in a balanced OS deck, Bailey will probably make an appearance. Attributes are lukewarm, but the mix of science and officer skills is pretty good. A 3.5.