Who's This? Charlton's answer to Spider-Man. 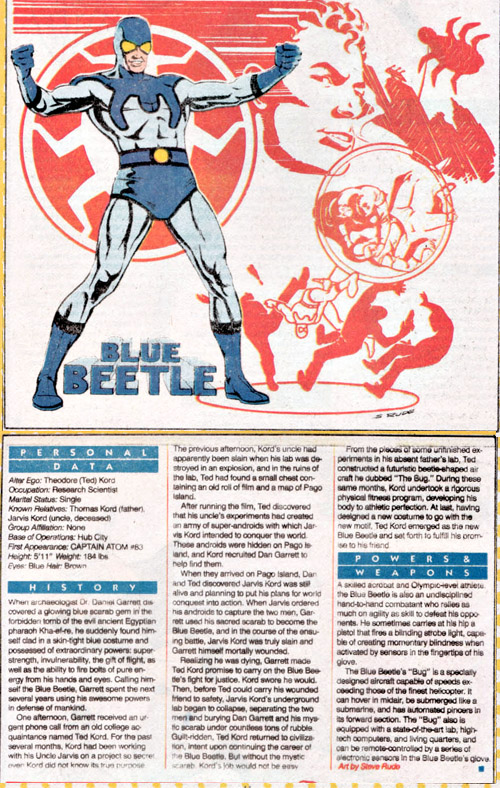 The facts: The name dates back to 1939, Ted Kord is a complete reimagining of the IP (with ties to the original), designed by Steve Ditko for Charlton Comics in 1967, best expressed as "Spider-Man with an unlimited budget". After four back-up stories in Captain Atom (#83-86), he landed his own series, running 5 issues. Americomics then used the characters a bit in the early 80s, after which DC bought them lock, stock and barrel. After the Crisis merged "Earth-4" into main continuity, he led a solo series for 24 issues, apparently not helped along by his star-making membership in the Bwa-ha-ha Justice League. Blue Beetle became a bit of a joke in this era, but remained a fan favorite, as evidenced by fans' continued ire over his repugnant murder in Countdown to Infinite Crisis.
How you could have heard of him: His death didn't stick, and he returned in various stories in the 2000s and 2010s (Booster Gold, Justice League 3000) and is finally back for good post-Rebirth, even if another Blue Beetle made a splash (and is even headed for the big screen) while he was dead. Two famous characters are really Ted Kord, but someone told a creative team they couldn't use him. One is the Atom in Arrow/Legends of Tomorrow, and the other is Nite Owl in Watchmen.
Example story: Blue Beetle (vol.5) #1 (June 1967) "Blue Beetle Bugs the Squids" by Steve Ditko and D.C. Glanzman 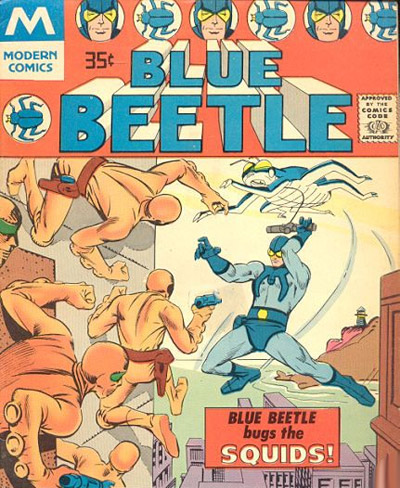 Before Ted Kord was even a DC character, I came to him thanks to a handful of Modern Comics reprints of Charlton hero comics I found in a flea market. These included his first appearance in Captain Atom #83 and his first issue (with bonus first appearance of the Question). So I have a lot of love for these comics, but this is the Beetle they're talking about here; he hasn't been integrated into the DCU yet. Let me show you the splash page, because it'll save a lot of time. This happens a LOT in this issue: 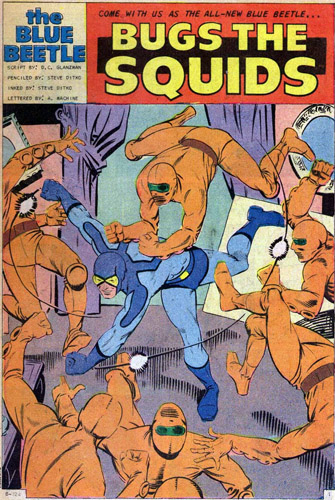 Blue Beetle's signature style is, quite accidentally I'm sure, akin to Muay Thai, with flips driving hard kicks into opponents. Ditko makes Ted a whirl of limbs that all find their target, so he's perfect for fighting large groups, and consequently, it happens regularly (the Squid Gang is followed by the Madmen in issue 3, for example). The image also showcases the Squid costume's sucker arms, which I'm sure would work great if the hero weren't so acrobatic. But my favorite part is actually in the credits, specifically how Charlton comics back then were lettered by A. Machine.

Our story begins in Hub City, on the waterfront, as these sticky criminals climb up to a building's penthouse and are almost immediately jumped by the Blue Beetle. It's basically the splash, and having a guy act as a back brace is something he considers an assist. He's got them on the run, and following them out the window requires he call the Bug. Quite the utility vehicle! 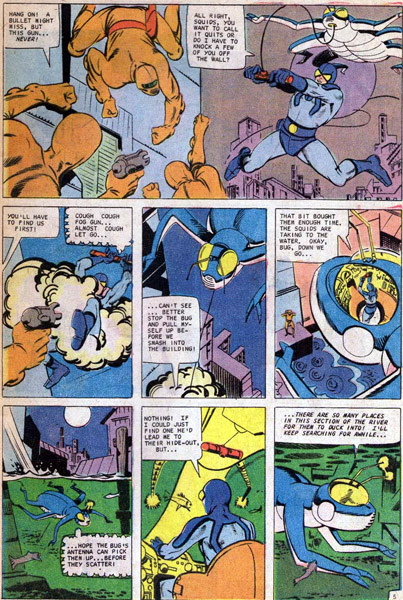 I'll admit I like the rounder version that showed up in the DCU, but it's still one of the coolest vehicles in comics history. So okay, he's lost the Squid Gang and they're already planning their next caper. So let's look at Ted's civilian life we wait for them to make their move. First, he's being hounded by a police detective about what happened to Dan Garret (the original Blue Beetle) on Pago Island. So that's interesting. Second, his lab assistant is also his long-suffering girlfriend.

Not exactly a model for feminism, our Tracey. But a lot of angst. MARVELous heaps of it. Soon after, the Squids hit a charity luncheon held on a yacht, and Ted is on to them. Seems obvious. He follows in a submersed Bug. But he's looking for the Gang to swim over to the boat, and not expecting them to be clever and already aboard! 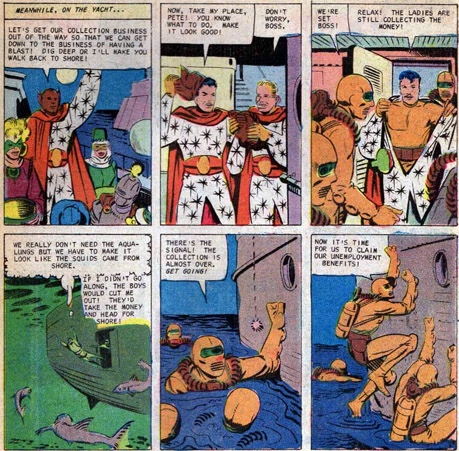 Still, the Bug's antennae pick up the sounds of a robbery, but no Squids swim out. The leader of the Gang is "Todd" and it's his boat, so they just stayed aboard. The donors are all brought back to shore. The cops think they'll never see the loot again. And the Toddster takes the yacht out again. That's when Beetle boards it to investigate, and at the fight sign of a Squiddie, he know who the boss is. I can't help it, I gotta show more action! 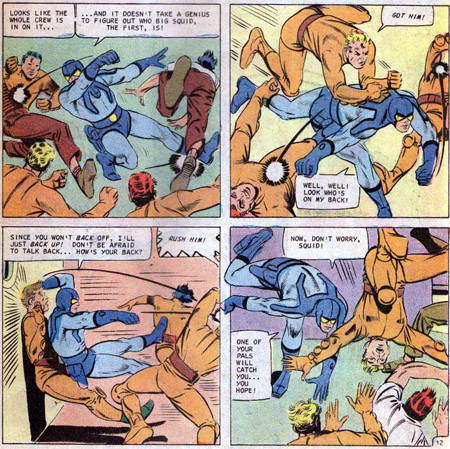 The Big Squid orders his men to shoot the Beetle, with GUNS like, and that's when Ted uses his Call-a-Friend option, i.e. the Bug. BB escapes, submerges, comes around the boat, resurfaces, and grabs the yacht! 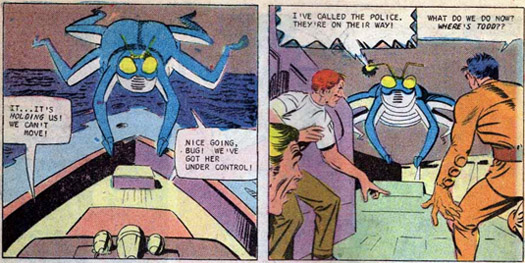 But the Big Squid doesn't want to get caught, so he jumps out and swims to shore, leaving dynamite aboard to take care of the "evidence". Not his day: It fails to go off and Blue Beetle is quickly after him. And after a couple more pages of fighting...

I remain a big fan of Blue Beetle's short Charlton era, and while the DC series had its charms (under Paris Cullins's pencil, certainly) and even re-imagined some of the same stories (Pago Island, the Madmen), I wish it had FELT more like this, i.e. more solid action and fewer ongoing subplots. It may or may not have helped, I don't know.

Who's Next? A weirdness magnet
Charlton Comics Who's This?