"One of the best pilot candidates I have ever seen... and unfortunately he knows it." 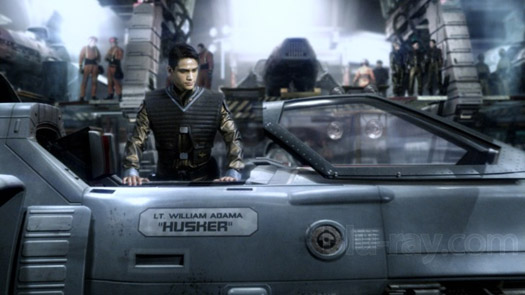 SO SAY WE ALL: Bill Adama's first mission during the Cylon War.

REVIEW: If Caprica would have kept jumping through time, Blood and Chrome might actually have been a part of it. As is, it's an attempt at perhaps "fixing" what made Caprica less popular than BSG by focusing on action, and there's certainly a thrill from seeing Galactica and the fleet in their heyday. It's really Space: Above and Beyond with bonus lens flares, the better to hide the irreality of the virtual sets used throughout, and it's young Bill Adama's story from back when he was Starbuck, essentially.

From Caprica, we know his father was a lawyer for the Ha'la'tha and they give him grief for it. From BSG, we know he's to become a legendary Viper pilot with the call sign "Husker", but we're going to make him work for it. But it'll only take this one movie for him to get all the elements into play, which would have gotten the predictable stuff out of the way. Or maybe not. Even what's new has a lot of predictability to it, at least, if you've ever seen a war movie. It's actually a wonder that the panicking coward just a couple months from the end of his tour, Coker, survives at all, to the point where it seems like an afterthought. The late bonding between the two, the whole bit with the picture of Coker's wife... it really felt like he was scripted to die and they then decided to keep him around in case SyFy ordered a series. Kirby the Viper pilot though... he was dead the minute he was told he had a son.

Much of the story centers on Dr. Becca Kelly, a mission specialist who feeds her Raptor crew as few details as possible and acts as femme fatale. The idea is to show that Bill is still very green despite his piloting skills, and Kelly turns out to be a Cylon sympathizer and traitor. The twist at the end is that the Admiralty knew all about her motivations and fed her false data, so while the mission looks like a failure, it's actually a success, and by turning the tables on her, Bill and Coker almost blew everything. She makes sense in the context of Caprica too. From what we saw of the Cylon rights movement, there would be people who saw the war as unjust. Plus, she worked at Graystone, built Cylons, may have a measure of guilt on top of that sympathy. This is still a world that remembers Cylons in a variety of shapes, and the film gives us a new, creepy bug-faced soldier to look at. Oh, and a Six before they were skin jobs! So it looks like they were cyborgs before they got to full "human", and there's also a "Cython" in the story to hint at it (though the snake doesn't really look cybernetic, so I don't think it really works).

Because it was designed as a matinée cliffhanger series, Blood and Chrome is practically wall-to-wall action, with plenty of special effects (and they even cut an entire sequence out!). We get a Raptor having to act like a Viper, a fight inside the hulk of a Battlestar, the Osiris's suicide run on a base star, a Cylon siege on an ice planet, and more. It's pretty relentless, though I always felt like the characters got their due.

But between the lack of actual sets and the casting of tons of alumni from BSG and Caprica (some quite noticeable, especially if you've been watching Caprica, like Brian Markinson - Duram - as Commander Nash), there's the sense that this is a vanity project made between friends, almost a fan film. It's fun, but I'm not necessarily disappointed that it didn't lead to more.

ALL THIS HAS HAPPENED BEFORE AND IT WILL HAPPEN AGAIN: Most of the actors in B&C appeared in BSG, Caprica, or both. Ben Cotton (Coker) was first seen in Razor as the scared man on the ice planet, which has some resonance here. Any time there's a secret mission on an ice planet, our thoughts go back to the original series and The Gun on Ice Planet Zero, and speaking of '70s Galactica, we see plenty of TOS raiders, but for the first time, a classic Base Star (or close enough). Adama has a thing for drunkards (Coker/Tigh). The words "There must be a way out of here" (you decide if it's a "joker to the thief" situation). The events of this "recon mission" are referenced in the episode Sina Que Non.

VERSIONS: Though it plays as a 90-minute movie on DVD, it was originally made available as a 10-part web series, then shown in film-form on SyFy. Deleted scenes (with missing effects) include marines pumping themselves up by watching Cylons getting blown up, a bonus Adama raptor mission having to destroy Cylon batteries (with maverick action that drives Coker crazy), their CAP dressing them down for not getting along, Coker explaining what a "husker" is (a hayseed), Commander Nash asking Adama about his hot-dogging on the mission, a conversation about Coker's background, the team approaching the ice cave and taking a swig of booze, and more of the Cylons storming the ski lodge.