Category: Man-Thing
Last article published: 10 April 2010
This is the 4th post under this label

Going back to the old story of how Swamp Thing and Man-Thing essentially came out at the same time and were at least in part the brain-children of comics writers who were room mates at the time - Len Wein and Gerry Conway respectively - we have to acknowledge a number of things. One is that Roy Thomas was also a part of the Man-Thing's genesis, and that he had been wanting to bring back the Heap, a similar monster (root fate and all) from the Golden Age (because Roy Thomas). That certainly muddles the story we might want to tell about Gerry and Len lighting up a doobie and coming up with a plant monster concept together, then promptly forgetting about they had done so and believing the idea to each be their own. Was Gerry, in fact asked to script a story by Roy and talked about it on some late, drunken evening (with similar results)? Thirdly, while both monsters appeared in anthologies, Man-Thing (in Savage Tales #1) seems born whole, while Swamp Thing (in House of Secrets #92) needs a slight reboot before appearing in again; he was more obviously portrayed as a one-off. So while Swampy has had more success, especially beyond the 1970s, Man-Thing has a better claim to being the original (give or take the Heap) given publication date, creator credits, and clarity of initial concept.

That said, I did not expect the first Man-Thing strip to be so GORGEOUS. 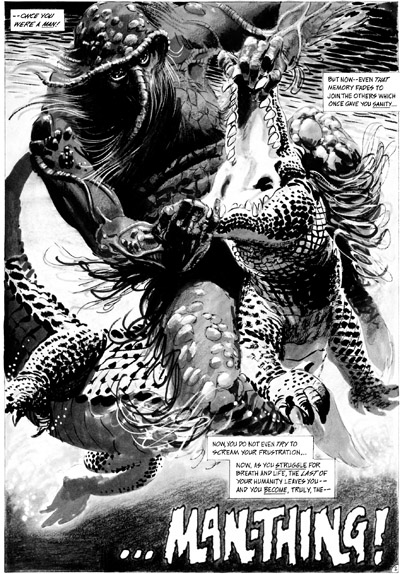 Swamp Thing's first story is not to spit on, it's Berni Wrightson for crying out loud, but Gray Morrow in a big black and white magazine?! LOOK at this thing. Both monsters have a lot of artistic cred! Told in the dreaded second person singular of many 70s horror stories (I say dreaded, but it works here), Ted Sallis has been a muck monster for long enough to start forgetting he was ever human at all. That will become a big point of discrepancy between DC and Marvel's models. Is it more tragic for Alec Holland to remember himself as a man, or for Ted to have lost it? It does need that discrepancy because otherwise, it's about a scientist working in the swamp with his lady, being chased by bad guys, and doused/injected with chemicals, becoming one with the swamp. Loose doobies sink ships, boys! Of course, Ted's sexy girlfriend isn't an equal partner like Linda Holland - she's working with the bad guys to sell Ted's super-soldier formula to the highest bidder. 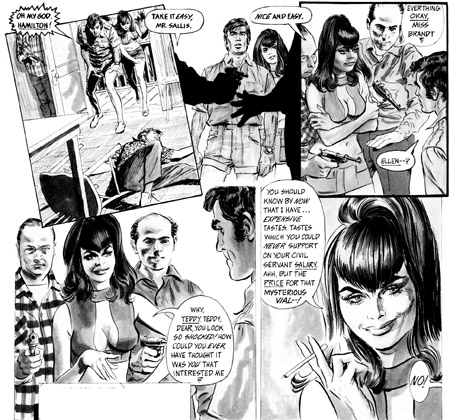 In Marvel's version of the story, Ted doesn't get set on fire, but instead injects himself with the serum to keep it out of enemy hands. But the waters of the swamp interact with the unstable solution and twists both his body and his mind. By the time the bad guys show up, he's the Thing-Man, no wait, the Man-Thing, much better! 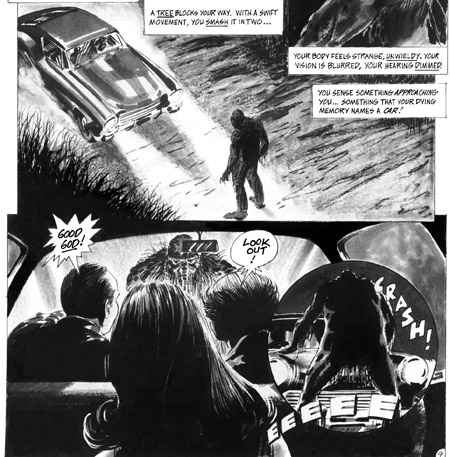 He kills the two guys first, one of them with a Bane Back Breaker, and then reaches for his former lover. He's not too sure what motivates him, just that she caused him the deepest pain. She is frozen in fear, and for the first time in Marvel history, someone BURNS AT THE TOUCH OF THE MAN-THING. 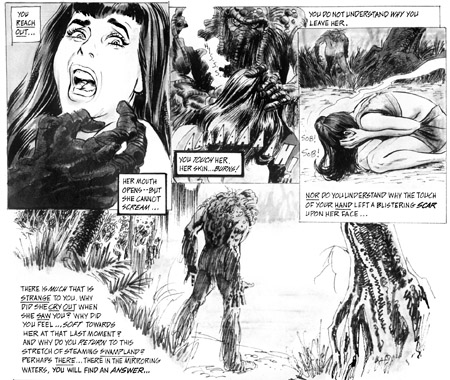 Perhaps Man-Thing was also devised as a one-off tale of horror. He wouldn't appear again for another year, at that point integrated into the Marvel Universe in a Ka-Zar story (Astonishing Tales #12) written by... Len Wein! Hey, what's going on here?! And at this point, he's very much stumbling into stories as an observer drawn to someone's fear and burning it with his touch. Conway ends up giving him his own stories in Adventure in Fear as of issue 10, THE SAME MONTH Swamp Thing #1 premieres.

Regardless of any cross-pollination, it's interesting to me that Gerry Conway originated the character, but that Steve Gerber is the writer most associated with him (to the point of collections touting "by Steve Gerber", though yes, he did pick up the baton in issue 11 of Adventure Into Fear), which reminds me that though Marv Wolfman is the writer most people think of in regards to Marvel's most successful horror series of the 70s, Tomb of Dracula, was actually ALSO started by Conway. I guess Gerry was a good start-up man.
Comics Man-Thing Swamp Thing