Who's This? A TALL brain more than a BIG brain. 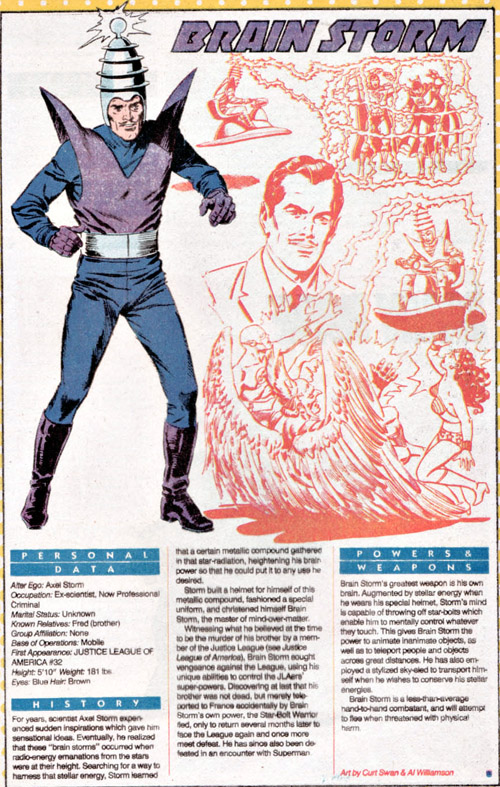 The facts: A Justice League of America villain as of JLA #32 (1964), Axel Storm invents a helmet that captures cosmic rays and converts them into psionic powers. It's pretty doofy-looking, which I think is why he didn't have a LOT of return engagements. By the 70s, he was fighting Lois Lane and Jimmy Olsen sans Superman, and in the JLI era was one of the villains who lost their gadgets in a poker game.
How you could have heard of him: It's more likely you heard of the guys who co-opted his nom de guerre. Well, maybe not the one who was in S.T.A.R. Corps, but Dominic Lense, the Mister Terrific villain who turned up in the Flash TV show. Not the same person or shtick.
Example story: Justice League of America #36 (June 1965) "The Case of the Disabled Justice League!" by Gardner Fox, Mike Sekowsky and Bernard Sachs 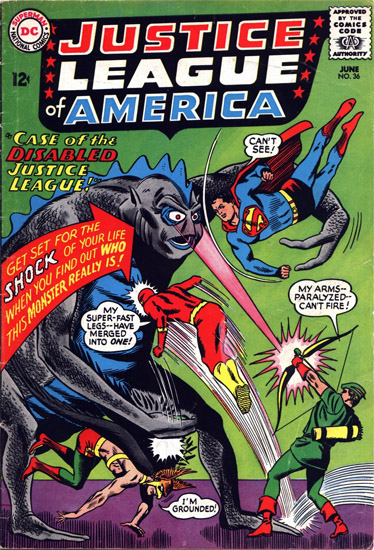 Brain Storm's second appearance is in a special episode of Justice League of America, prefaced by the League visiting kids with disabilities in a hospital. The blind kid asks for a demonstration of Superman's telescopic vision to which Green Lantern responds by creating a screen that shows just what Superman is seeing. Uhm... And because they just KNEW the kids would want to see the Secret Sanctuary, GL has also turned Batman into a monster AT THE MOLECULAR LEVEL (the one on that cover), which creates a great reason for the JLA to leave early, but let's assume they prepared this as entertainment. Just in case someone would want a demonstration of the least spectacular power they had among them, y'know. When the Leaguers get there, Batman is kind of overdoing it and really trying to kill them - with crazy "anything goes" powers like blinding Superman and merging Flash's legs together - so what gives? By the end of the fight, Superman is blind, Hawkman has asthma, Flash can't walk, Green Arrow is armless, and GL has... a stutter. But it still hampers his ring-slinging. The reason: 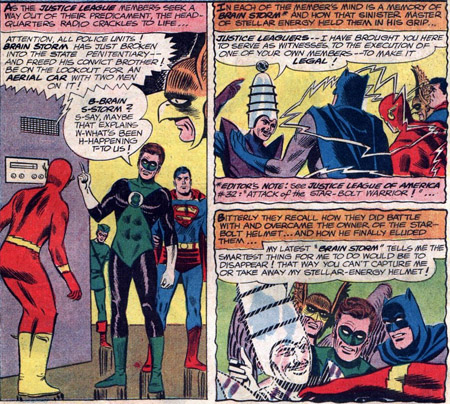 As soon as he's hampered the League, Brain Storm breaks his brother out of jail. That clinches it! As they are disabled, this will be a great lesson for the disabled kids STILL WATCHING back at the hospital. (Is it me, or does Gardner Fox not like putting limits on powers? GL and BS - ha! - can basically do anything.) Brain storm, who has brain storms inspired by brain sto--I mean, by stellar energies, has decided to kick the League when it's down. But not, like, destroy them entirely with the first wave of effects (if you can remove a man's arms, why not his head?). And even with these impairments, the Leaguers aren't exactly useless. See this fight against animated rocks: 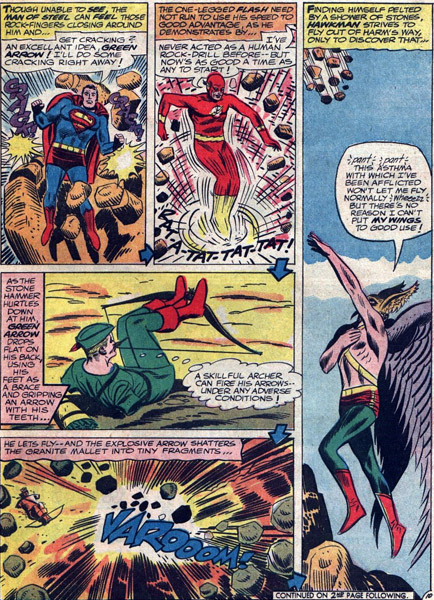 Apparently, Green Lantern gives his ring VERBAL commands, which is why the stutter is so devastating, so Brain Storm's brother Fred, who was in jail because of GL, can get the drop on him, temporarily. As for the main villain, he can conjure stuff up to fight the rest of the League. 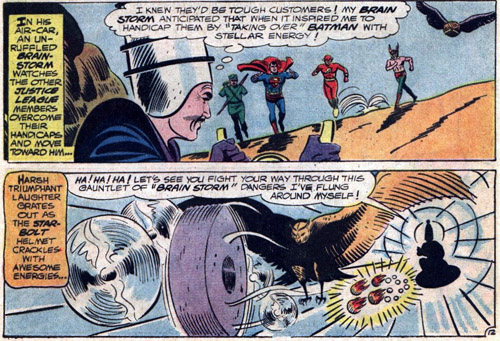 This is essentially Fox's main strategy for creating JLA villains. They have to be able to generate problems for all Leaguers present so they tend to be small gods who waste a lot of time creating foes to fight the team indirectly. Despero is another relevant example. It's always fun though when the lowliest on the team gets the better of the Big Bad. 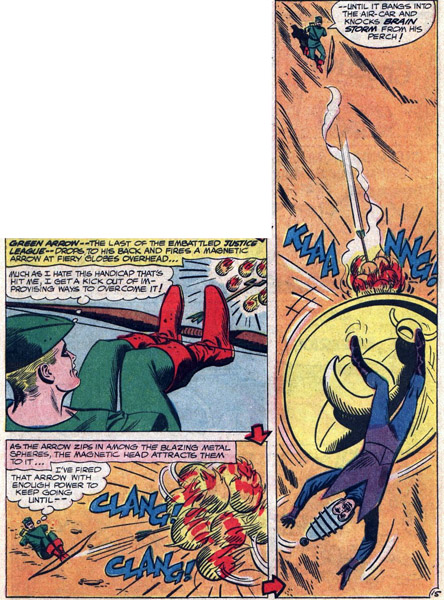 Next thing you know, BS is on the ground shouting at Green Lantern to stop hitting his baby brother. And then he gives up, on account of having run out of brain storms, restoring the League's full abilities. Except there's a whole chapter to go. On their way to jail, Axel has another one of his brain storms - truly, the universe provides - and it's to turn everyone into a Brain Storm. 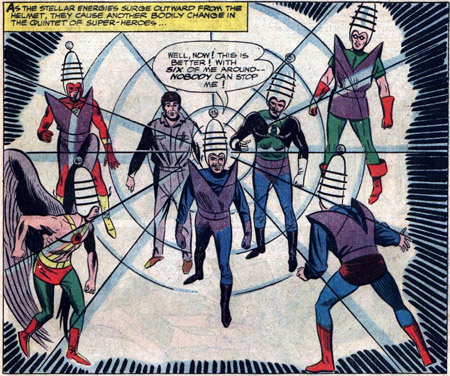 The hope here is that they all die of embarrassment. Or make an army of himselves under his control. That's when you realize why Aquaman, Wonder Woman and Martian Manhunter were late to the meeting. Also, Batman has kind of been forgotten so joins them to stop the Brain Storm Brigade. But the brain storms keep coming: What if all the Brain Storms were also the Flash? 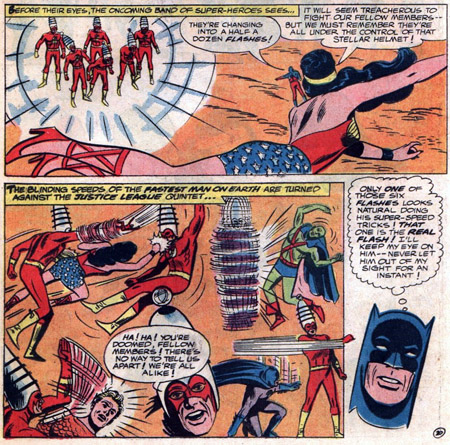 Batman's alert eye allows him to parse out just who the real Brain Storm is as the group successively turn into Green Arrows, Hawkmen, etc. A quick word to J'Onn and it's lights out for the real BS. 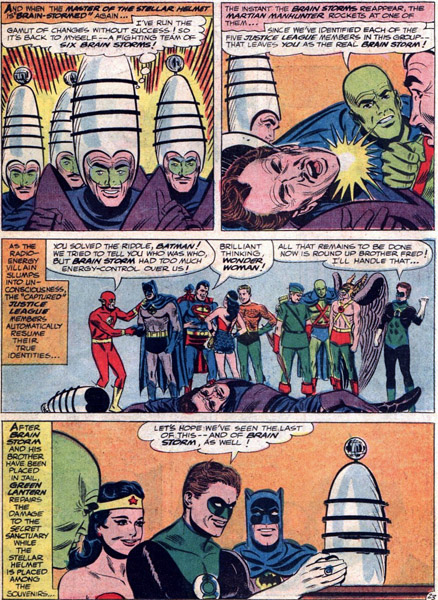 And that's one more illegally-confiscated piece of technology for the trophy room, yay! And all the kids were inspired too and went on to lead productive lives, yay!

Brain Storm was never gonna make it out of the Silver Age as a major player for three reasons:
1) He looks silly.
2) His powers are too great and ill-defined.
3) He's actually pretty dumb.

At the core is a Batman villain who gets psychotic "inspirations" from the stars, but to play against the JLA, he needs an advantage, and that advantage is also his downfall (see points 1 and 2). Oh well.