Who's This? The martial artist who's somehow not been in a Suicide Squad movie yet. 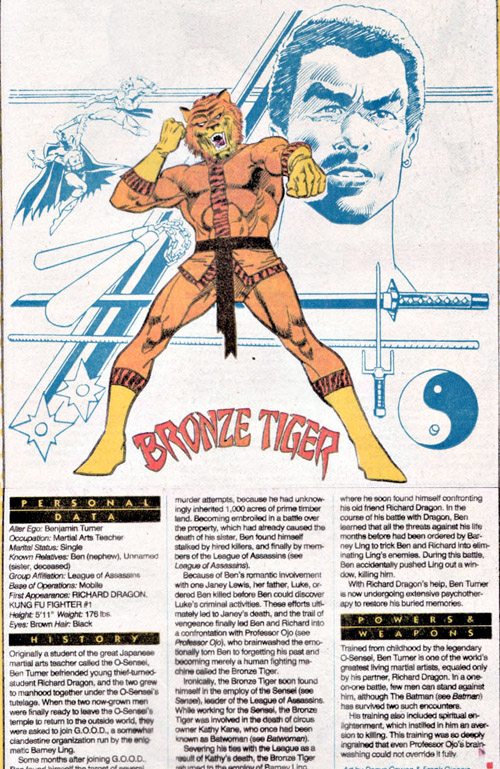 The facts: I didn't know this but Richard Dragon and his cast actually first appeared in a NOVEL, "Dragon's Fists: Kung-Fu Master Richard Dragon" by Denny O'Neil and Jim Berry under the pseudonym Jim Dennis. THEN, it was adapted into a comics series at DC in 1975. Ben Turner is Richard's fellow student and friend, and doesn't become the Bronze Tiger until the end of the series. Translated into a deadly assassin for the next decade (and appearing only occasionally), much of his back story would not be explored until the 1987 Suicide Squad series, in which he was a main player, "deprogrammed" by Amanda Waller so one of the good guys on the team. In and out of the Squad after the series wrapped, he also occasionally allied with the Batman Family in the 90s and 2000s.
How you could have heard of him: While he's a member of the League of Assassins in the New52, he should be best known to Arrow viewers where he is played by Michael Jai White. AND YET, still no movie appearance, despite the films really wanting a strong African-American character near the top. I'm not saying Will Smith or Idris Elba would be convincing martial artists, but when you're including Bloodsport in the line-up, you're really reaching.
Example story: Detective Comics #485 (September 1979) "The Vengeance Vow!" by Denny O'Neil, Don Newton and Dan Adkins 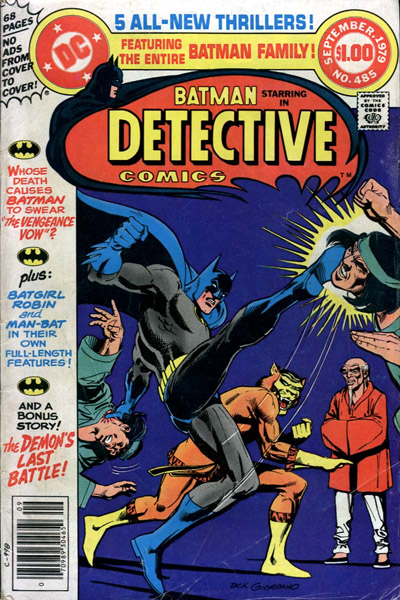 So I wanted to see what LANDED Bronze Tiger in the Suicide Squad. What kind of criminal shenanigans was he up to, and do we still recognize the haunted but virtuous character he would later become?

So our starts at a circus - Kathy Kane's circus! - somewhere in the Southwestern United States, where Batman has tracked the League of Assassins. Just ask Deadman, these guys are always lurking around circuses. They're here to bump off the former Batwoman who really CAN take care of herself, but she's not gonna say no to Batman lending a hand, so long as she can lay a kiss on him. 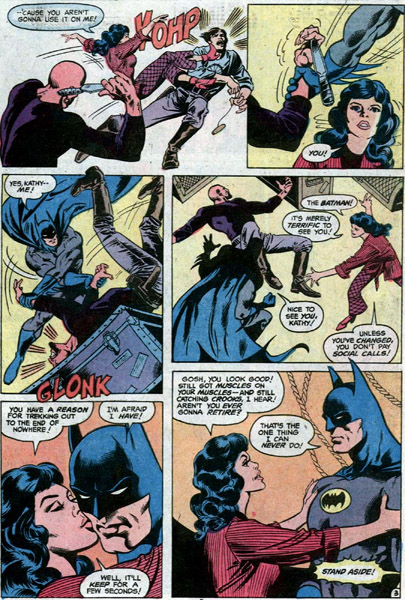 But what does this have to do with the Bronze Tiger? Well, BT creator Denny O'Neil has recycled him as a member of the League. Like a swift jungle cat, he's on Batman before his cheek can cool down. 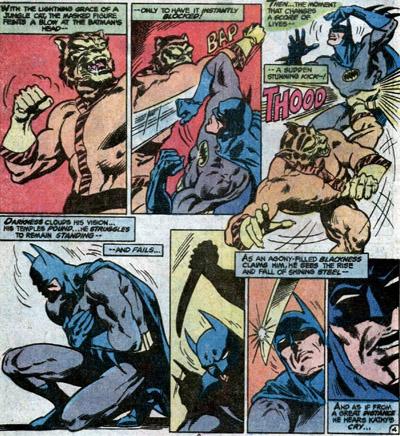 Has Batman met his martial match?! He's not the target though, and the League doesn't work for free. So despite the sword blade in the shot, Ben and his men leave the tent. By the time Batman recovers, Kathy Kane is DEAD, clutching her Batwoman uniform in her hands. Man, I was not expecting that. Ra's al Ghul shows up to tell Batman Richard Dragon villain "Sensei" was behind the hit and off Bruce goes. See, Ra's wants complete control of the League, but his rival Sensei has become unstoppable since he recruited the Bronze Tiger. Back the cave, Bruce is real worried about this opponent, because it shouldn't be possible to drop the Batman with one blow (ok, Mr. Ego). 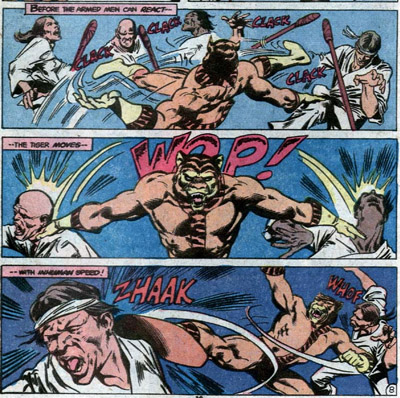 This is for the Sensei's pleasure, but when he asks Bronze Tiger to FINISH THEM, Ben refuses to kill. His training goes deep, and even though "his memory is gone", he still cannot take a life. Sensei hopes to break him of that habit, for surely, it's not the best thing to have on your League of Assassins CV. Meanwhile, Batman has infiltrated the compound, deals with dogs and henchmen, and finally confronts Sensei. In a real kung fu move, Batman doesn't come in swinging, nor does he take out Sensei. Rather, he challenges Bronze Tiger to a one-on-one fight, and Sensei's men are ordered not to interfere. Ok... FIGHT! 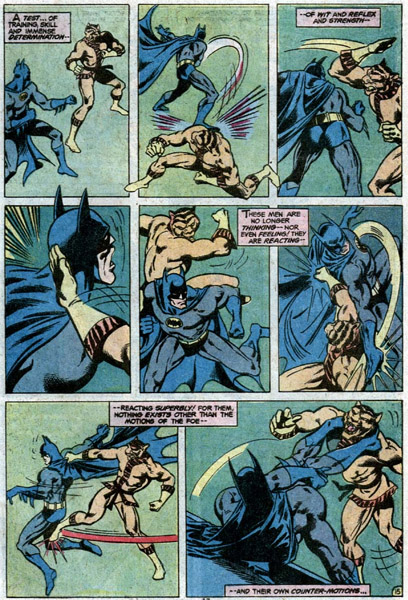 A pretty good blow-by-blow sequence from Don Newton there, which ends with Bronze Tiger being thrown. Fight's obviously not over, but there's a fly in the ointment. A henchman Batman previously defeated wakes up, fears he'll be killed by his boss for his failure, decides to use a poison dart on Batman. So he gets killed by Sensei for ruining it, but Batman's brought all the antitoxins possible for just such an eventuality. We know this, but the bad guys don't, and before Batman can take an antidote, he's still on the floor struggling. So Sensei tells his men to kill the Bat and be done with it, at which point Ben reacts. 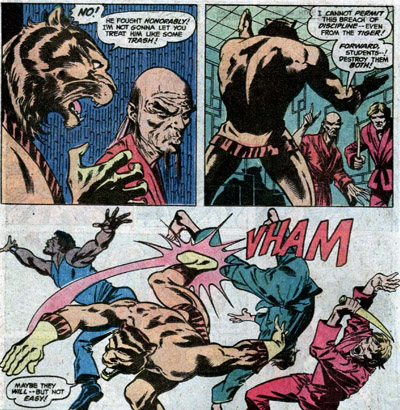 Recognizing his honor, Batman goes for a light switch and plunges the room into darkness to give Ben a better chance against these several members of the League, but Bronze Tiger still takes a dagger to the back. But when the lights go up...

As we know, the Bronze Tiger did survive, and further, he never truly went bad. Used as an enforcer only, the story makes it clear that he never killed anyone. O'Neil wouldn't corrupt one of his own creations. We definitely see here the compromised type of "hero" that would fit in Ostrander's Suicide Squad, don't we?

Who's Next? A big Omega Man.
Batman Comics Suicide Squad Who's This?