"Gordon, where'd you learn to shoot like that?" "I've been doing that sort of thing since before you were born, Captain." 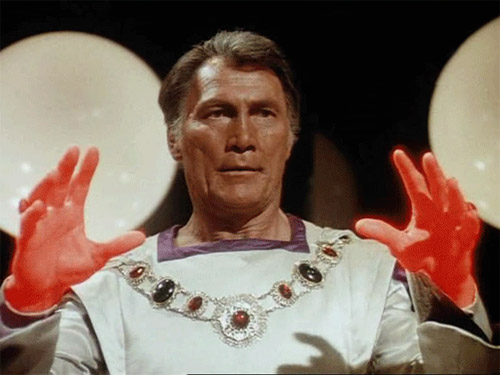 WHAT'S UP, BUCK?: Earth's defense squadron becomes incapacitated after ingesting poisoned food; the fault likes in a cult leader on a slaver planet.

REVIEW: The first story made directly FOR television has a number of additions that still lived in my memory. The opener with Buck spinning through time. Stargates as a trippy means of travel between star systems. Wilma's blue satin catsuit... They've softened her up since the pilot, without taking away her strength. In fact, I think a more human portrayal works better than the "ice queen begging to be melted" shtick of the movie. The show wants to be stay true to the sexy roots of the pilot film, but is hamstrung by television norms perhaps, so it's relegated to double entendres and Wilma's relationship with Buck (and perhaps simultaneously with his rival Major Duke Danton) is kept way in the background. We fully understand what their dick measuring contest is innate of, but I'm sure all they really want to do is GO ON DATES with her (the final suggestion of a threesome sends us to credits without confirmation). Then again, this is an episode with a title that explicitly references "slave girls", and some of these are thrown at Buck so he can have hot tub sex with them. AND YET NEVER DOES ANYTHING. In a possible drinking game, you should probably finish your drink if the plot sexually frustrates Buck. I suppose the worst entendre doubled is the "Funk & Wegnels" reference, which I don't get, and sounds, well read it out loud. Also take a drink anytime someone says "Ahhh Buck!".

I've read that Gil Gerard had early complaints that the show would produce crime-solving plots that wasted the science-fiction premise on what could normally be done on dozens of crime shows. This is one of them, with the mystery of tainted food bringing the heroes to an agricultural planet thriving because it maintains a slave population. Buck is the one of two people in this century who sees what's wrong about that (the other is the governor's son), so he'll get involved. Turns out the slaves are sold by one of their own, Kaleel, a cult leader played by Jack Palance, who's clearly having fun, twirling his cape and making his hands glow like he's in King Boxer (it's only missing that Ironside sting). At first, he seems like a union agitator, righteous, but then you have to factor in he's played by Palance, so he's gotta be a creep. Kaleel sounds like Kali, and indeed, Roddy MacDowall's governor is in full raja dress (and unfortunate brownface), so this is the show's take on pulp thuggee tropes (see Indiana Jones and the Temple of Doom for another example). Insensitive. Kaleel means to poison Earth's forces so he can then send his guys to easily take over the planet (and his own, I imagine). And only with Buck's knowledge of football tactics (again), can the Earth be defended with the small number of pilots who don't get sick.

The small squadron includes Buster Crabbe, the original serial Buck, as Brigadier Gordon (he was also Flash Gordon), who comes out of retired to help during this crisis. It leads to a couple of nice "changing of the guard" moments. I don't think the tactic as explained is actually what happens on screen. Is this really a good example of red-dogging? And since you were part of the enemy fleet (escaping the planet), Buck, why not start shooting them from the back? Twiki even gets to pilot a fighter in this. Somehow, we still win. The father-son subplot resolves in a kinder, abolitionist regime. And Kaleel is shown to be a fraud.

Along the way, there's plenty of incident (it's double-length and actually longer than the movie). Buck and the girls escape a swampy dungeon (which fixates on Wilma's bum wiggling through a drain pipe). Buck and Duke fight Tusken Raiders in the desert. Bad girl Stella throws explosive boomerangs and sabotages the only A.I. than can analyze the food... It's fun enough, though not always well-realized - obvious stuntmen, oddly choreographed action, oh and that silly bit where Buck puts a grenade under a helmet so it propels him upward - so I wish there were more character moments, like Buck being wistful about the girlfriend he left behind in the 20th Century. If you're going to have all this extra time, not everything need to be about plot is what I'm saying.

STAR GAZING: Roddy MacDowell, who made his mark on science-fiction by starring in the Planet of the Apes films, is the thoughtless Governor Saroyan. Jack Palance (before he revives his career with Ripley's Believe It or Not, Batman '89 and City Slickers) is of course Kaleel (also watch for a young Tim Robbins as one of his followers). Land of the Giants' Don Marshall features as Julio. And as mentioned, the original 1939 Buck Rogers (AND the original Flash Gordon), Buster Crabbe, shares a couple moments with his contemporary analog, as Brigadier Gordon.

ALL THIS HAS HAPPENED BEFORE: The stargates introduced here may or may not have inspired future SF shows like, well, the Stargate franchise, and Babylon 5.

VERSIONS: Eventually split into two episodes for syndication, the cliffhanger occurring when Buck's craft goes down in the desert.

REWATCHABILITY: Medium - Certainly not without its problems, but a normal episode of the show, which is to say it has humor, action and good guest stars. In this case, bonus points for Buster Crabbe's send-off.
Buck Rogers

Mike W. said…
This sounds vaguely familiar, but it's been so long I don't really remember any of it. I'm gonna have to get these and re-watch them.

By the way, Funks & Wagnalls was (is?) a publisher known for their dictionaries; "Look that up in your Funk & Wagnalls!" was a recurring catch phrase on Laugh-In (usually by Dick Martin I think, but that show was before my time so I'm not certain). So depending on the context, the reference Buck made might've been relatively innocuous.
June 16, 2021 at 3:15 PM

Henchman or second-in-command Galen is played by Bob Dowdell, who had the third billing as Chip Norton in Voyage to the Bottom of the Sea after Basehart and Hedison.

Ah, Wilma's catsuit... Wasn't this the beginning of having Buck in very tight pants and/or without shirt every so often? Pretty equal opportunity, I'd say. While I personally belong to the camp that merely doffs one's hat at Gerard's civic courage, I've been led to believe that Buck was something of an eye-opener if seen at a certain age.
June 16, 2021 at 3:39 PM