Category: Millennium
Last article published: 18 October 2015
This is the 72nd post under this label 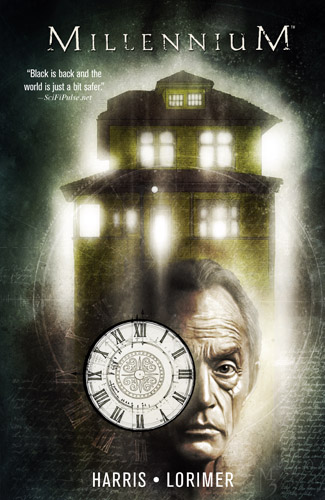 ACTUAL DOCUMENTED ACCOUNT: The 2015 five-issue mini-series from IDW, by Joe Harris and Colin Lorimer. Fox Mulder joins Frank Black in his crusade against the Millennium Group, which has recruited his own daughter.

REVIEW: Spinning out of IDW's X-Files Season 10 series, with a creative team that had worked on it, the Millennium mini-series suffered only really from not becoming a successful monthly, because while it brings us up to date (the year is 2012, 13 years after the Millennium Group was seemingly destroyed by Frank), it leaves a lot on the table for further stories.

The Millennium Group is back (or never left, just went underground), and in the interim, has recruited Frank's daughter Jordan, now a college-age adult. She has his second sight, but may hold more power even than he does. A flashback to her induction suggests more than we actually understand, but is pretty creepy. What happened to the little girl from the show?! The series also brings back Legion, the collective name of demons who are all facets of the Devil, and Lucy Butler, its frequent avatar. Of course, you can't defeat "Evil", so though a particular demon, released from the body of a serial killer, is "contained" by Jordan at the end, the book doesn't waste time showing Lucy hanging on the old house's rooftop. Plainly, they wanted to do more with Frank Black; sales just didn't justify it. So "the adventure continues" is the chosen ending, and we might imagine Jordan as a legacy character, replacing her old dad in the stories.

To try and get more readers, Mulder is on the case too, though largely unnecessary. Always glad for his deadpan wit, and it adds to Legion's power that he almost succumbs to it in the climax, but he's taking time away from the Millennium leads, where Harris could have clarified some things, or made the ending feel less rushed. There's also a gag about Frank having the same name as the lead singer of the Pixies - which has always been on my mind, always - that's a bit of an indulgence. As for the art, Lorimer is good at making the book feel cinematic and drenches the pages in atmospheric inks. Sometimes, I'm hard-pressed to recognize certain characters (too many men in suits), but his likenesses a good without looking like trace jobs. Even Jordan could pass for an older Britanny Tiplady (photos of her in her teens have her with a similar hairstyle).

THE TRUTH IS OUT THERE: I want to say the Millennium Group became the Three Families in Torchwood: Miracle Day, but I don't know that I can cross the streams that way.

REWATCHABILITY: Medium - A good beginning, but unfortunately, less closure than what the television stories offered.