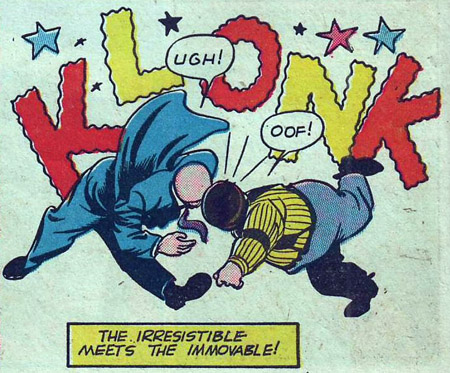 The inclusion of a caricatured character like Woozy Winks or in this case Doiby Dickles in a superhero narrative like Green Lantern's really shows comics' roots in the comic strip medium where such characters were, and still are, abundant. Scenes like this one, in which Doiby comes dome to dome with a bad guy (neither gets up) would be at home on the newspaper page, no "action plot" required.

Characters like Doiby put the "comic" in "comic book". Is that something missing from today's action books?
Comics Golden Age Green Lantern One Panel

Bradley Walker said…
...Is it petty of me to mention that Doiby Dickles is GL's comic relief, and Woozy Winks is supposed to be Plastic Man's sidekick?

Comic Relief characters have been around forever -- remember Harold H. Harold? -- but they'd have to go some to be more outlandish than Sargon the Sorcerer's Maximillian O'Leary.
June 17, 2021 at 4:51 PM