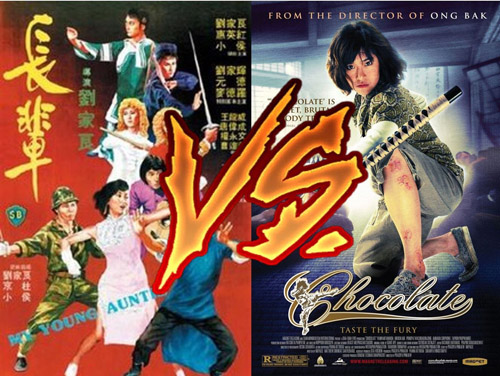 It's very flattering. The Alberich Bros. not only invited me on one of my favorite podcasts, Action Film Face-Off, but also created an event called "Enter the Siskoid" for the occasion. Normally, they draw random years and choose a film for each, which are then pit in the arena. In this variant, they let ME pick the movies from the random years based on my nerdish expertise in martial arts cinema. From 1981, I picked a favorite Lau Kar-leung picture, My Young Auntie. From 2008, I wanted to rewatch the Thai action flick Chocolate, made by Tony Jaa's crew. Two women enter, one woman leaves!