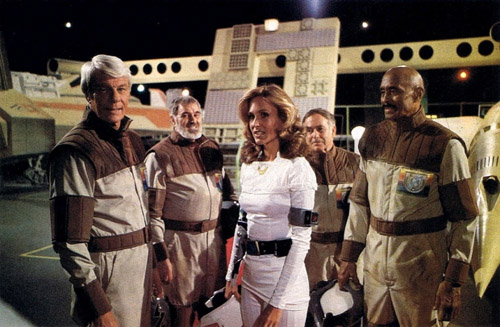 WHAT'S UP, BUCK?: Retired pilots are brought out of retirement to guide Buck and Wilma to a villainous HQ.

REVIEW: From the premise alone, given that the show has had trouble choreographic outer space action, I wasn't expecting much from this one. But while my fears are eventually allayed, it's hard to shake the sense of déjà vu (see All This Has Happened Before). The opener works well enough, with a training mission turning into sudden field experience that gets a couple cadets killed. I like how Buck really digs into Wilma about her fatal decision here - and it's not the first time her orders have gotten pilots killed - but she gets off easy. I should think this would have normally elicited a formal reprimand AT THE VERY LEAST. As it turns out, it's a play on the theme of youth versus age, because while inexperience did these boys in, the plot will require the participation of a squadron of has-beens. The younger models will get captured (but still prevail), while the old warriors win the larger victory, etc. Buck sneers at Wilma's ageism, but it's got to be said this society keeps its citizens employed until the age of 85. It just happens the Fighting 69th (69? yes, of course, it would be) have been summarily retired because Wilma herself had kicked 'em out of the service after they failed their physicals.

This is a big one for Wilma. You might say it's even a shortcut to giving her some background. The villains in this have stolen a cache of weapons from Earth Before the Fall, including deadly nerve gas they mean to spread in Earth's atmosphere as revenge on Wilma, whose squadron had maimed them while trying to stop their gun running operations. Corliss is severely scarred and has an electronic eye, and his paramour Roxanne has a metal arm. So it's personal. And the only pilot able to navigate the perilous asteroid field where the villains have their base is Noah Cooper (Peter Graves, whooo!) who just so happens to be Wilma's mentor and father figure who she drummed out of the marines, perhaps more out of love and worry than actual reason (he seems pretty sharp). So this too is personal. And I have to give it to Erin Gray. Once we get past the whole false dilemma of not wanting Cooper to bring his old squadron on the mission (Buck gives her a talking to, she later returns parroting his words, meh), she's great in this. Whether facing off against Corliss and Roxanne, (ridiculously) distracting the guards with her curves (still more believable that Buck's flying kicks a moment later) and asking them to strip, thinking Cooper didn't make it out alive, and so relieved when he does, she hands in a touching performance. Her best yet.

Some of the old guys are a little cookie-cutter just to make up the numbers, but for the most part, they're memorable. Cooper makes a deal, his help in exchange for the reinstatement of his entire team, but he's also honest about being out of practice during the trial runs. He's always watchable; I could have spent more time with him. Big Red is also fun, taken to whistling and humming absent-mindedly when nervous, to his partner's distress. I love love love the bit where he's being given instructions and a "stop humming" slips in there. They do well and get their reward, though it almost doesn't matter when they think Cooper was killed (along with a husband-wife team). Dr. Huer is quite dense not to get all this, but just when you think the show has finally decided to kill some people off (and indeed, the villains buy it), Cooper returns, having simply been blown off course. Had he died there, I'd be complaining about the effects once again failing to make things clear, but seeing as they had a reason to play coy AND I love Wilma's reaction, I'll shut up. I like how the tables are turned in the climax, where now Cooper has the same kind of conflict of interest when his team needs to bomb the base knowing his surrogate daughter in inside.

This would have made the episode emotional enough, but there's more. Roxanne has a slave girl stolen from Earth years ago (someone has to dismantle this slave trade, Buck, I think it's gonna have to be you), who is cruelly treated by her mistress. These guys make the same mistake Kellogg made in the previous story - you can't ensure loyalty through cruelty. During a sadistic (but novel) torture scene, we learn that Alicia was deaf-mute all along! (Indeed, she is played by dead-mute actress Katherine Wiberg.) Buck can use sign language and immediately crafts a bond with the girl that will come in handy when he and Wilma need to escape a jail cell. The gut punch comes during the epilogue, with Buck arriving late to a cocktail party because he had gone out to find Alicia's parents. Cue teary reunion. What? No, my eyes are naturally this wet, what are you talking about? I love Buck's innate kindness in this episode, so it's a good episode for him too.

And it's not just tears, there's a lot of fun too. In the stash of stolen weapons, there are also machine guns, which the villains think are useless communications arrays. Buck uses one to send them a message in the final escape, and there are shells EVERYWHERE! So used to blanks in TV shoot-em-ups that this is automatically more interesting. I'm mentioned a lot of the humor, but I'd be remiss if I didn't also talk about the final joke (gotta go with that freeze frame laugh!). Twiki asks Wilma for a dance and she refuses. She asks Buck if HE wants to dance and he accepts. So she tells Twiki she's found him a partner. Freeze frame wince and please, do finish your drink.

SPACE DISCO: Another bar, another disco vibe. Twiki wants to dance at the final cocktail party because that's what you did in the disco era.

STAR GAZING: Peter Graves (Noah Cooper) needs no introduction, but let's mention the producer on Mission: Impossible now works on Buck Rogers, so the connection is pretty obvious. Of the rest of the squadron, Woody Strode (Big Red) is the most recognizable, either from Spartacus or what I consider his best role, Sergeant Rutledge. Robert Quarry (Corliss) starred as Dracula rip-off Count Yorga in a series of films in the 70s. Lucky the dog, the 69's mascot, was a rescue dog elevated by the National Inquirer, a tabloid that routinely put the dog in TV shows in exchange for coverage. So if you're glad to see dogs making it to the 25th Century, you have the Inquirer to thank.

ALL THIS HAS HAPPENED BEFORE: Essentially a combination of two past episodes (and we're only on #6), with supervillains wanting to destroy the Earth (The Plot to Kill a City), bringing old pilots out of retirement (Planet of the Slave Girls) and a helpful slave (both). The tail gunner swivel chair is yet another nod to Star Wars. Another might be when Alicia wears a guard uniform to escape with the two heroes; she's REALLY short for a Stormtrooper.

Anonymous said…
Yeah, all the guards looked to be the same size, but their uniforms fit Buck, Wilma, and the girl perfectly. A pretty good episode overall; I always like to see Woody Strode.

Charles Izemie said…
Now you had me checking my Blu-ray set, because I couldn't for the life of me remember Robert Hardy being in it. I'd have thought he was at that time busy in the Yorkshire Dales and at the Pebble Mill with half the crew of Doctor Who shooting All Creatures Great & Small.

Given that he played Clayton in Buck Rogers, so the credits say, I have to say that either he's doing a very good impersonation of a younger and slimmer man plus a PoC to boot, or the cadet in question is a completely different Robert Hardy. I suspect it's the one for whom the IMDb lists a handful of credits around 1979 and 80. Against Kate Mulgrew as Mrs. Columbo, for instance.