"This isn't fair, you know. You're using your unnatural height to your advantage." 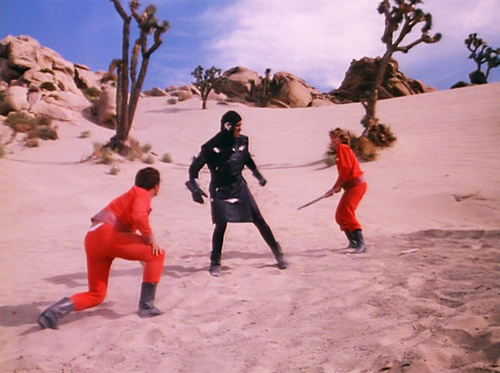 REVIEW: Buck once again poses as a criminal (is it because he doesn't have a trackable identity in this century?) to infiltrate, in this case, a prison, and it's the third episode in a row where the villains have spies/traitors working in sensitive Terran positions. Maybe Gil Gerard was right about those "samey" plots. But there are still some things of interest in Unchained Woman.

Most obviously, it's Jamie Lee Curtis as Jen Burton, the woman Buck must break out of an impregnable jail on planet Zeta. You couldn't tell she was essentially a no-name at the time, as she carries herself like a star and is always watchable and better than the material written for her. We don't languish in the underground prison for long even if we're led to believe we will after Buck's "important medallion" is confiscated. It's all part of a clever ruse (on us as much as the guards), as it explodes and opens the 200-meter shaft for the convicts to climb. What then follows is a walk through the desert through beautiful locations, towards excellent matte shots, ending up in, meh, an okay Mexican Western backlot set to meet up with Wilma. The usual twists, reversals and backstabs ensue, until Jen Burton sees the light - that she shouldn't trust the crook she's been covering for but who is intent on killing her before she blabs key information - and the baddies are in custody. It's not all great - the character of Sergio is an annoying con man (who nevertheless gets the best line, see quote above), and Pantera's moll Majel gets rather strident as she begs the heroes to help her man against a killer android - but there's a lot of movement and energy so you don't get bored.

Killer android? Why yes, 5 years before The Terminator, this show produces a tall unstoppable mechanical hunter who simply won't stop. He's even got analytical android vision. "Hugo", as Buck calls him (the story is vaguely inspires by Les Miserables, see also Buck's secret identity as Val Jon/Valjean), gets all the best action beats, like getting grabbed by a sand squid, taking a lot of squibs, kicking rocks around irately, and busting through the wall like the Kool-Aid Man. I also love his deadpan message about escape being impossible as he lies stiff under rubble. We were introduced to androids (if Twiki doesn't count) in The Plot to Kill a City, but Zeta seems to have refined the technology. While Hugo's voice is treated to sound more mechanical, the prison shuttle pilot who brings Buck there feels very human indeed. He has emotions and he's constantly out of breath. I don't know why Zetans feel the need to make them so realistic (they're not exactly sentient, or else Wilma reprogramming one would be criminal).

And this is a good one for Dr. Huer, who not unlike Wilma is the previous episode, is given personal stakes. The ambassador for Zeta's region is an old friend of his, but also the man who's been selling secrets to Pantera. We've seen him wrestle with hard decisions before, and Tim O'Connor is always good at portraying these moments with melancholy resolve, but here, he feels he owes something to an old friend. I'm glad to see him get more to do.

SPACE DISCO: Of course Buck's way out of prison is a big-ass medallion (not sure why there's a Stafleet insignia on it). Majel gives off major Loni Anderson vibes.

STAR GAZING: Jamie Lee Curtis (Jen Burton) had only really done Halloween at this point, and it wasn't the hit it's now considered to be. Robert Cornthwaite (Ambassador Warwick) had been on television since the '50s, but for genre fans, he's a scientist in The Thing from Another World.

ALL THIS HAS HAPPENED BEFORE: Buck's stolen tunic with the cut-off elbows was first features in Battlestar Galactica's "The Magnificent Warriors", worn by Eric Server, the voice of Dr. Theopolis! The vehicle that brings Buck to the prison is also from BSG, the episode was "Greetings from Earth".

REWATCHABILITY: Medium - As a plot, it doesn't escape formula, but there's lots to enjoy. Also watch for Jamie Lee Curtis getting dragged through the sand and from dust placement looking like she's not wearing any pants. Oh, Buck Rogers...
Buck Rogers