Category: Monday Morning Macking
Last article published: 15 February 2016
This is the 7th post under this label 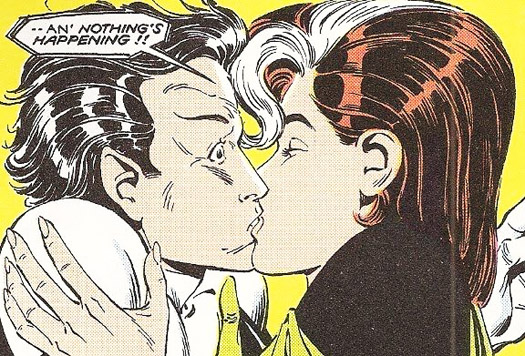 If Rogue's skin touches yours, she absorbs your powers and memories (I don't have the first, but lots of the second) and you pass out. Not great for romance, and the comics have gotten a lot of angst out of the situation. But if you're looking for shots of Rogue kissing people, they're very easy to find. Seems most people used to not cover the bottom of their faces (it was a simpler time), so kissing was an easy and startling way to get somebody's powers away from them. Plus long-running romances with Gambit (yuck) and Magneto (ick).

And then there's all the times Rogue's powers were switched off so she could randomly kiss someone with no ill effects. If I chose this one with Northstar, it's because both characters were, at the time, gay-coded. And if Rogue was then paired off with boys, Quebec's own Northstar's up 'til then only suggested sexuality managed to stick.