One Panel #567: The Guardian Steals the Book 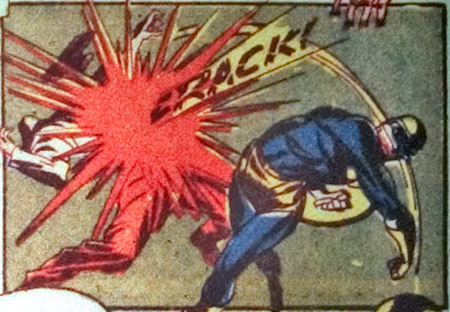 It's CALLED Star-Spangled Comics, and for the first six issues, Jerry Siegel's Star-Spangled KID was its headliner. They made a big deal of this in house ads, he had every cover, and two stories per issue, one up front, and one at the back. Well, I guess it wasn't meant to be. In come Simon and Kirby, having recently defected to National/DC and offering a Captain America/Little Rascals hybrid in The Guardian and the Newsboy Legion, premiering with #7. Star-Spangled Kid would continue to have a strip in the book, but the Newsboys became a big hit, and would have a stranglehold on the covers for the foreseeable future.

Also new this issue: Robotman! I'll be sure to throw in some of his panels as we move ahead! Oh and TNT & Dan the Dyna-Mite too! Meanwhile, Captain X gets his last paycheck until he gets referenced in Firestorm decades later. The other victim is Armstrong of the Army who lost his spot issue 6.
Comics Golden Age Jack Kirby One Panel