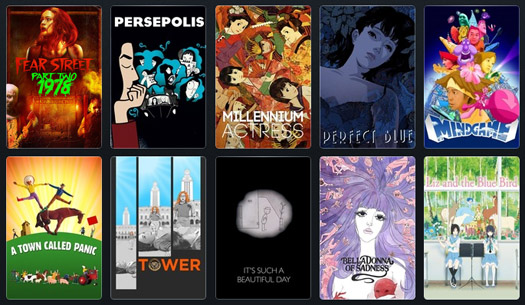 At home: Just like Part One gave us a Scream pastiche, Fear Street Part Two: 1978 does something similar with late 70s, early 80s horror films. Though there's the witch's curse element, it's essentially a slasher flick set in a summer camp, with horny teens getting chopped to bits (but replace virginity with the rich part of town as a protective amulet, as per the first film - those rich kids are the real monsters and I do hope something bad happens to them at SOME point in the trilogy). The heroes are two sisters, one of which must survive to tell this story in 1994. The soundtrack, though it repeats some tunes from Guardians of the Galaxy (have those movies ruined 70s music for every other movie?), is as fun and evocative of the time period as 1994's were (and by including the original of a cover used there, makes you feel like you're watching the movies out of order, as opposed to this being a "prequel". I'm taking all the Fear Streets as one long story, so kind of giving them the same score - they all have a stand-alone story, but neither is exactly complete (which, in horror, is fine). If I like this chapter a little less, it's simply because I'm less interested in this era of horror films.

Marjane Satrapi's autobiographical graphic novel, Persepolis, makes for a striking and unusual animated feature, one that puts you in Iran during its political shift from fascist to religious tyranny and makes you see through the eyes of a young girl, then a young woman. There are parts of the world Westerners just don't understand and paint with the widest possible brush. Iran in such a place, so on a didactic level, we learn a lot from Satrapi's remembrances. On an emotional level, her family and friends feel like real people (the granny is the best character, to be sure), and her memoirs are honest and can take the bent of confessions. And though you'd think revolution, war, political prisoners, torture, repression, and the never fitting in would be crushingly heavy topics, thanks to the animation, there's a light touch that keeps it bouncing along. If anything, it bounces too quickly, and when it ended, I was resentful and wanted it to continue for a bit.

It's worth looking at Satoshi Kon's work - I don't think he's ever put in an ordinary effort. In Millennium Actress, two documentary film makers visit an aged actress from the Golden Age of Japanese cinema, not only to tell her story, but to explore her connection to the mysterious key that defined her life. Her life and movies blur together in the narrative, with actors/characters playing different parts, and one wonders if her films were all, in a way, about her personal quest. Having the documentarists follow her into memories as if filming them is a great conceit, one that takes on new life when the older film maker reveals a hidden connection to the actress. And of course, it's beautiful. The acting is nuanced, and the there's an encoded tribute to Japanese films of the 40s though the 60s (and perhaps beyond - the samurai film sequence is part 1957's Throne of Blood, part 1985's Ran, for example). The more you know about Japanese film, the more you'll get out of it, but it's not needed to get into this tragic love story and its mix of straight drama and fantasy.

Satoshi Kon's celebrated first picture Perfect Blue starts out as a straight drama with thriller overtones about  a young pop star who leaves her girl group for a shot at becoming an actress. She's unprepared for fan backlash (this still feels fresh even if the Internet stuff is strictly late 90s, I wonder why), and must contend with a stalker and her own self-loathing as she agrees to debase herself for her new career. At this point, I should say I was totally unprepared for the level of sex and violence in this movie (even if the era almost requires it), and not only is there a lot of nudity and sexual violence, but gory murders start happening. And things get Satoshi Kon after that. Neither we nor Mima can tell reality from fiction from hallucination, the crime show she's working on manifesting in the real world (or mirroring it), Mima losing her grip and wondering if her pop star alter ego isn't doing things behind her back, and possibly, quite possibly, the psychological dove-tailing into the supernatural. A shock to the system that, in 1997, already understood the dark side of fan culture. 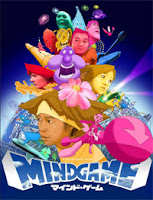 Mind Game... well, wow. Masaaki Yuasa's boisterously experimental anime doesn't shy from anything. He integrates different animation styles - realistic, expressionistic, photo montage, digital, whatever - and the story itself is impossible to predict. What if you died in violent circumstances and you chose not to go into the light and instead return to Earth? What if that gave you a second chance and a boldness you never had before? What if it turned into a kind of quantum field purgatory? Is it really out of God's hands, or is it part of His game in the afterlife? What if your life flashed before your eyes, but it was the life you could have had, should have had, didn't have? Questions racing through my head as I watched this or thought about it later, mingled with some truly insane visuals and tonal shifts. The ending is elliptical, but also poignant, and the climax has a touch of something Masaaki Yuasa would return to in the equally brilliant (if less surreal) Ride Your Wave. One to watch again and again because it's so rich in detail.

I was not aware of the early 2000's series of shorts out of Francophone Europe, Panique au Village (loosely translated as A Town Called Panic in English), but 2009's full-length movie is hilarious. It's basically stop-motion Toy Story without the over-sentimentality. All the characters are figurines standing on little platforms, hobbling along and speaking without any lip movement in order to replicate how a child might play. The mix of squeaky and gruff voices was a minus for me, but I respect the choice as being part of the same methodology. As the story goes, Horse (who is awesome), Cowboy and Indian (his idiot roommates) get into a load of trouble when a simple mistake on the former's birthday destroys their house. The balls-out insane consequences will take them out of the village into deep canyons, arctic wastelands and underwater kingdoms, which certainly puts a cramp on the horsey romance brewing between Horse and an equine music teacher. There's nothing that can't happen in Panique au Village because its rules are those of childish imagination. Now I gotta track down those shorts.

August 1st, 1966. The famous belltower sniper massacre in Austin, Tx. Tower uses the rotoscoping animation techniques developed in Richard Linklater's Waking Life and A Scanner Darkly to support a documentary revisiting the events of that day, minute by minute, using the accounts of the people who lived it as a basis for its recreation. Why animation? I think it has several effects. The first is that it takes the edge off the potential for sensationalism, going abstract in moments of violence. It also allows the viewer to better accept the recreation; though actors have been painted over, we're not seeing actors nor making value judgements on the casting, performance, etc. The talking heads material is done by the actors as the participants' younger selves, which creates an immediacy to the accounts. It also somehow creates suspense when it becomes clear not all the talking heads are still with us, as reality starts to blink into being and animation progressively drops out. Once we're discussing the aftermath, it thus becomes much more like a classic documentary, though certainly one that pulls at the heart strings. Tower is about the people who lived through the events - victims, police, heroes, bystanders - and not about the killer. We don't know what was going on with him, and perhaps we shouldn't care. It's a gap in the film, but one we can fill with our understanding of mass (school) shootings, if such understanding is possible even now. These events were Patient Zero for an epidemic to come.

The three stories about "Bill" that end with the eponymous It's Such a Beautiful Day may form a "trilogy", but it's all one existential story. Don Hertzfeldt's crude figures are wired for pathos and his poetic narration almost barrels by too quickly, taking us into the perspective of his protagonist, one that starts with depression and nihilism and progressively gets worse, losing his faculties with illness and age. Hertzfeldt contrasts the pain of existence with what we could call solace, a release from existential concerns through the shutting down of the mind - whether we want to see it as mental breakdown, brain damage, senility or something like Alzheimer's. The writer-director manages to find more beauty and happiness in the end/death than he does in more lucid moments/life. So while the overall feeling is depressing, albeit very well observed, the piece is ultimately hopeful, positive... lyrical.

Based on a story called The Witch, 1973's Belladonna of Sadness by turns offers blazing psychedelic animation and pans'n'scans of immobile watercolor paintings. It's a dark fairy tale set in the Middle Ages, in which a Jeanne, a peasant woman, is defiled by the king on her wedding night, her need for revenge making her fall into the clutches of a phallic Devil. Through him, she becomes an avatar for Nature and for Sensuality with a capital "S", over time usurping the Patriarchy's power. Jeanne's husband Jean acts as a pathetic counterpoint to her somehow blooming in this misogynistic world. Undoubtedly beautiful to look at, Belladonna is still a downer with some shocking moments of sexual violence, even if its surreal orgy scenes are boisterous and full of life. I admire it more than I like it, but fairy tales on film (or at least stories told in that mold) tend to keep me at arm's reach for some reason.

Naoko Yamada's direction is incredibly sensitive, detailed and moving in Liz and the Blue Bird, and it therefore packs a powerful emotional punch at the end. The story is simple, intimate and contained - a young oboe player is in love with the class flutist at an all girls' school, but they can't get in sync during an important solo (well, duo). The eponymous piece is based on a children's story she identifies with - and which acts as our only respite from the school, nicely differentiated with more old-fashioned techniques, watercolor backgrounds and flatter animated figures - but her misunderstanding of its emotional core is due to her own immaturity, and stifles her performance. It's a beautiful exploration of young unrequited love, made more complex by the lead having to chart the heady waters of same-sex attraction. Music really is her only means of expression as words, for the most part, need to be encoded so as to protect oneself. Which isn't completely different from any unrequited love, but the claustrophobic repression is certain made more acute by the characters' exact circumstances. Gorgeous.
anime Geekly roundup