What a Card: The Guardian of Forever

Being a look back at cards from the Star Trek CCG, and what I thought of them back when they were fresh and new... in EPISODE order. Historical Research promised us a card for Carl, so here it is... 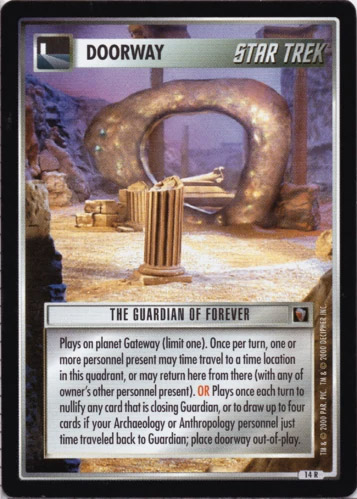 PICTURE: The big donut looks good here, surrounded by ruins, all well lit. Some CGI work went into the image, various characters having been removed from the image. It works well enough, though if they could have made the Guardian active, I might have liked that more. Still a 3.4.

TREK SENSE: There is only one Guardian, and it's on the planet designated Gateway (Historical Research). It allows your personnel to time travel to another (duh) time location, and the reason they specify the same quadrant is to avoid your going to the Mirror universe. Fair enough, it's not like there are DQ and GQ TLs. The return option is only for personnel who used the Guardian to get "downtime" in the first place, but they can bring back personnel originating in the past (natives) or that got there some other way. Not sure the Guardian would allow this, though rescues are more plausible (to avoid accidental tampering with time). Bizarre (but you must try to ignore it) is that the Guardian as shown on TV is from the same time period as Sherman's Peak. But of course, it endures... The second effect keeps the doorway open, which is fine and standard stuff. The third gives you a reason to time travel: for study! Yes, those that study history, Anthropologists and Archaeologists, may return from the past with findings that turn into card draws. That's a lot of card draws for studying history though, or were they CHANGING it in beneficial ways? No, I can't think about that. It's too big a can of worms. This must be a return BACK (as above), so that you started at Gateway and are coming back the way you came. Ok, overpowered, but I like the idea. As for the fact that the doorway is placed out-of-play, well that could be the Guardian's way of limiting abuse. Each card "convinces" him to let people through, and each excuse can't be used again. Leaves at quite a good 4.2.

STOCKABILITY: When you seed Historical Research, you may immediately download The Guardian of Forever there. No fuss, no muss. You can then use it to make your personnel time travel easily from there to any time location. What are you doing there? Well, in the case of Montana Missile Complex, Cetacean Institute and even Sherman's Peak/K-7, you might be trying to cause a time disruption. Sending modern personnel back could help you do that (or prevent it). In the case of Camp Khitomer and again Sherman's Peak, you could use a modern personnel to go back, then bring back free personnel reported to their native location, perhaps bypassing AU mechanisms and such (especially if you don't care for older ships). The real reason to use The Guardian however, and a simple TL besides, is for the massive card draws. On one turn, send over as many Anthropology or Archaeology personnel as you care to. On each subsequent turn, you may bring one of them back for up to 4 card draws! Again and again if you want more! One personnel can keep going back and forth, or multiple personnel can return one at a time. The only hitch is that you need the Guardians in hand (doesn't cost a card draw though), and they go out-of-play instead of the discard pile. You have to stock many of them if you want multiple draws, that's for sure, but even just one is hot stuff. Note that with Strategema, you don't need to fear Revolving Door and the need to waste a Guardian on reopening the doorway. A strong 4.4.

TOTAL: 16 (80%) Highly rated, not unlike the episode it stems from.
CCGs Star Trek