What a Card: Historical Research

Being a look back at cards from the Star Trek CCG, and what I thought of them back when they were fresh and new... in EPISODE order. The game features a couple cards from The City on the Edge of Forever, including this, out first mission card (in this order, obviously far from the first published): 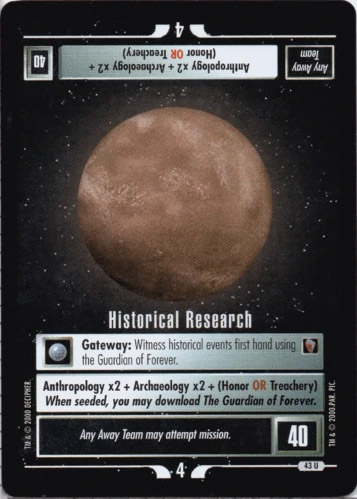 PICTURE: I didn't think they could make TOS planets look good, but Gateway proved me wrong. It's big, it's substantial, it looks like its surface from The Guardian of Forever, and the white specks on it kind of remind us of the ruins upon it (though I doubt they would actually be visible from orbit). The photo-brown or sepia color even matches the mission's title in theme. A strong 4.3.

LORE: I like it, and by that I mean I don't dislike it. Pretty standard, but holds my interest, perhaps because the mission is so unusual. A 3.1.

TREK SENSE: The thing about Gateway is that it must be a heavily guarded planet. If Kirk and Starfleet learned anything from "The City on the Edge of Forever", it's that the Guardian is not to be messed with. So is it fair to call this an "Any Away Team may attempt" mission? That's where I think the Honor/Treachery requirement comes in. You either have Honor enough that the Federation allows you access, or the Treachery needed to bypass Federation controls and access the Guardian in spite of a Federation presence. With neither of these skills above x1, that answer is a bit glib, but that's the best I can do. Lots of Anthropology and Archaeology are needed either way, since those two skills are the most interested in history. Since The Guardian of Forever was here, it makes sense that you could download it to the planet. That you only MAY is somewhat anomalous. Sure, you could beam down to another part of the planet, but the mission specifically mentions it, and I don't see how it could be completed without the Guardian "present". Finally, I have no problems with the points this would be worth (a high 40), or the planet's distance (span of 4) from main spaceways. Overall, it does well, but not perfectly. A 3.5.

SEEDABILITY: 40 points, which can conceivably be turned into 55 with appropriate mission specialists (non-Feds will need Kathleen Tonell, and non-Klingons will need to attempt with Treachery). For more solid Away Teams, there are only a few personnel with both Anthropology and Archaeology, and again only from the original 3 affiliations, with Vash showing up as the better personnel, missing only one instance of Anthropology to match all requirements. The planet is also quite necessary if you want to use The Guardian of Forever, and obliges nicely by allowing you to download the Doorway during the seed phase. With The Guardian of Forever in play, your personnel can travel to and from Time Locations effortlessly, and with Guardians played from hand, allow you to get pretty massive card draws for traveling Anthropologists and Archaeologists. Hmm, the very same personnel that help complete the mission. Come for the time travel, stay for the 40 points. It's a bit complicated as a card-drawing mechanism (you need the mission, multiple copies of the doorway, a time location, specific personnel), but if you're using a time location anyway, say to report free OS or CF personnel, it can be a cool bonus. It succeeds as a mission, despite being pretty stealable, but is also part of a grander design. A 4.4 here.