What a Card: Organian Peace Treaty

Being a look back at cards from the Star Trek CCG, and what I thought of them back when they were fresh and new... in EPISODE order. Last card from Errand of Mercy... 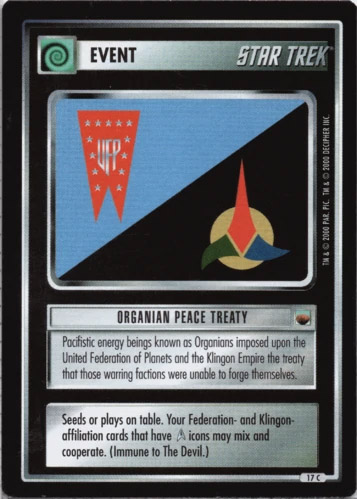 PICTURE: I love this. Treaty cards are rather dull, but using the old affiliation symbols from the Original Series was a stroke of genius. The old UFP pennant is probably the most dated, but the Klingon multi-colored "dagger" is fun too. Recognizable, but slightly off. A nostalgic and fun 4.3.

LORE: Well told, even though the syntax can be murky if read too quickly. No problems: 3.2.

TREK SENSE: I'll be a frequent opponent of Treaty cards in my Trek Sense sections. See, despite the opportunity to make an off-beat Treaty by focusing strictly on OS cards, this one is pretty much just like the others. Despite the Organian Treaty, we never really saw OS Feds and OS Klingons cooperate, did we? You're counting "Day of the Dove"? I wouldn't. They certainly "mix" in "Tribbles", but not without a fight breaking out. The Organian Treaty wasn't about cooperation, it was about non-aggression. If the card simply kept Klingons from attacking Feds, and vice-versa, I'd be happy with it. The only real difference with normal Treaty cards is that it is immune to The Devil, showing that the Organians are keeping an eye on things. They won't let petty temptations (i.e. The Devil) start a war again. Of course, you have to wonder where these guys went to after "Errand of Mercy", cuz the two sides were quite able to fight each other after that episode. Barely hits 1.2.

STOCKABILITY: I'd say this was basically a card for theme decks. After all, OS Feds and Klingons are covered by the standard Fed-Klingon Treaty already. The only real bonus is that it is immune to The Devil. Well, that's something at least. Being seedable is also good, and the fact you can save that seed slot by downloading it with Sherman's Peak. So it's uniquely suited to OS decks that use Deep Space Station K-7. How else are you going to make use of Arne Darvin's useful special skill? OS Klingons aren't enough to sustain a deck by themselves, so marrying them to the OS Feds like this makes sense. The Romulans are fewer still, but aren't covered by this Treaty unfortunately. If you wanted to use them, the tri-Treaty would probably be called for instead. The Treaty DOES cover Mirror OS personnel however, and they're actually closer to OS Klingons even if you can't report them to same way. Decks that use support from non-OS sources shouldn't use this Treaty, because such support would come under house arrest fairly frequently. The tight focus means it's still good at 3.4.