Who's This? A brother/sister hacker team. 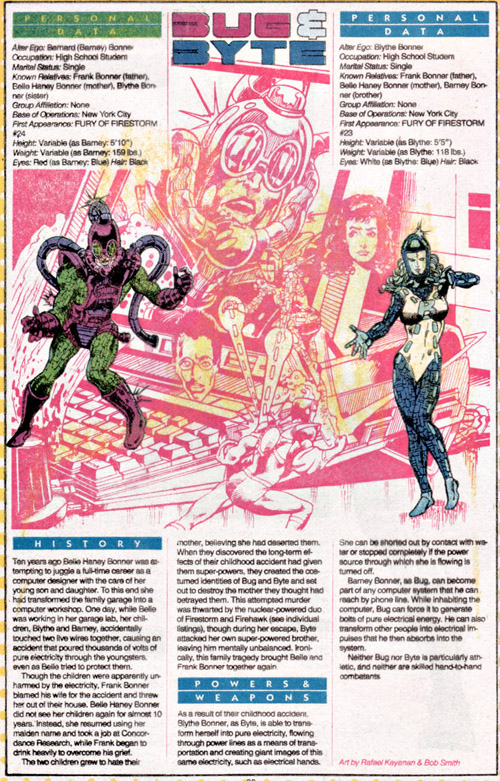 The facts: They only have a single story, really. Bug and Byte first appeared in Fury of Firestorm #23-24, and the only ever in large groups of villains and only much later. Play Where's Waldo for them in Young Justice #50-51, Infinite Crisis #2 and Villains United #1 (where Blythe gets choked out by Deathstroke), for example.
How you could have heard of them: Bug and Byte appeared in the Flash TV show as a pair of robbers in the year 2049 ("Godspeed").
Example story: The Fury of Firestorm #24 (June 1984) "Terminal Velocity" by Gerry Conway, Carla Conway, and Rafael Kayanan 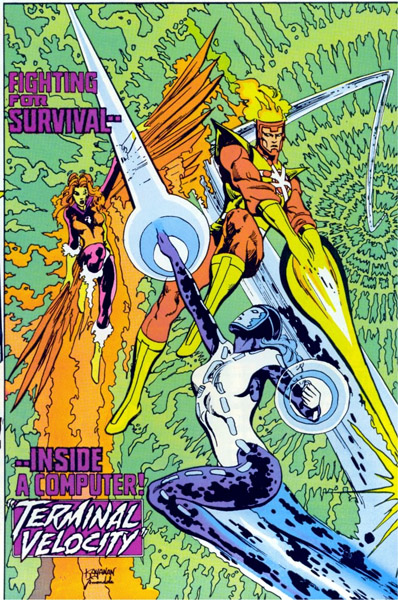 Firestorm and Firehawk are having their first play date... as themselves! Lorraine finds Ronny a little young for her (but dismisses Professor Stein as a possibility), but she's all in, investigating an attack Stein's friend Belle Haney. Ronnie's quite sure "Byte" is really his classmate Blythe Bonner, so they go to the Bonner house for answers. Blythe's brother Barney answers the door and is quick to suggest Ronnie and his new girlfriend come to his room and nerd out over his computer. Ronnie's surprised his drama coach, Mr. Bonner, is crashing on the couch, cradling a picture of Belle. Looks like everybody knows everybody. More peculiar still is the fact Barney's room looks like a sci-fi computer lab. 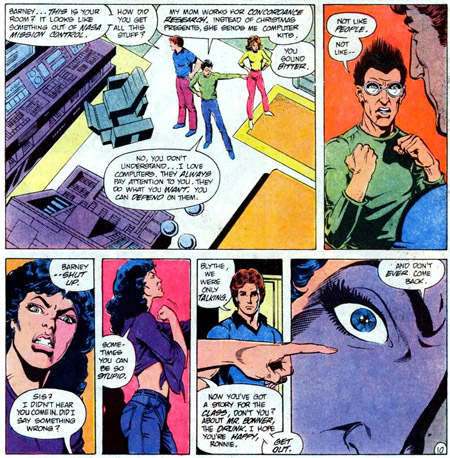 The absent mom has been sending him high-tech computer parts, and also, Barney's a bit of a misanthrope for someone so welcoming. Blythe comes in before he can incriminate himself and kicks everyone out. Issues! Professor Stein isn't too convinced Belle is necessarily the Bonners' mother, but when Firestorm confronts her, she admits they are, and tells her sad, tragic story. 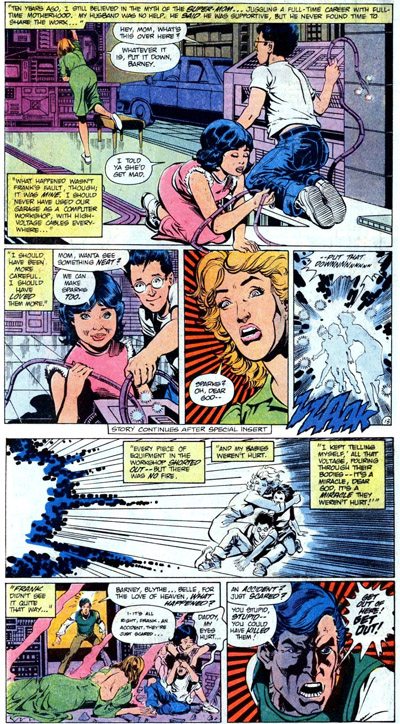 You know how it is. Working mom brings kids to work. There's a lab accident. Husband throws mom out. Kids develop super-powers and a psychotic need to kill deadbeat mom. And here they are now! 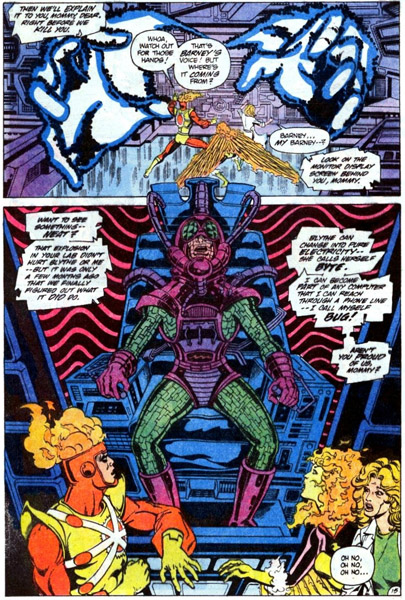 Bug getting to other computers on a phone line really dates the story, doesn't it? But very high tech for 1984! I can't believe he's not a more major concern today, because he could essentially reach anyone and anything. The electric hands belong to Byte, who in a way's been replaced in the DCU by Live Wire, a Superman villain. 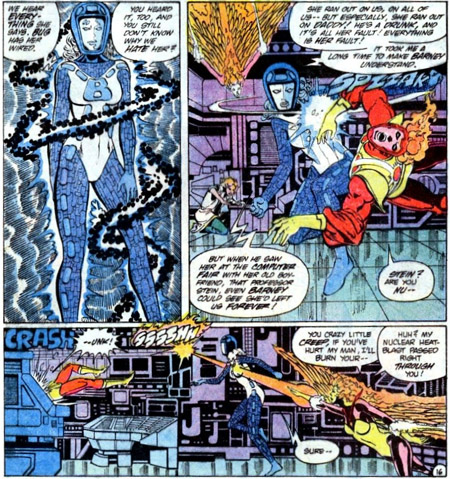 When Byte zaps her mom, she turns into electricity too, and off they both go into the computer screen. Well, she WAS at that accident TOO.

Now I'm not exactly sure HOW they do this, but Firehawk's nuclear powers and Firestorm's ability to change his atomic structure, allow them to follow the villains into the Internet, Hackers-style. But they find themselves at the mercy of Bug's electron streams. Together, they bounce Bug off the system. 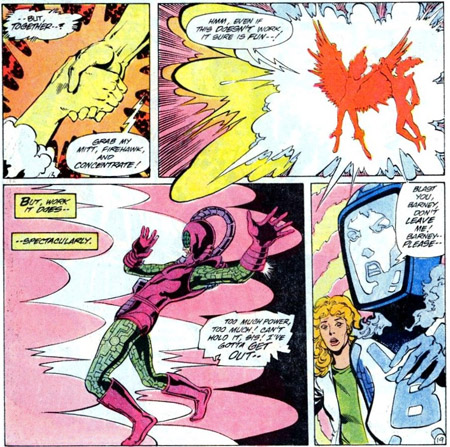 He's PHYSICALLY thrown out, so it's more than plugging in. Like his sister, he can turn into a signal. The Nuclear duo continues to fight Byte in a surreal electronic space, but she escapes back to their house where she threatens to shut the computer off and thus kill the heroes. If you say so, 1984 comic. Barney thinks that's going too far and turns on his sister. 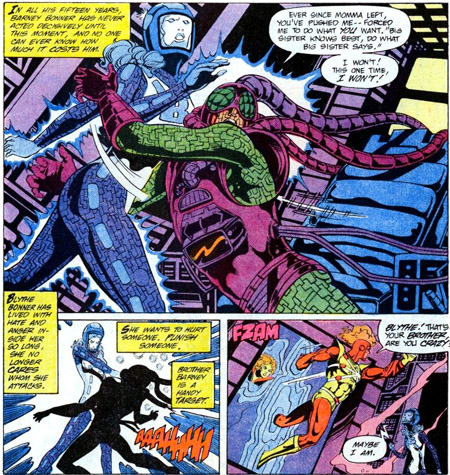 He's not dead, but badly hurt, and he feebly asks his dad if mommy can come home now. And Byte? 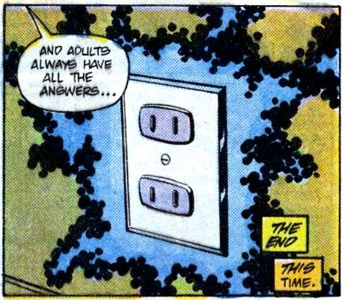 We're promised an encore, but if Gerry Conway had plans for Bug & Byte, they'd never come to fruition even though he was on the book another two years. That's too bad, because I always thought they had a cool look (Kayanan is really kicking ass in this issue) and their concept becomes from relevant with time, not less. Of course, at this point, the computer science is really goofy, but it could only get better. No one really took up the challenge.

Who's Next? The man who makes funny animals.
Comics Who's This?