Who's the Bug-Eyed Bandit?

Who's This? A guy who likes insects. 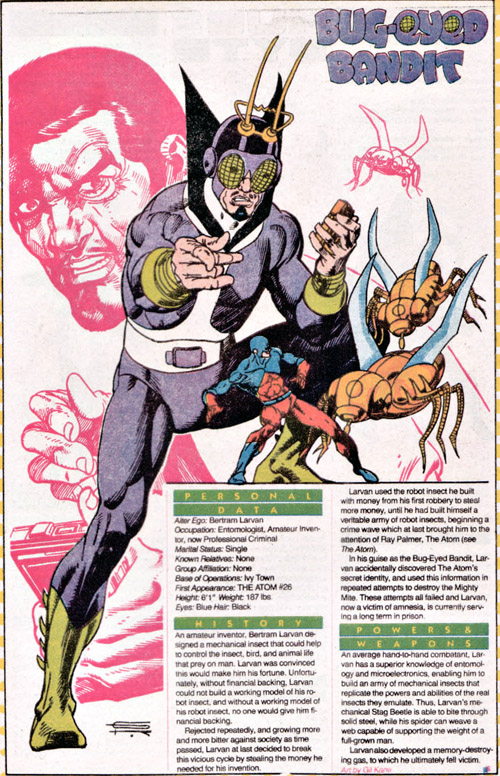 The facts: The aptly named Bertram Larvan was created by Gardner Fox and Gil Kane in 1966's August-September issue of Atom (#26) and then only two more times in Atom stories before getting himself killed in the Crisis. He nevertheless appeared a few times, usually as a joke, in later books. Mayfair Games' DC Heroes role-playing game also featured him as an opening villain in its module The Doomsday Program, which I wouldn't mention except it's my go-to to start a campaign and have played it three times. Bertram was succeeded by his son in that issue of Justice League America where a guy wins all the lame supervillains' gear in a poker game (#43) and then in a few unconnected stories in the early 2000s.
How you could have heard of him: He appeared a couple times in The Brave and the Bold cartoon (of course) and was transformed into BRIE Larvan (haha) in the Flash TV show, which may have inspired the Flash series of the last few years to feature him (as of The Flash vol. 5 #36), though mostly as a background character (in Iron Heights, for example).
Example story: World's Finest Comics #260 (December 1979-January 1980) "A Tight Squeeze for the Tiny Titan!" by Bob Rozakis, Juan Ortiz and Vince Colletta 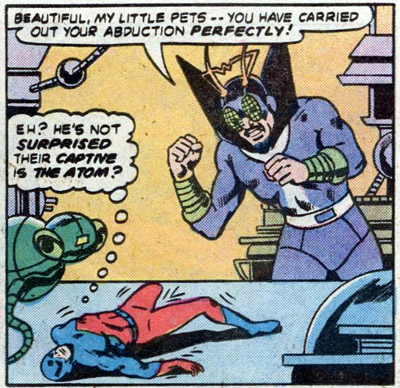 The Atom's costume seems to be malfunctioning in this story and shrinking more than Ray Palmer does. It's much too tight and makes him gasp in pain. At no point does he wonder if he's gained weight because of married life. Jean Loring is there yawning away and wants to go to bed, but he shoos her off so he can work on the suit. (We all know how this ends, don't we.) When he finally goes to bed, however... 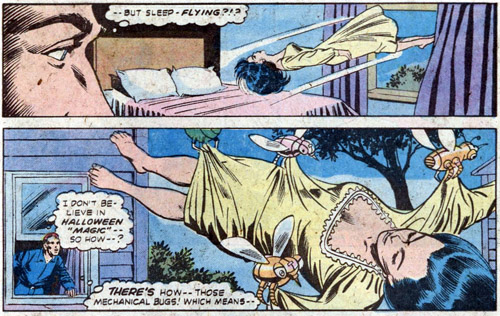 Damn it, it can only be the Bug-Eyed Bandit. So Ray's gonna have to climb into the tight suit and bear it. In his previous appearance, he had learned of the Atom's secret identity, but forgot it after getting a whiff of his own amnesia gas. His abduction of Jean can only mean he's remembered! Ray rescues Jean (who never wakes up) and takes her place. 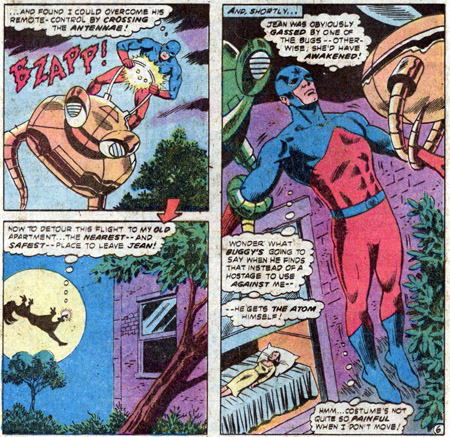 But that was the plan all along, mwah-ha-ha! But while he knew to attack the Palmer household, he still doesn't know Ray Palmer is under the mask?! Well seems Ray put a tiny bit of white dark matter in her wedding ring and that's what the bugs were tracking.

Am I the only one giving Larvan a French accent? I think my brain is processing him as Batroc the Leaper. Anyway, the Atom wasn't gassed so he wakes up and quickly gets rid of Buggy's remote control. The robot insects swarm haphazardly and smash his beetle farm. 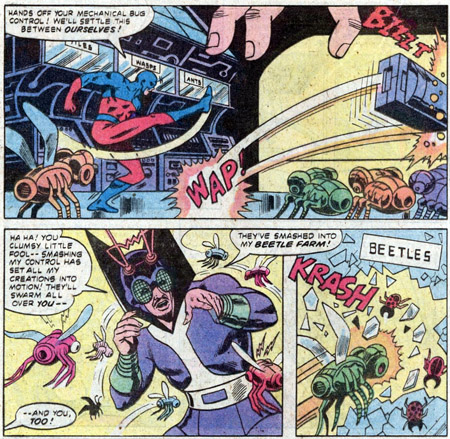 You'd think he'd have put all the controls in his helmet by now. Just seems like shoddy supervillain work. He shouts at them to stay away, that he is their "master", while the Atom fights an escaped ox beetle and his ever shrinking pants. Let's just say one of these two men is done with their struggle first.

Not a great showing. And the "answer" Ray alludes to? Well, since the bugs were tracking white dwarf matter and his costume should have the most of it, they should have come for it, not for her. In other words, the DSM has faded from the Atom's threads causing unequal size-shifts (but you'd think they would shrink LESS and get BAGGY, maybe I should send that question to the Answer Man).

With only a couple of Silver Age appearances, the Bug-Eyed Bandit wasn't a shoe-in for a Who's Who entry, but this Bronze Age sequel might have sealed the deal and reminded people he exists. "Exists" yes, but ongoing concern? Never. Truly incompetent.

Who's Next? A brother/sister hacker team.
Atom Comics Who's This?