Who's This? The man who makes funny animals. 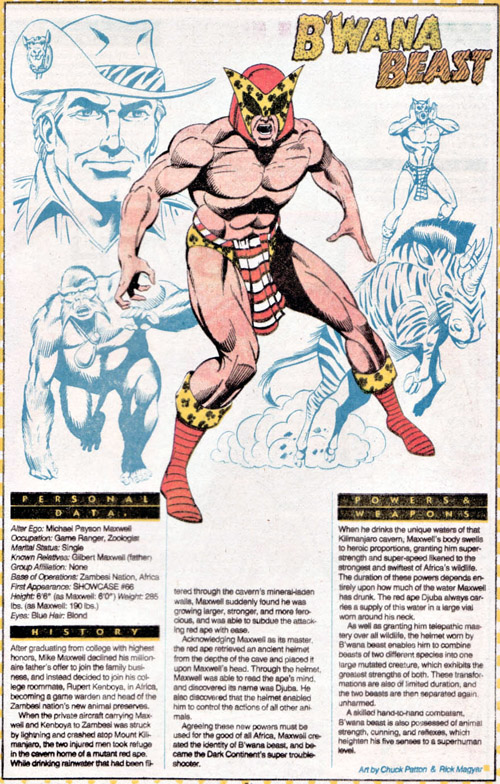 The facts: Tarzan with weird powers, B'Wana Beast first appeared in a short run of Showcase in 1967 (#66-67), and aside from showing up briefly in a Swamp Thing Annual in '87, not really until Animal Man #1 in 1988, where he gave the mantle to a black hero named Freedom Beast. Michael Maxwell would return later in the series as an antagonist, corrupted by a malign force; he's killed at the end of that storyline.
How you could have heard of him: If people know him at all, it's because of his appearances on The Brave and the Bold animated series (where he certainly belongs, if anywhere). He did apply for JLI membership in the New52, but was rejected.
Example story: Showcase #66 (January-February 1967) "The Birth of B'Wana Beast" by Bob Haney, Mike Sekowsky and George Roussos 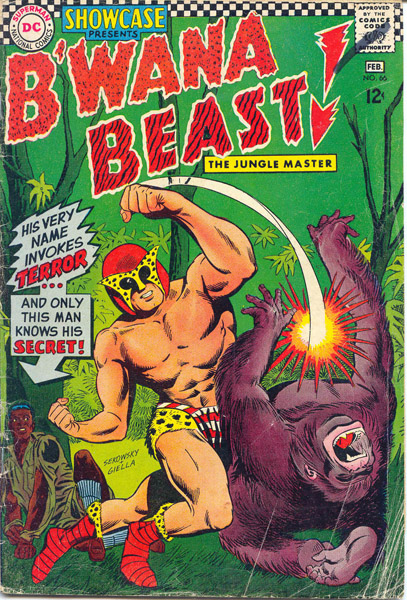 Though he's gonna turn out to have much stranger powers than anyone might expect (Bob Haney isn't overtly credited), the splash page essentially makes you think he's a slightly comic-booked Tarzan, complete with trademark jungle cry. But Rupert Kenboya's address to the reader also sets up an intriguing relationship... if the comic can maintain it. 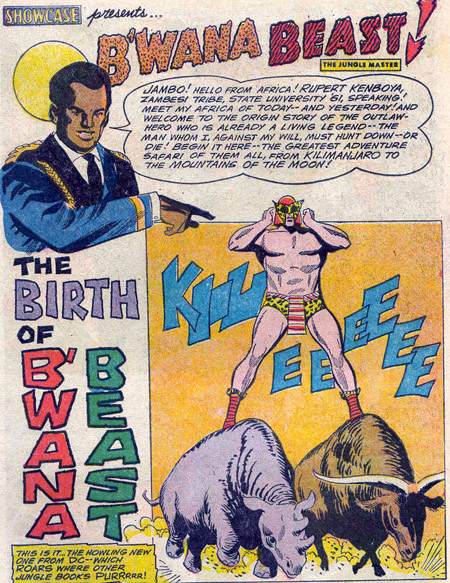 As the story opens, we properly meet Kenboya, educated at Harvard, new police commissioner to the nation, returning to his home village where the people are exploiting their own resources(?), a copper mine. But the village's witch doctor warns of danger, and young Kenboya won't listen. He's been Westernized too much. Cut to Ranger Mike tracking a purplish gorilla in the Zambesi nature preserve...

...Let's have an aside at this point to talk about whether or not the B'Wana Beast strip is racist or not. Artist Mike Sekowski apparently thought so because he reportedly refused to draw any more after the second issue on those grounds. If it is, at this point (p.4), it's that 1) it's going to have a White Messiah hero, and 2) Africa is "generic", with what the uneducated and untraveled reader might expect from the continent. The proof is that you'd expect the Zambesi people and preserve to be close to the Zambesi River, but if it is, there's no way it's in spitting distance of Mount Kilimanjaro as pictured here. Africa as a tiny island where everything you know is close. We're in Jumanji. End aside... 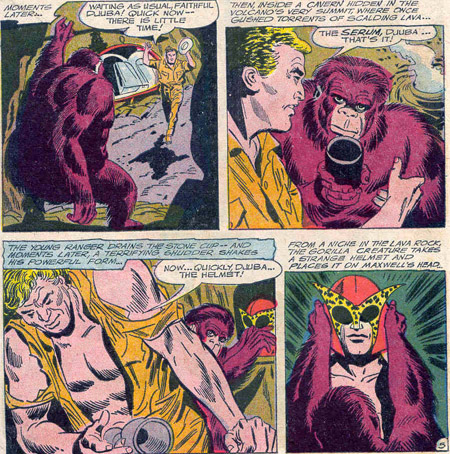 So Ranger Mike takes a serum that make him hulk out - dude, take the shirt off before you do it, those things cost money - and there's a mystical helmet involved. Bye, Djuba, I'm needed. But ki-ki-kuuuueeee, needed for what?

To disrupt local mining operations and steal some ore, apparently. So that's why the cops are after him. But now enters He Who Never Dies, a ghostly figure who projects illusions of himself and also drives a funky dragon tank: 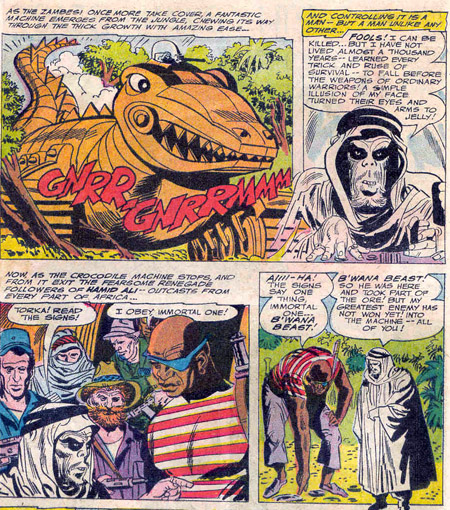 And he's destroying trucks and dumping ore too. It's the Silver Age, we're going to have to wait for last-minute exposition. In the meantime, let's just skip to the hero and villain meeting in the open desert (because Africa fits in a football field) and B'Wana Beast showcasing his most interesting power: combining animals! 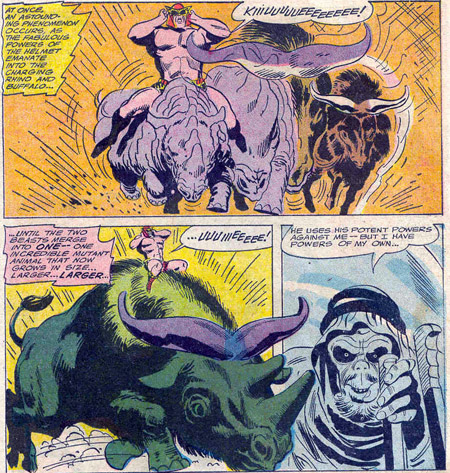 What can defeat a dragon tank? How about a rhino + an elephant + a water buffalo? Just don't ask why the resulting amalgam is green! Speaking of coloring problems, Haney decides the middle of the fight is a good time to flash back to the connection between Ranger Mike and Kenboya, but the art can't tell which is which! 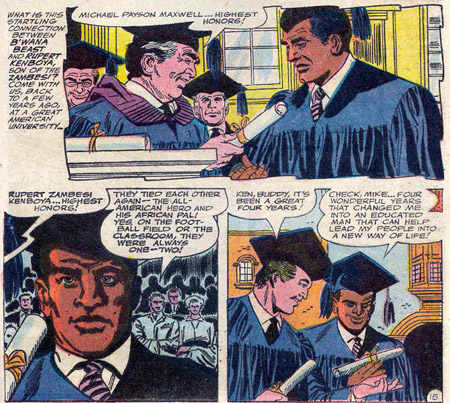 Point is, they both graduated from Harvard with highest honors. Mike didn't want to go into the family business so Kenboya offered him a job as game ranger in his country, "head of all our new national animal preserves". With his degree in zoology and suggested daddy issues, Mike jumped at the chance. This college yearbook story turns into a superhero origin however when their plane crashes on Kilimanjaro. It's Kenboya who drags Mike from the flaming wreckage and fights the purple ape to keep his friend safe. So why isn't HE B'Wana Beast?

Well, you know when you're in a cave, trying to wake your friend up and you see a cup full of rain water and you feed it to him? And that water is actually a magical potion? Yeah, that. So Mike wakes up all buff and stuff, and wrestles the gorilla into submission. The gorilla next sticks a helmet on him that gives him telepathic power over the animals. The two friends agree to keep the secret and Mike will use these powers on occasion to help the Zambesi. So what the heck is happening?! I know I promised Silver Age answers, but it seems I won't get them. To be continued! Oh no!  Oh well.

The issue actually ends on a text piece entitled "B'Wana Beast's Real Africa", which takes some balls, honestly. Its education content includes the fact that it's the largest continent, despite it seeming extremely small in the story. Writing about a place you've never been to is a touchy proposition, and I'm sure Kenboya scolding his people about their superstitions - when there's a mystically-powered superhero RIGHT THERE - would have gotten more than insensitive over time. "B'Wana", a term meaning "Master", here means he's called "Beast Master" probably, but since it has strong colonial connotations, it too is a problem for current-day readers. Somehow, it didn't stop him showing up a couple time on a current-day cartoon. Maybe it works because he's so silly there. But look, who doesn't like a cool animal mash-up?

Who's Next? A Thanagarian shape-shifter.
Comics Silver Age Who's This?