"Used to be a thousand people jammed in a stadium - now this." 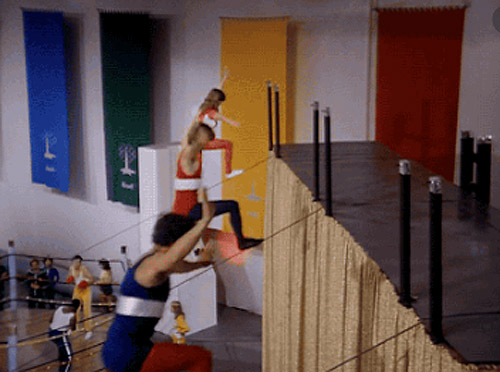 REVIEW: Part of the fun of this one is seeing how sports evolved and changed, in particular with all the power sets that have developed in humanity living on other planets. We know they lost football, baseball and ping pong (so probably tennis too) from the fish-out-of-water gags they've done on the show, so I was expecting mostly decathlon stuff (they actually still have the pommel horse as is). The show's on a budget, so every even seems to take place in the same large gymnasium, and concurrently, with cheers being piped in from all over the galaxy. You have to make concessions. I like the line gliding event, the high jumping is insane (nobody sticks the landing), but sonic boxing and telekinetic judo are truly silly. Weightlifting making use of artificial gravity is a likely adaptation to mega-strong individuals, and the crucial sport of AstroSlalom - the sci-fi equivalent of bobsled - makes sense given the technology of the time, but looks kinda cool too. At least we can rest easy knowing that sports journalism hasn't changed at all.

That's the setting, but the plot itself is right out of the Mission Impossible handbook. Two athletes, Jorex and Lara, have become lovers, but they are star-crossed because Jorex lives in an oppressive regime. He wants to defect, but he's saddled with a brain implant that's used to control him with pain, and capable of exploding if he tries to escape. The episode is actually pretty unusual in its structure, as we stay with these two characters for an inordinate of time before even catching a glimpse of Buck and friends. Obviously, they'll get involved and mount a mission to smuggle Jorex out of there on Lara's astrosled, trying to outrace the signal from evil handler Alaric, which at one point, Wilma must seduce dressed as a prostitute. She needs a platinum blond wig to complete her disguise, as I see Erin Gray has been getting darker (reportedly out of fear the constant bleaching would damage her hair). Not that a lady of the night can't be a brunette, but it does put us in mind of Barabara Bain's character on M:I. So while the show does its usual thing of escapes, reversals, and plans gone awry (a lot of episodes would be much shorter if the heroes succeeded with their initial ploys), it's a pleasant runaround. Buck gets to escape an unusual death trap by reflecting laser prison bars to their control box, and they make it to a stargate in a nick of time. If you're playing the blue ball drinking game we've set up, check out the scene where Lara takes Buck in her sled and seduces him before telling him to please help her boyfriend and finish that drink.

It has to be said the spy craft is rather weak because of production considerations. Alaric has exactly ONE man under him and together they can't quite keep tabs on their ONE star athlete. Sometimes Jorex is punished for talking to outsiders, and other times he has time to make extensive plans with Buck and Lara while in the same open, brightly-lit space we know can be seen from Alaric's viewer. Maybe the Deputy Minister has more athletes to keep an eye on, and maybe there are limits to the number of attendees, but the dialog can't confirm. We do have to suspend disbelief on that score, but no wonder Alaric commits suicide at the end (a bloodless affair - he explodes his ship - but pretty shocking for this show). The one problem I can't quite forgive is the whole thing about this planet's steroids having some aphrodisiac effect. They use it as an excuse for Wilma's hooker persona to crash Alaric's pad, yet she's really unaffected and it's not clear why that character would be taking the steroids. At the same time, it makes you question whether Lara and Jorex are really in love or if he's manipulating her for his own ends, which isn't what's happening. Was this orphaned from an earlier version of the script?

And I haven't mentioned it, but I HAVE been noticing it... Buck's cheesy trademark thumbs up now seems to be something he HAS to do every episode, and you can almost see Gil Gerard gritting his teeth when he does it. Back to the drinking game, you at least need to take a nip each time.

SPACE DISCO: A product of its time, Olympiad was no doubt meant to tie into NBC's coverage of the 1980 Olympics in Moscow, with all the Cold War intrigue that evokes, but the ailing network got the shaft when the U.S. boycotted the event in protest for the USSR's actions in Afghanistan.

STAR GAZING: Judith Chapman (Lara) was just at the start of her career and would also be used on Galactica 1980's one good episode, "The Return of Starbuck". Ultimately, she became a major soap star, still a regular on The Young and the Restless. Paul Mantee (henchman Karl) became a regular on Cagney & Lacey, but toiled for decades as a western, spy and crime show guest star. Similarly, Nicolas Coster (Alaric) is a very recognizable face from TV. While many of the athletes we see are stuntpeople who regularly worked on the show, you can also spot Elgin Baylor of the L.A. Lakers;Thomas "Hollywood" Henderson of the 1972 Olympic basketball team, then the Dallas Cowboys; and professional boxer Jerry Quarry.

ALL THIS HAS HAPPENED BEFORE: The sonic boxing gloves make the exact same sound as Battlestar Galactica Vipers. Our two lovers are named after Superman's parents Jor-El and Lara (whose name is alternatively pronounced Lah-ra, Laura, Leh-ra and Larva). The footage showing the force fields on the AstroSlalom course comes from the opening credits sequence of the short-lived Logan's Run TV series from a few years before.

REWATCHABILITY: Medium-High - Yeah, Buck's been on rescue missions before, but this one has a fresh and fun setting that makes it feel different.
Buck Rogers

Anonymous said…
I think I vaguely remember this episode (Wilma's hooker outfit is certainly hard to forget). Didn't the USA boycott the 1980 Olympics? Maybe this show was meant to be a political statement of some kind.

I was actually thinking Jorex might use his super-leaping ability to get out of there; wasn't there a real-life athlete who pole vaulted over the Berlin Wall or something?

Anonymous said…
1. Oh, I guess I wasn't paying close enough attention ... sorry. (I hate disco, so I sometimes gloss over that section.)

2. Upon further inquiry, it looks like I was getting real life confused with a movie: https://en.wikipedia.org/wiki/The_Wicked_Dreams_of_Paula_Schultz

Siskoid said…
The section is more about placing the show in the time it aired than the disco aesthetic.
September 29, 2021 at 9:11 PM