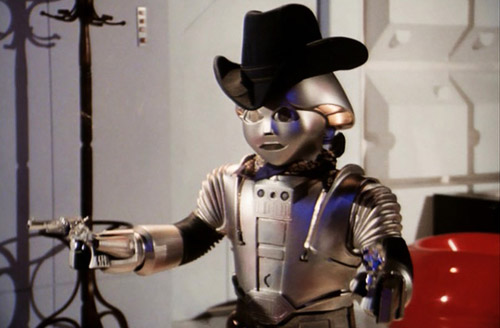 WHAT'S UP, BUCK?: Buck is the Chosen One prophesied to end a tyrant's rule.

REVIEW: Though the Katari are more sympathetic than the Koven, this is another instance of a planet tricking Buck into helping them when asking would have been easier and probably more effective. What is it with people in the 25th Century?! They've been subjugated for generations by a dynasty of warlords, the leader of which calls himself the Trebor, who steals their women and kills their warriors for fun, and they have a prophecy about a 500-year-old man freeing them from tyranny. Buck seems to fit the bill, and the script goes to extremes trying to say it's not real, but so long as the people believe it, it's a powerful symbol, even though they're proven right because Buck does exactly that. Look, either Destiny exists or it doesn't, but the show doesn't manage to have it both ways.

The result is quite dull actually. The Katari turn out to be benign, so it's not a big dilemma to help them out. The "people" won't rise up, but the ministers of state are happy to form an infiltration squad and fairly easily rescue the girls from the harem. Even when Buck is captured, he's in and out of there, no real trouble. The Trebor wins his fights by cheating, using an electric implant, and that final duel, for some reason staged in a storage hanger where "the people" can't see it, really hinges on Twiki doing something that sends feedback to the villain and fries his systems. Still Buck struggles with his grappling technique, but Buck Fu triumphs in the end, as per the prophecy. Buck then gives a speech to a TV screen showing a matte painting and whatever, we're done. When the most memorable image from an episode is the tag with Cowboy Twiki, you know you've failed.

Much of the energy is drained from the episode by the bad acting. Elizabeth Stack as one of the minister's daughters is particularly terrible, just wretched and hyper-melodramatic, and she's the one who has to throw herself at Buck (I think she thinks they're married after that gift exchange). Her sister Maya isn't much better. Stephanie Blackmore as Greta, the Trebor's older, wiser wife(?) is the best female actor here and completely wasted on a role I had to put a question mark next to because it was so ill-defined. Universal just plugging in contract players with nothing to do, or what?

But here's my biggest beef with Duel. There's just no way 25th-Centurians wouldn't know what an "egg" is even if they didn't eat chicken eggs. The word has too many meanings! Worse, they don't know about electricity. Look, even if the future is pumping raw energy into star fighters, we've seen too many circuits sparking at this point. Whatever your power source, you're essentially using it to "make" electricity. And even if you didn't, all these eggheads (there's that word again) don't understand a BASIC PRINCIPLE of physics? It's completely absurd AND unnecessary. It's essentially used to make the Katari people afraid of the Trebor's "magical" powers (even though we've seen a lot of psychokinetics with similar powers - actually, what we see is closer to that than "lightning blasts"), they only need to be unaware of the possibility of cybernetic implants, or just not know how to defeat it. This is an instance of having Buck's past knowledge be useful that defies belief. But check out my descendant Dr. Albert, a crackpot historian who knows all the answers but it still fated to dig through pop culture trash for the rest of his life (so it's genetic).

SPACE DISCO: While Dr. Albert is talking to Wilma, he picks up a 1978 Aladdin "18 Wheeler" lunchbox, and stares at a Newton's Cradle, which had become a popular executive toy by 1980. Buck refers to the Trebor as a "Shogun", no doubt because people who remember the Richard Chamberlin mini-series from less than 2 years before. The Trebor has disco musak playing in his harem chamber. Buck wears a white leisure suit and is given a medallion as a love token.

STAR GAZING: William Smith (The Trebor) would soon get to play Conan's dad in the Arnold film, but at the time, was Kimo on Hawaii Five-O. Keith Andes (elder minister Darius) retired the year he was in Buck Rogers, but had been working since the 40s; for readers of this blog, we'll simply mention Akuta in Star Trek's "The Apple" and the voice of Birdman. Elizabeth Stack (Vionne) didn't have much of a career (as I could have predicted) so remains best known for being Robert Stack's daughter. Stephanie Blackmore (Greta) wound up on Dallas in due course, while Heidi Bohay (Maya) became a regular on Hotel with James Brolin, the rich man's Gil Gerard.

ALL THIS HAS HAPPENED BEFORE: The shuttle that is seen leaving the Trebor's palace is the same type of shuttle used in Battlestar Galactica. The Katari cityscape is a combination of matte paintings and photographs of architect Kisho Kurokawa's iconic "Takara Beautilion" Pavilion at Expo '70 in Osaka (makes a change from consistently using the Montreal Expo).

Mike W. said…
Yeah, if they still have thunderstorms you'd think they'd know what electricity is. I thought Greta was interesting too (and pretty attractive), so maybe they should've had her take a shot at Buck, just to spice things up a bit. The biggest eye-roll for me was when the Katari knew about the "secret" tunnels under Trabor's hideout; how'd they get that info, and why hadn't they used it to rescue their people earlier?

I was trying to figure out what lunch box that was; I thought it might've been a Buck Rogers one (or Star Trek), but I suppose that would've been too meta. I didn't even recognize Heidi Bohay, but I do remember her on Hotel. I think her acting was better by that point.
October 20, 2021 at 3:26 PM

LondonKdS said…
I wouldn't be able to watch this episode without giggling, because Trebor is a well-known British candy brand.
November 19, 2021 at 2:11 PM