Category: Poll
Last article published: 7 December 2009
This is the 6th post under this label 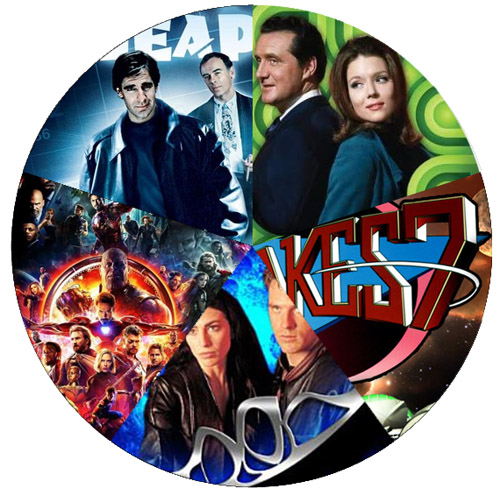 Though the truth is I finished writing my Buck Rogers reviews during the summer, it's gonna take until the start of the new year to finish publishing them. What's the NEXT series I should undertake to watch or rewatch in its entirety, reviewing each installment as I go? That's where you come in!

I've finessed it down to five choices, and top vote-getter (in the comments) will be given priority. Let's meet our contestants!

Not Marvel's (see below), but the spy show from the 60s (as well as the New Avengers from the 70s, and the 1998 movie). My Avengers are Steed and Mrs. Peel, so there's all the other agents to discover - not that I've seen the episodes with my favorite duo since I was a kid. Pros: A change of pace, since all the other stuff is sci-fi and this is only borderline sf. Cons: Not all Season 1 episodes have survived, but even so, I may have to invest in some DVDs as I don't have the complete series yet.

Blake's 7
I've never seen it and it's finally available in Canada. This sort-of cousin to Doctor Who is one of British TV's most heralded science-fiction classics, about "a group of convicts and outcasts fight a guerrilla war against the totalitarian Terran Federation from a highly advanced alien spaceship". Pros: The Doctor Who connections. At 52 episodes, it'll take exactly a year. Cons: Is it interesting enough for the world at large?

Farscape
I've only seen a couple of episodes here and there, but a very low proportion of this colorful turn-of-the-millennium series. At 4 seasons and 88 episodes, it's a sizable investment, but a lot of people have recommended it to me over the years. Pros: It has a similar inciting premise as Buck Rogers and would follow it smoothly. Cons: What if Amazon Prime pulls it out of circulation before I get to the end?

The MCU
One of two very long projects proposed on this list, but a big one, this would entail watching every single piece of the Marvel Cinematic Universe, including the Netflix shows, Agents of SHIELD, Cloak and Dagger, even the Inhumans, in addition to the movies and their more obvious spin-offs. And it's still going strong. Pros: Really popular and could be cool to see what outlying puzzle pieces are worth checking out (or throwing out). Cons: Iron Fist. Inhumans. Long waits between movie reviews as I get through seasons of television. And what happens when the Multiverse starts including OTHER Marvel movies/shows?

Quantum Leap
When I was thinking of what series to REvisit, Quantum Leap immediately came to mind. I might even throw in some of the tie-in novels since I bought a few in a used book store a few years ago and haven't made myself read them. Oh and the comics series too. At 97 episodes, it's almost two years of reviews of a beloved show. Pros: Reader demographic's sweet spot. Cons: Do I remember them too well to truly enjoy a rewatch?

Pros and cons aside, I wouldn't have put any of them here if I wasn't ready to commit to them, so take the arguments for what they're worth and vote in the comments section! I'll announce the winner right here in the post and on social media, and we'll see what we can do to start work on 2022 articles!

daft said…
Not necessarily a vote, but it would seem sensible to approach Quantum Leap next. I think you would enjoy the 1st reasonably taut series of Blake's 7, but the concept starts to go seriously downhill from there, apart from the iconic final episode that is. Along with The Avengers, I don't think there would actually be a lot of narrative elements to tease out, as it were.
October 25, 2021 at 6:28 AM

tomg said…
Farscape is my first choice followed closely by the Avengers. I am only familiar with the Mrs Peel years and I am very interested in the other characters.

I watched Blake's Seven as a kid in the US. I remember loving it until it underwent some cast changes. I stopped watching it after that. I would be curious to read about it I remeber very little.
October 25, 2021 at 7:28 AM

As for your warnings, I was told the same thing about doing Doctor Who episode by episode rather than serial by serial and those fears were unwarranted.
October 25, 2021 at 8:29 AM

Radagast said…
Farscape is my first choice, followed by the MCU. But they all look like great choices.
October 25, 2021 at 8:49 AM

Siskoid said…
You're right, I'm more of a DC person, though I was probably more of a Marvel person in the 80s as a teenager. And I mean, I do have a podcast dedicated to Marvel characters.
October 25, 2021 at 10:48 AM

Kurt "Welcome to Geektown" Onstad said…
Quantum Leap would definitely be my first choice. I considered doing a podcast of the show (like Star Trek: the Next Conversation or West Wing Weekly) before I landed on the Q&A format instead.
October 25, 2021 at 2:35 PM

Siskoid said…
Xena would mean doing Hercules the Legendary Journeys as well, and I'm just not into giving Kevin Sorbo that big of a boost.
October 25, 2021 at 3:31 PM

Allen W. Wright said…
Well, personally I'd be fascinated by what you think of Blake's 7, especially as it's an influence on other shows including Farscape.

Second choices would be the Avengers (non-MCU kind) and Quantum Leap. I'd be curious to think if you think Quantum Leap still holds up. There are certainly some episodes / scenes lodged in my memory.
October 25, 2021 at 4:13 PM

Siskoid said…
Cory is a traitor to his kind.

Green Luthor said…
My first choice vote would have to go to Quantum Leap. (Second place would probably be Farscape, then the MCU. Alas, I haven't ever watched The Avengers or Blake's 7.)
October 25, 2021 at 7:05 PM

While it had its share of sci-fi tropes, the overall direction was wildly different than what had been offered before... or since!

Avon is one of the greatest characters ever, BTW. Add in Servalan and...

Charles Izemie said…
I'm currently wading my way through UK science fiction series at a snail's pace – at the moment I'm in 1964, having just started Stingray and about to enter the second series of Doctor Who. This of course means that I've seen the first three series of The Avengers (if by "seeing" we understand the short recons of the missing episodes – I haven't heard the Big Finish audio recreations), but Blake's 7 is years away. Doesn't matter, your opinion will be good to see then, but obviously I can't comment much.

I haven't seen most of the MCU films (not terribly interested, I'm afraid), watched all of Quantum Leap a few years ago and it's still fresh on my mind, and only just started Farscape (three episodes in!).

I will of course read any of your reviews with great interest, but I think you put it yourself best when you said that Farscape would be a rather natural thematic followup and offers good chances for loads of cross- and meta-commentary.

Jeremy Patrick said…
MCU! I've been doing a complete watch, which has lasted a long time (there's a perhaps-surprising amount of content once you add in all the Agents of SHIELD, the Netflix series, etc.). I'm into the second season of Cloak and Dagger, and it's been a really fun experience.

Andrew said…
I'm voting Blake's 7, because it'd be fun to hop across the Atlantic for another run.

LiamKav said…
I kinda suspect that if you did the MCU, you'd hit the same problem you did with the DCAU. I listen to podcasts from people who are big fans of the movies and pretty much all of them gave up on the older TV shows pretty quickly.
October 27, 2021 at 6:52 AM

Jeff R. said…
So, not ready to commit to spending the next decade watching Stargate? :)

LismanDD said…
Blake’s 7 or the Avengers would be most interesting to me, but I’d be fascinated to read your take on any of these shows except for the MCU (of which I’m just sick to death).
November 7, 2021 at 5:31 PM