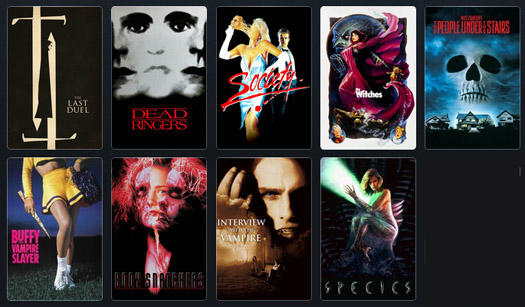 In theaters: How do you do a topical story essentially about the Kavanaugh confirmation to the Supreme Court, but set it in 14th-Century France? Ridley Scott offers The Last Duel, our second take-down of the chivalric code this year (after The Green Knight), based on actual events in the court of Charles VI. The more things change... Scott has been doing movies about rape since Alien, but there's a Rashomon twist here that only subtly changes intersecting scenes between the two vain knights/squires and the lady wronged by one (or perhaps both) of them. Not that this is a subtle film in terms of its messaging. But though the variations on events are relatively slight, they do create suspense as to what the ultimate truth will be. Surprisingly funny thanks to the aristocrats in this, Ben Affleck's Count in particular. These dilettantes are above the petty concerns of their knights and squires and take none of it very seriously, and are rightly ridiculed as well as condemned. As for the duel itself, it's worth the wait. I felt every blow and squirmed in my seat. Also have to say that between this and Free Guy, that's quite the range on Jodie Comer who is blazingly good in this.

50 Years of Horror/1988: Though the characters only really enter a Cronenbergian parallel reality in the third act when those... instruments... are commissioned, Dead Ringers is a creepfest from the beginning. It just plays on more subtle elements than traditional horror fare. Some people are creeped out by identical twins, and there's some of that here, paying off with the idea that two brothers share the same women without telling them. That they're gynecologists could make both genders squirm for different reasons, especially once one of them goes off the deep end and becomes dangerous. But beyond the twinning, it's a film about co-dependent relationships and their potential toxicity. Jeremy Irons has to track two characters, dissimilar in attitude, but "synchronizing" as the story unfolds, the more timid one trying to break the bond and suffering a breakdown in identity as a result. If he only sees mutant women, it's that he's part of a singular genetic ecosystem where everyone else is an "other", so could he really ever leave it? Self-actualization in this case leads to madness and tragedy.
Also from that year: Elvira Mistress of the Dark, The Lair of the White Worm, Child's Play

1989: When a movie has a credit upfront for "surrealistic make-up effects", you perk up. Society starts out as a mysterious body snatchers riff set around high schoolers and their parents in elitist Beverly Hills - standard 80s fare - with one family's daughter about to make her "debut", and her out-of-the-loop brother suffering from paranoid hallucinations maybe. Only in the third act is the complete truth revealed (well, not complete, I still have some outstanding questions), and where Screaming Mad George's demented effects take over. Society features some of the craziest prosthetic make-ups ever put to film, an orgy of monstrous flesh that nevertheless feels true to what we imagine the Top 1% are up to, give or take the shape-changing. I don't know why more people don't talk about this one, but it's probably the lackluster title. All the little Fangorians out there should treat themselves to that finale.
Also from that year: Tetsuo the Iron Man, Parents, Shocker

1990: The Witches proves than Jim Henson minus the Muppets equals Scaring the Children. After being told stories about witches by his grandmother, young Luke finds himself at a conventum of the ghastly creatures (led by Anjelica Huston, has there ever been more perfect casting?) and it's up to him and his granny to stop their plot to turn Britain's children into mice. A fun mix of fairy tale and boy's own adventure (the mouse action is excellent, even if the puppets are sometimes creaky), it doesn't hold off from showing a little bit of blood while still remaining within the bounds of a family film. It's kind of surreal that Nicolas Roeg (Don't Look Now, Walkabout) directed this. When I first saw this, I was in college probably, well past the age where I might have hidden behind the sofa (as some of my younger friends say they did), so the indelible stuff for me was, like, the kid complaining about margarine on the cucumber sandwiches. I know I did that impression for years and years, and had forgotten where it came from. A great, personal surprise!
Also from that year: Tremors, Night Breed

1991: If I were to guess at Wes Craven's intentions with The People Under the Stairs, I'd say he wanted to give kids a transgressive "shh, don't tell mom I watched this" experience. It definitely plays like a kids movie, with child protagonists, cartoonish villains, and a Goonies-like adventure inside a Dutch-angled house with shades of Peter Pan... if Captain Hook were a crazy cannibal gimp. And that's where it gets transgressive. The gore, while fairly rare, is still pretty intense, too intense for the age group it seems to be pitched at and might thus never reach. As an older member of the audience, I was often frustrated with the Home Aloneness of it (especially all the shouting) and yet found many of the gags clever (the bit with the gold coins at the end, for example). Thrumming in the background is a story of gentrification and racial strife, which for adults is probably the more interesting aspect of this gonzo flick. I definitely wanted to like it more, but its crazy mix of tones didn't really work for me.
Also from that year: The Silence of the Lambs, The Addams Family

1992: It probably isn't fair to compare Buffy the Vampire Slayer The Motion Picture with the iconic TV series of the late 90s-early 2000s, but sometimes life isn't fair. The TV show ended up being funnier, more exciting and more well thought-out, sometimes as if the movie was held as an example of how not to do it. But even taken on its own, it's got problems. The pace is way off, even sluggish, particularly where action is concerned. The broad physical humor is distracting (nowhere more so than in Paul Reubens' extended death scene), and while I don't dislike Kristy Swanson's take on the character as someone actually more clever than she lets on, she nevertheless gets the dialogue of a joke book dumb blonde from a joke book (Clueless would do all of this, sans vampires, 3 years later). Rutger Hauer is wasted as a too-easily defeated main villain. You might watch it to see young stars before they got bigger, but otherwise, the joys are few and far between.
Actual best from that year: Army of Darkness, Dust Devil, Dracula, Candyman

1993: Abel Ferrara's version of (Invasion of the) Body Snatchers is more directly a remake of the 1950s original - takes place on an army base and so on - than my 1978 favorite, and struggles to replace the Cold War paranoia of the first film with something clear and distinct. A frequent problem with early 90s fare after the Soviet Union's collapse - who's our enemy now? A more subtle answer can ultimately be found in the film's character moments rather than its plot. In the teenage lead, we find a natural rebelliousness, and in the chopper pilot she falls for, the idea that soldiers repress their feelings about killing, and so on. And so the enemy is conformity, as simple as that, which of course the pod people have always been a symbol of. Or not conformity exactly, but authority figures who would force that conformity on you. But where the original movie presented a bad conformity (Communism) and a good conformity (McCarthyism) without seeing the irony, this Body Snatchers is more philosophical in approach. Much of this comes to mind after it's all over, since on the surface, it's just an alien invasion movie with interesting prosthetic effects, given an extra frisson by the participation of a young child. The brother-sister relationship is in fact a highlight. Can't top the 1978 version, but I would still rank it above the dated original.
Also from that year: Cronos, Leprechaun

1994: There's no denying the impact Anne Rice's Interview with the Vampire (book and film) had on pop culture in the 90s. You can draw a direct line from Interview to Vampire The Masquerade to tons of romantic vampire TV shows (including Buffy's, which owes more to this than its own movie debut), right on down to Twilight. What it brought to the forefront is the vampire not (just) as monster, but as empathetic point of view character. Hey, people of 1994! Get ready for a good 25 years of frou-frou vampire stuff! Though none so clearly homoerotic, I shouldn't think. As I'm a fan of neither vampire narratives nor sprawling biographies, this isn't really for me, but I still got something out of it. The plight of the child vampire is very interesting, as is how Antonio Banderas' gang manage to survive. Narration is mercifully used in small doses, and when it is, the prose offers some good images. I still find the all-star casting bizarre, mind you. And I don't know if it's the juxtaposition of frou-frou with the current day, but the ending feels very silly and out of left field.
Also from that year: In the Mouth of Madness, Mary Shelley's Frankenstein

1995: Aliens/Predator, but the monster is trying to mate with you. I'm talkin' about Species, a movie that has an incredible cast, including tiny Michelle Williams before she was a star when the alien is a young girl. Some of these acting powerhouses are strictly slumming it, like Ben Kingsley as the obligatory moron-in-charge, but Forest Whitaker's empath is an intriguing and original choice for a monster-hunting team. Sure, Natasha Henstridge isn't a great actress - she's there to get naked mostly - but we spend enough time with her that the monster is as sympathetic as the "heroes". Still, imagine this will 12-year-old Williams (without the sex angle) and you have a much more engaging alien hybrid story. The climax is really badly written, and its use of CG creature effects lets it down further, which is unfortunate. It's probably better than what you'd expect from the era, but still not better than practical prosthetics (which are cool and freaky). Replacing Henstridge with a computer game character devalues the character we got to know in the preceding film and removes any chance of an emotionally charged ending. Oh well.
Also from that year: Castle Freak, Lord of Illusions
Buffy Geekly roundup