What a Card: Ensign Gaffney

Being a look back at cards from the Star Trek CCG, and what I thought of them back when they were fresh and new... in EPISODE order. Another week, another Ensign... 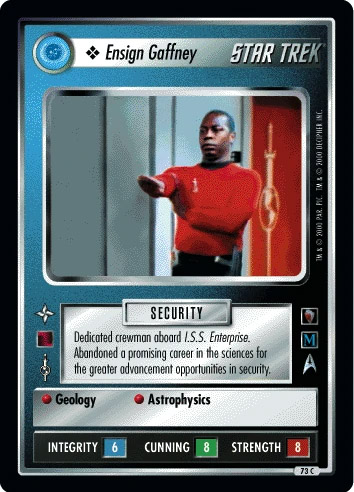 PICTURE: With Captain Kirk digitally removed from the image, Gaffney seems to be saluting to empty air, which certainly doesn't help this blurry image any. The pose is odd, especially at this angle - is he a crossing guard? - and he's really giving himself a double chin. The marks of the Terran Empire are plainly visible, which puts him in the right context, but I can't really recommend this silly effort. I kind of have affection for it, like I do Ed Wood films, but that doesn't get it over 1.7.

LORE: Ok, misses the boat on mentioning universality, but it really comes back to life in the second sentence. Not only does the lore justify the odd skill/classification combo, but also has that Mirror Universe spin. Advancement in the Alpha Quadrant seems to come to helmsmen first, not security, but here, yes. A quick descriptor like "dedicated" is always nice too, giving a touch of personality to an otherwise non-descript character. A superior 3.9.

TREK SENSE: Now a Security personnel, he used to work in the sciences. Those sciences? Apparently Geology and Astrophysics. Unrelated as they are, they paint the picture of a personnel looking for advancement here and there, switching careers easily looking for opportunities. Sounds like a Cunning way to do things in the Mirror Universe, adding to his obvious jack-of-all-trades quality to form a high attribute. His apparent bulk and Security classification qualifies him for high Strength, and his dedication makes him a candidate for relatively high Integrity. A simple design, but I'm not sure he should be relegated so easily to universality since his skill pool is on the odd side, but there may be dozens of people like him on Terran ships. Fine then, a 3.6.

STOCKABILITY: All affiliations and sub-affiliations require their own support personnel to help with mission attempts, reporting speeds, etc. Gaffney can thus help Terran decks, OS decks, and plain old Federation decks. Geology and Astrophysics are two not-so-common skills that see some action on dilemmas, and matched with SECURITY, won't be weeded out by SCIENCE hosers. For a Mirror universal, he's got pretty high attributes too. Neither of the skills are common (or even uncommon) on Federation support personnel, so his unique mix will be useful depending on your deck. He can use OS/Mirror equipment like the Dagger and Agonizer as side-bonuses, and can be used just as well with the modern Terrans as the OS kind. I'd call Gaffney a good 3.5.