What a Card: First Officer Spock

Being a look back at cards from the Star Trek CCG, and what I thought of them back when they were fresh and new... in EPISODE order. The Mirror, Mirror expansion's Ultra-Rare! 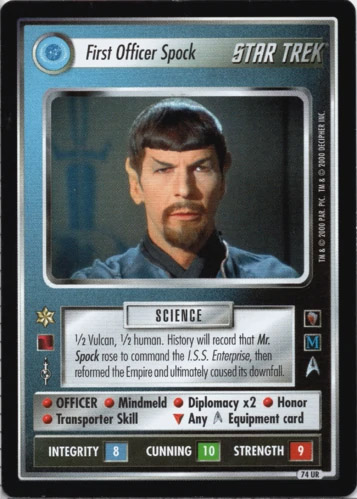 PICTURE: The bearded Spock's always been cooler than the regular Spock, so he's ahead of the game. Unlike many of the others, you don't need to see the uniform to know he's the mirror version, but what little you see of the sleeves is pretty funky. The large Terran Empire logo behind him also work wonders. It's still just a head shot, and the color palette is pretty limited. Hits around 3.6.

LORE: This whole "history will record" aspect makes this Spock's lore read as if it had been written from the DS9 era's point of view. It creates an epic sense about this ultra-rare card, but isn't in keeping with most other OS personnel lores as it looks to the character's future fate. Matching commander status adds a few decimals, so that's a 3.5.

TREK SENSE: FOS became the captain of the ISS Enterprise with the help of the Tantalus Field, so that game-related bit in the lore works even if we never saw it onscreen. The mirror Spock should look a lot like our own Mr. Spock, as the counterparts were more alike than any other character in "Mirror, Mirror" (the episode). His more ruthless universe didn't breed him to be a scientist as much, so he's only Science x1, but he's still a combination First Officer/Science officer. Mr. Spock's doubled Mindmeld is due to the many tricks he used on the show. FOS never got the chance to use these tricks in the short time we were with him, but it's not unlikely that he might be less inclined to follow mental disciplines in this harsh world. The rest of the skills are pulled from the episode itself, and don't really relate to anything on the Mr. Spock card (and that's fine). He let Kirk go and tried to reform an evil Empire, which would account for Honor. His ability to eventually sway that Empire toward a different goal would certainly require a large amount of Diplomacy (Leadership would have been too much like unreformed tactics). Finally, he was the one that used the special transporter procedure to make the switch between crews at the end: Transporter Skill. The broader a special skill or special download is, the less likely it is to have good Trek Sense, and that's a problem here. ANY OS equipment? Why? We saw him use an Agonizer and a Classic Phaser, but that's about it. No doubt, a science officer would use a Classic Tricorder, and both can be used by Science personnel. Communicators? Sure... Ok, ok, I guess that broad range works out, but it would work out on countless other personnel from the same era, so it doesn't particularly DEFINE First Officer Spock. Attributes are exactly the same as our own Spock, which is perhaps a little odd. I know they were very similar, but I don't think it would have been off base to give him a little less Integrity (even if Kirk called him a "man of integrity"), or even a little more Strength (glass skull not withstanding). Though it breaks down a little (only a little) at the end, this is a good example of pulling skills directly from an episode's storyline. Worth a good 4.1.

STOCKABILITY: The Terrans are really the better sub-affiliation from the Mirror Universe, and if you're lucky enough to have a FOS, you'll probably use him in your Terran deck. He's a strong OFFICER, but with the actually more useful SCIENCE classification. I'm not just talking about mission attempts, but also about using OS equipment cards. SCIENCE personnel can use both Tricorders to give themselves extra skills (consider that FOS could add MEDICAL, Biology, Exobiology, SCIENCE, ENGINEER, Geology and/or Physics), he's a leader for purposes of Classic Phaser (adds SECURITY to boot), plus whatever you want to share with the Classic Communicator. Yes, he could turn out to have 5 classifications on him at one time. See all those Equipment cards? Well, he can download the most necessary one at any time, either boosting your mission solving power or your assault team's STRENGTH. In addition to the toys mentioned above, he could also add to INTEGRITY and CUNNING with an Agonizer, even more to STRENGTH with a Mirror Dagger, or in some situations, add a Romulan Cloaking Device to his Enterprise. Oops, sorry, I skipped the skills didn't I? Well, Diplomacy x2 is always excellent and not easily found on Mirror personnel. Honor's not too common there either, and is seeing some action on dilemmas. Plus, either of these skills will help you solve Federation missions in the Alpha Quadrant (you really can't stay in the Mirror Universe all game). Transporter Skill remains one of those rarer skills, so you'll be happy to have it along for the ride. Excellent attributes too. Speaking of rides, he's the matching commander for the ISS Enterprise, which can download him to make itself (with Plaque and Log) a more sensible 8-9-9 vessel. He's a Spock, so Agricultural Assessment is easy for him too (as is the closer Mine Dilithium, all you need is the Classic Tricorder). He'll work fine in an Alpha Quadrant crew, and you can get him there easily with AU mechanics either at your outpost, Amanda Grayson's location or directly to Vulcan. Not a game breaker, but an excellent ultra-rare, I think. How about a 4.2?