Who's This? The stinky fascist cheese. 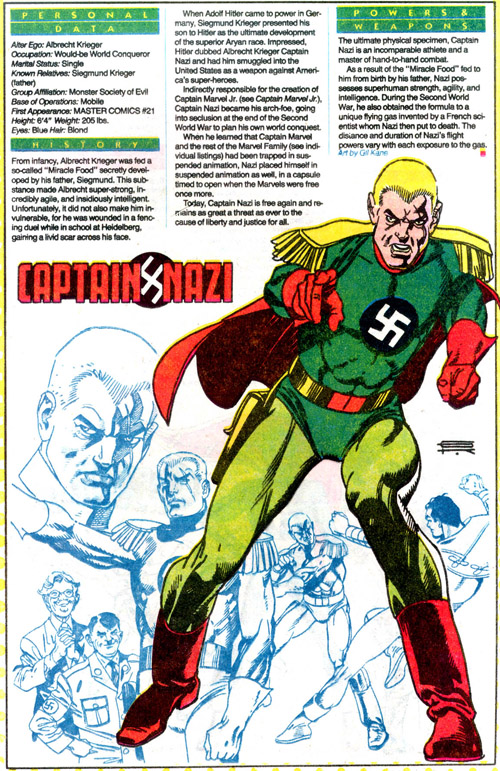 The facts: Created by William Woolfolk and Mac Raboy in Master Comics #21 (1941), Captain Nazi first tangled with Captain Marvel and Bulletman in a crossover story between Master and Whiz, as a prelude to the creation of Captain Marvel Jr. To go with the war theme of many Junior stories, he would become Freddy Freeman's archenemy, facing off against Jr. some 15 times in the Golden Age. When the Fawcett characters were licensed by DC, Captain Nazi moved with them, but didn't make very many appearances. After the Crisis, Roy Thomas introduced a young Neo-Nazi Captain in the pages of Action Comics Weekly (1988), but the real deal finally shows up in Ordway's Power of Shazam series, active since the 1940s and connected to Freddy by having killed his grandfather. He later appears in Villains United, gets cybernetic eyes, leading a Nazi team in Justice League of America, and fighting Wonder Woman in the One Year Later comics. He fought Superman in a New52 Annual.
How you could have heard of him: He appeared in the Legends of Tomorrow episode "The Justice Society of America, part 2", played by André Eriksen.
Example story: Master Comics #21 (December 1941) "The Coming of Captain Nazi" by William Woolfolk and Mac Raboy 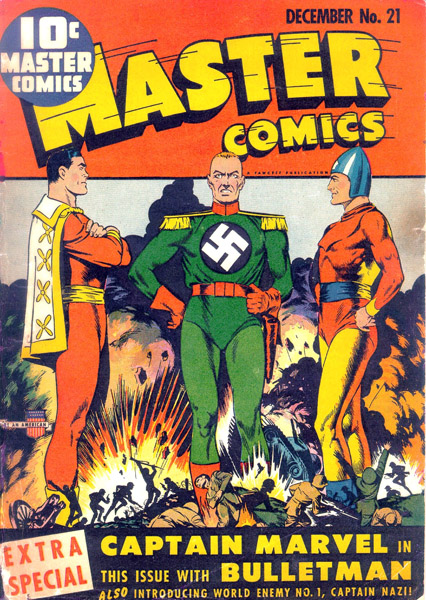 Since we so recently covered a Captain Marvel Jr. story, I decided to go back to the beginning, just to see how Captain Nazi fares against other heroes. The splash page to Nazi's first appearance has him challenging ALL the Fawcett heroes, standing over someone he murdered and in front of a burning farmhouse. He's a concern from page 1. The Scourge of Europe is in fact pointed to issue that challenge by none other than Hitler himself.

This is Adolf's way to use America's own strategy against it - i.e. SUPERHEROES. Nazi immediately smashes the portraits (and that's about it for his fights with Spy Master and Minute-Man), bends a steel bar, and jumps up on a balcony, suitably impressing Germany's generals. And with that, he's off to the States. First stop: Wherever Bulletman hangs his pointy helmet! 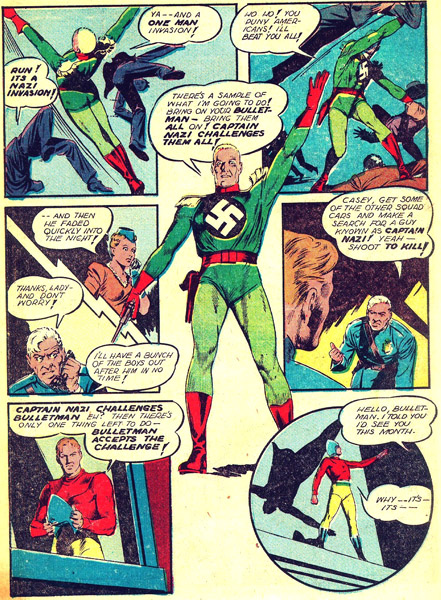 But who's that, crossing over from another book? It's Captain Marvel himself! (Fawcett was a true shared universe in the modern sense, while the DC of the time largely kept things in specifically shared team books.) The heroes fly around Fawcett City (or wherever) looking for the One-Man Blitz, but can't find him, cuz he's gone underground. 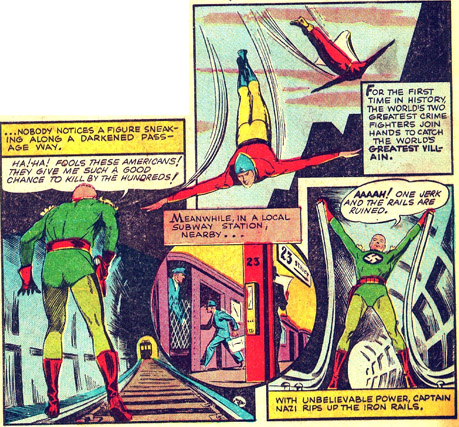 Bulletman and the Big Red Cheese save the train, obviously, but Captain Nazi continues his rampage, next hitting some fairgrounds, HARD. 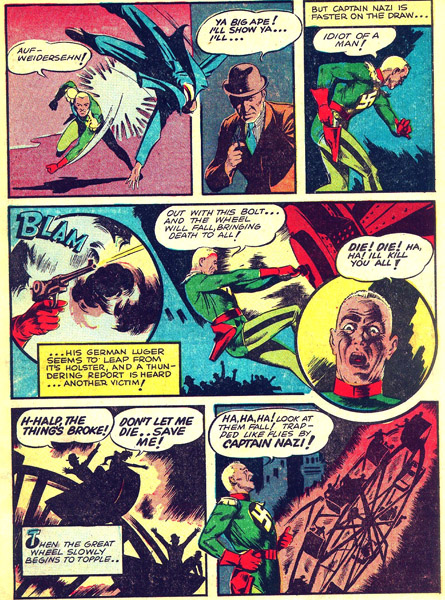 This is really intense for a comic in which the usually whimsical Captain Marvel appears. Nazi may have met his match when he clashes with Bulletman though. 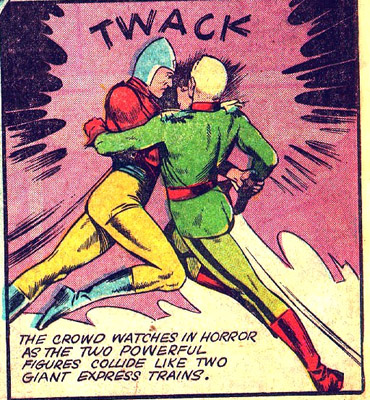 Here's one man who won't bow down to a gun. To provide a diversion, Captain Nazi throws a little boy off a cliff and escapes, gloating about having "settled a score for the Fatherland". Nazis really do have it in for everyone. A million dollar bounty is soon put on his head, which doesn't deter him at all. He threatens to blow up the Brooklyn Navy Yard (so is Fawcett City really New York?), which puts him in Captain Marvel's crosshairs. 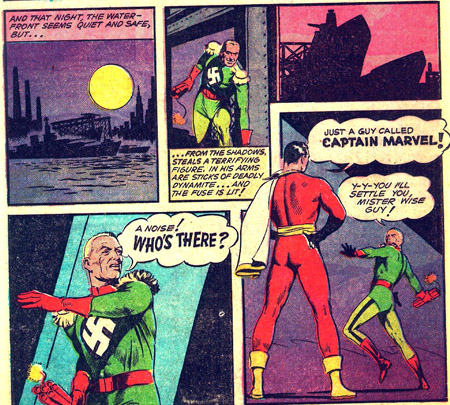 But he escapes one again, becoming the first villain in the larger DC comics history to rampage across multiple issues of several series before he can be stopped. I'm pretty sure about that. And he knows it: 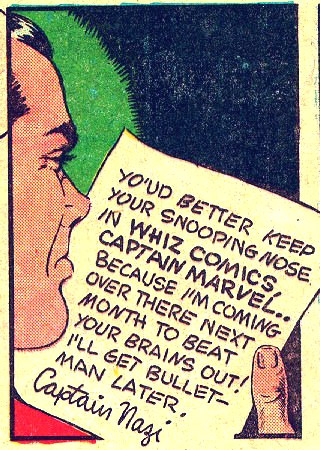 Many comics features were pushing for American involvement in World War II, and this is an example. The USA entered the war in December of 1941, which is this comic's cover date, though it would have been on sale before that. Captain Nazi is an immediate threat, more ruthless and violent than most of the company's output. Once Germany was defeated, he was laid to rest, but what he represents continues to present an existential threat to life and liberty, and so Captain Nazi is bound to keep showing up for his periodic trouncing.

Who's Next? A P.T. boat skipper.
Captain Marvel Comics Golden Age Who's This?

LondonKdS said…
Wonder if that inspired the fairground climax of the Shazam movie?
October 23, 2021 at 8:39 PM