"My spirit will know how to fly." 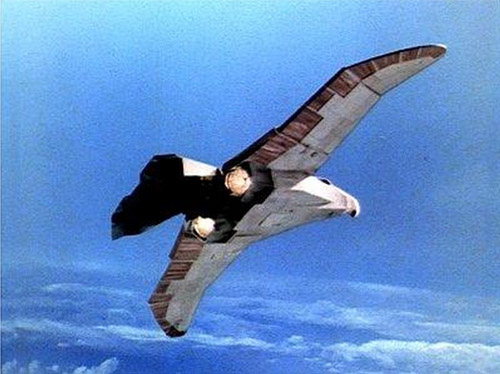 REVIEW: Without warning or explanation, Buck Rogers in the 25th Century comes out of hiatus+writers' strike with a completely new premise, by which I mean a terribly old one. It's Star Trek with a Battlestar Galactica angle. The show was retooled at the behest of incoming producer John Mantley, whose experience was all in westerns, so he's going to apply western premises to the show. That's not a problem in and of itself, since western tropes generally fit space opera better than cops & robbers, which is what Season 1 was like. But here it makes Buck Rogers more generic, and it's the changes that come with the new premise (some of them, retcons) that feel like big mistakes. The sailor uniforms are chief among these for me. They look ridiculous, have nothing to do with established uniforms, and they make Wilma look like a air hostess. Buck doesn't wear one, thankfully, but while he could be an independent "choosing to help" Terran forces in Season 1, this new set-up begs the question as to where he fits in the command structure. The Searcher itself is an ugly sex toy of a ship, and the shuttle and fighter interiors don't look like they fit the models anymore. Twiki's new (but temporary) voice is a great cost saver, but now he's not even TRYING to be funny. Wilma's personality has also gone through some changes - she has more of an edge in her interactions with Buck, teasing him with little jealousies before breaking out in smiles or forced laughter. It's very awkward. But that the same time, she's less capable, always leading the old scientist by the hand and getting stuck in spider webs. It's likely to get worse. Plus, they replaced William Conrad's opening voice-over with a more generic TV announcer's... WHY???

And then there's the replacement characters. Dr. Huer has been split in two. The leadership half is now Admiral Asimov, a hapless "authority" figure who lets Buck and Wilma do whatever they want and defers to them in everything because they're the stars. A useless cog in this machine - just make Wilma the ship's commander - bringing nothing either as a character or as a "role". The comedy and science aspects of Huer's character are taken on by Dr. Goodfellow, a doddering eccentric - Wilfrid Hyde-White plays him in a sort of improvisational style, though it may just be part of a massive fluff (he amusingly calls Easter Island, Eastern Island" at one point) - and it gets tedious fairly quickly. One of the biggest changes the show's undergone comes through in his interactions: Now 25th Centurians seem to know everything about history. There's no fish out of water stuff (except with total aliens), and people (not just Goodfellow) can make references to pre-holocaust stuff easily. There's mention of an "archive", but details are slim; it's currently being digested by a smug robot, Crichton, something of a cross between C-3PO and a bottle opener, but his superior shtick doesn't seem like something you'd want on the show week to week. There's a reason they made Theo personable. There's another new character, Hawk, and this is really HIS story.

So one of the things Season 2 is interested in is Chariot of the Gods/New Age Atlantis type stuff, which is a dodgy proposition because it was BSG's thing, first of all, but also because it tends to push a fantasy agenda. Case in point, Time of the Hawk suggests that in the time of Atlantis, there were bird men on Earth, bird men responsible for the statues on Easter Island, and who fled to space after being hunted by humans almost to extinction (because humans just like to kill birds apparently). There goes the fossil record and notions of evolution (there's just no time for the changes mentioned to occur). Make the bird men aliens who may or may not have come to Earth and the story can make sense. As part of OUR history/prehistory, we know too much to easily suspend disbelief. But Hawk, the last of his race, is such a striking, noble character that I want to forgive all that. He and his mate are interesting characters, I feel for them, and when he is invited to stick around the Searcher (as a sentence for his vengeful war against humanity - though the actual humans responsible, who also give Buck some trouble, don't really get their comeuppance), I was happy to have him stay. He brings a lot of gravitas, a cool look, bird-like movement, and a massively cool ship. Since he's alone in the universe, he can share in the Searcher's mission to find humanity's lost colonies, because there may be bird man colonies out there too. Only the inclusion of Hawk really justifies the new "find the lost tribes" premise, because otherwise, this episode could have been done as a Season 1 story - Hawk could have been raiding human outposts near-ish to Earth, and anyway, the Searcher uses a stargate to get there. It's not an "exploration story" yet.

The allegory is clear (since this plot started life as a Gunsmoke episode, apparently). Hawk is coded to be Native American, resolved to kill all white men for the massacre of his tribe. The outrage is justified, even if the anger is misplaced. Buck is going to have to show him humans can have honor over and over again until Hawk trusts him. He throws his gun down first, he helps carry his wounded mate Koori (a character who weirdly starts out as a bubblehead - was BarBara Luna trying to do a "bird brain"? - but is just as changed by the massacre as she's very serious and earnest later), and makes an impassioned speech to the court when Hawk stands trial. It's not what Gerard is best at, a little one-note, but I felt it was effective. It's quite a serious show, where a lot of people die and corpses lie around in the sun, which is certainly a change from the almost-nerdy family hour attitude that prevailed in Season 1. The best death, however, belongs to Koori, an extended sequence where she and the Llama (who looks like he walked out of a Bible movie, but worships Vishnu, which somehow figures into the bird people's mythology - it's one thing to play with myths, it's another to understand them) discuss her immortal spirit. It's strong stuff, and gives the character a great send-off that gives Hawk a death wish. Like a trapped animal, he fights Buck (big "Arena" vibes) and when captured, will basically let himself be executed. He's given up. So I'm glad to stay on Koori's final moments like they do. There's nothing glib about it, and it doesn't come off as a "fridging" either. Ultimately, it makes us care for Hawk more deeply. In a way, they've created a new Buck, a man who has lost everything and needs to find a new purpose and family, while Buck himself has become part of the status quo. The two heroes certainly relate to one another, but I wonder if they can actually share the screen comfortably.

SPACE DISCO: This season, we might leave the disco behind, I don't know, but that wood-paneled lounge is definitely of the era.

STAR GAZING: Wilfrid Hyde-White (Dr. Goodfellow) is in a number of great films from the Golden Age of Hollywood, most famously as Pickering in My Fair Lady, but sci-fi fans will recognize him as the narrator in Battlestar Galactica's intro (and in the Council of Twelve besides). Dennis Haysbert has been promoted from  spaceport guard (in A Dream of Jennifer) to regular bridge crew on the Searcher (the character's name is Lt. Parsons, but he will be generally billed as Communication-Probe Officer or Helmsman). BarBara Luna (Koori) will be most recognizable to readers as Marlena Moreau in Star Trek's "Mirror, Mirror". David Opatoshu (the Llama) will also be immediately recognizable to Trek fans, as he was Anan 7 in "A Taste of Armageddon". Sid Haig appears here as Pratt, even though he'd been a different character in the previous episode (though it's been months).

ALL THIS HAS HAPPENED BEFORE: Buck's shuttle is right out of Battlestar Galactica, but most damning is the phrase "the lost tribes of Earth" which makes the Searcher's mission really that of the sister show. I've already mentioned Hyde-White's relationship with that show. The Searcher is essentially the model presented as the Lyran Queen, the luxury liner in Cruise Ship to the Stars. They've gone and named a character Asimov, and he's apparently a descendant of Isaac - the 3 Laws of Robotics are referenced and apply in this future. It's hard to look at Hawk and his people and not think of Flash Gordon's Hawkmen.

VERSIONS: When split in two for syndication, Part 1 ends with the crash in the jungle.

REWATCHABILITY: Medium-High - The changes in and of themselves get a Low, but I found the story itself genuinely engaging.
Buck Rogers

Gene Hendricks said…
Sorry, Siskoid, but I have to correct you on one point. The "the narrator in Battlestar Galactica's intro" was Patrick Macnee, who was also Imperious Leader / Count Iblis. Wilfrid Hyde-White was, indeed, on the Council of the Twelve, but that was only in one episode.
November 3, 2021 at 9:49 AM

Siskoid said…
Once again misinformed by the Buck Rogers episode guide.
November 3, 2021 at 10:28 AM

Mike W. said…
Yeah, this feels like a completely different show (new premise, new outfits, new characters, new personalities for old characters) with some of the same cast. I gotta say, from a more unenlightened point of view I kinda like the new outfit Wilma wears, but then I always was a leg-man.

It definitely has a Star Trek feel to it; the way the scenes on the bridge played out made me think of TOS immediately. Dr. Goodfellow is tedious, but Crichton (whose look reminds me of Meckaneck from Masters of the Universe) is a total pain in the ass. For me, his insufferable attitude is way more annoying than anything Twiki did in Season 1. And do I ever miss Mel Blanc ... Twiki's new voice sounds like a five year-old doing a Marilyn Monroe impression.

Interesting to see Lance Legault as a bad guy, since I'm used to him as Colonel Decker on the A-Team. Too bad we didn't get a big brawl with Buck and Hawk against Flagg and his thugs.
November 3, 2021 at 10:53 PM